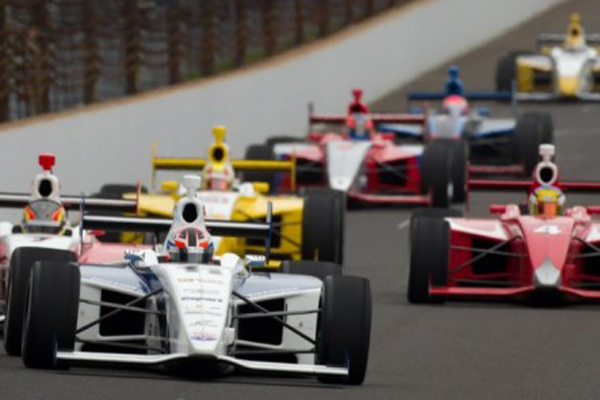 Two major smashups marred the 40-lap Firestone Indy Lights Freedom 100 at Indianapolis Motor Speedway on Friday as Sam Schmidt Motorsports’ Josef Newgarden navigated the 100-mile test for his first win at the Brickyard. Teammate Esteban Guerrieri finished second and Victor Garcia of Team Moore Racing completed the podium in front of an estimated crowd of 100,000 fans gathered for Carb Day at The Brickyard.

“This is unbelievable,” said the winner post-race. “This is a wonderful achievement for the team and for Sam (Schmidt). It means so much to him, and I am grateful to give him the victory.”

“This is the one race that everyone wants to win most,” Schmidt said. “I say a prayer of thanks for all the success we’ve enjoyed here over the years and again today.”

Multicar crashes knocked out almost half the field, and brought the close of the race under yellow flag conditions. On Lap 8, rookie driver Victor Carbone spun in Turn 1, damaging the left rear of the Dallara. “It was tough to find clean air back in the field,” he said later. “I just lost it.”

Another yellow came out again four laps later when three cars collided in the same location on the track. James Winslow, Gustavo Yacaman and Juan Pablo Garcia dropped out of the competition from damage that ensued.

Another incident on Lap 28 put rookie Duarte Ferreira and Brandon Wagner on the sidelines. Finally, Anders Krohn, Jorge Goncalvez and Clauson went three wide into Turn 1 on Lap 35, igniting a fiery crash that left Goncalvez wheelless and aflame. Krohn retired with damage from the incident. Clauson continued the final five laps under yellow.

The win is Newgarden’s second career victory in the Indy Lights series, and leaves him atop the championship standings on 151 total points for the season. It marks the sixth time in the Freedom 100’s nine-race history that Sam Schmidt Motorsports has taken home the win, earning with it the $30,000 payoff for first place.

Goncalvez and Yacaman were transferred to Indianapolis Methodist Hospital for further evaluation of neck pain in awake and alert condition. Krohn was checked and released from the infield care center.