F1: Korean Grand Prix An Eye Soar On The Formula One Tour 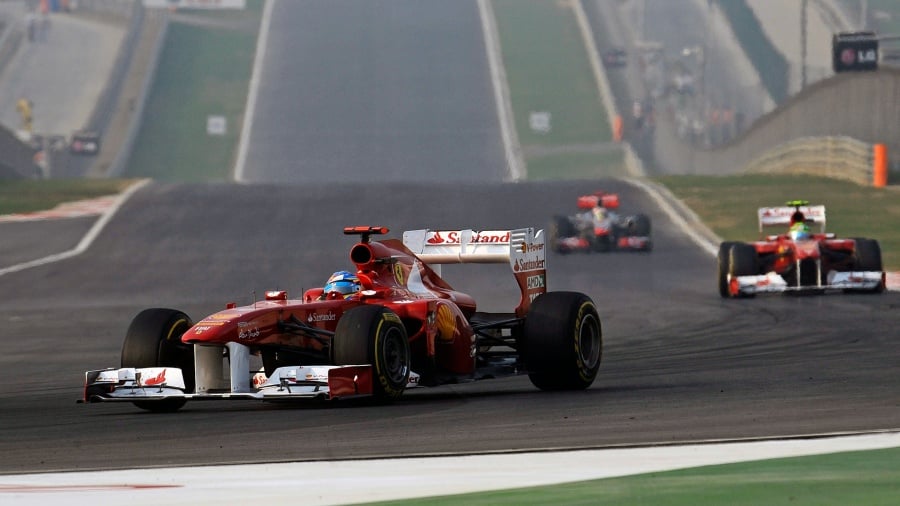 (OCTOBER 16TH, 2011) – Formula 1 returned to Yeongam, South Korea for the Korean Grand Prix hosted at the Korean International Circuit. The track has taken some criticism over the past two years, it’s one of the newest tracks on the Formula 1 calendar, a virgin to F1 just last year and yet it’s appearance and major design flaws such as it’s unsafe pit exit would say otherwise.

Most new tracks are designed with a magnitude of run off room which provide safety and damage control given an off track venture from one of the the multi millon Formula 1 machines. In the case of the Korean International Circuit the eye soar of unpainted concrete walls are placed just inches to the outside of the track for a large majority of the lap. The complex itself appears to be more of a construction site over a glamorous F1 facility and it has been reported after last years F1 event the gates were locked and untouched until one week prior to this weeks event. The circuit lacks the angelic beauty we expect to see from any modern F1 event when compared to recently built tracks like Dubai, Singapore or even India which might also explain the lack of spectators over the weekend.

It was the first time all year a car other than a Red Bull would start on the pole. Lewis Hamilton who started P1 grabbed the early lead heading into turn 1 as Vettel slid into an unfamiliar 2nd with Button trailing. The two Ferrari’s who made up row three also failed to make up any ground at the start.

As lap 1 continued tiny raindrops began to fall as Vettel worked the McLaren Mercedes of Hamilton. He dove to the inside several times for failed attempts but before the lap was complete he would take away the top spot. Massa the Ferrari teammate to Alonso worked his way to the top 3 as Button locked up his front tires forfeiting the position but Webber quickly took both positions away and found himself in 3rd, it was the first time all year Webber advanced his starting position on lap 1. Meanwhile, at the front as if we have all viewed this movie before, Vettel pulled a 1 second gap on Hamilton as they crossed the line to complete the first lap of the 55 scheduled.

As the teams anticipated rain they would all avoid pitting as long as possible on the already relatively short lived Purelli tires. By lap 17 most front runners had made their pit stops. Unfortunately, 7 time F1 champion Michael Schumacher would bring out a safety car leaving parts all over the track as Petrov drove clear over his rear wing and nearly took out Alonso as well. Schumacher with his calm and collected personality was interviewed shortly after the incident, “That’s Racing” and said he had no idea Petrov was coming. As the safety car pulled in Vettel again resumed as the leader with Hamilton in pursuit.

By lap 31, Webber teammate to Vettel had put his Red Bull back into the show, latching right onto the rear wing of Hamilton. This put the top three machines under a blanket which was a somewhat unfamiliar sight thus far during the 2011 season of the Vettel show. The rear tires began to quickly fall apart on the McLaren Mercedes and Webber saw his opportunity to pounce. As the two began swapping inside to outside, corner after corner Hamilton was able to hold off the position just as the team reported, “box this lap” instructing Hamilton to pit for tires.

As Hamilton pitted the Red Bull of Webber also hit the box. Usually, the Red Bull team is untouchable when it comes to pit stops. However, this time Hamilton would beat him to the end of the pit lane holding the position. The battle would resume right where it left off before pitting as the two sliced and chopped each other all the while swapping positions. In the distance you could see the 4th place car of Button closing as these two slowed.

20 laps remaining, Vettel pits and returns to the track in a league of his own turning the current fastest lap of the race. The gap was 9.9 seconds back to Hamilton.

As the battle for the 2nd spot on the podium resumed Hamilton radio back to his team for more front wing, as the front of his machine was losing grip to the racing surface. “You’ve got everything we’ve got” replied the McLaren Mercedes team. Implying the max front end downforce adjustments had already been made.

10 laps remaining, Vettel ahead by 11.2 seconds. Webber still pressing Hamilton for 2nd with Button pushing hard to join the battle. The Red Bull machine reached 312 KPH compared to the McLaren at 292 KPH at the straight’s end, showing the massive performance or gearing difference in the two machines. Again, Hamilton began to see the rear tires degrade impairing the performance of the McLaren.

7 laps remaining, Button has closed to within 1 second of Webber allowing him to use the DRS (Drag Reduction System), a new piece of F1 technology introduced to facilitate more passing in the competitive F1 series. It allows a transformable rear wing to open, essentially removing the downforce of the rear wing for more straight line speed over the car ahead. However, as Webber saw Button closing he forced a move to the inside of Hamilton grabbing the 2nd position, moments later as the two crossed the DRS zone the rear wing slid open on the McLaren and Hamilton regained the position.

4 laps remaining, Vettel in his own zipcode. Webber sets the fastest lap of the race and still stalking Hamilton. Button and now Alonso in 5th following closely emulating Button’s style. 2, 3, 4 and 5 all under a blanket as the end starts to appear and lapped traffic comes into view. Radio from Ferrari team to Alonso, “Use it up.”

2 laps remaining, Radio from Alonso to team, “I give up, I give up.” He is still in the DRS zone under a second behind Button.

At the end of the day the track may not be as spectacular visually as we expect to see from the highest division of the motorsports industry. However, as race fans all we should carry anxiety about is the quality of racing itself and while Vettel dominated the event the rest of the field showed a fair share of hair raising action. At the same time the racing complex has the opportunity to add to the intensity of the racing such as the case of Monoco or Singapore where multimillion machines are racing through city streets or in Dubai where the building structures themselves give the appearance that we are racing in the future on a faraway planet much like the actual design of these dream machines. Many will ask as they did last year, “Should we return to Korea?”