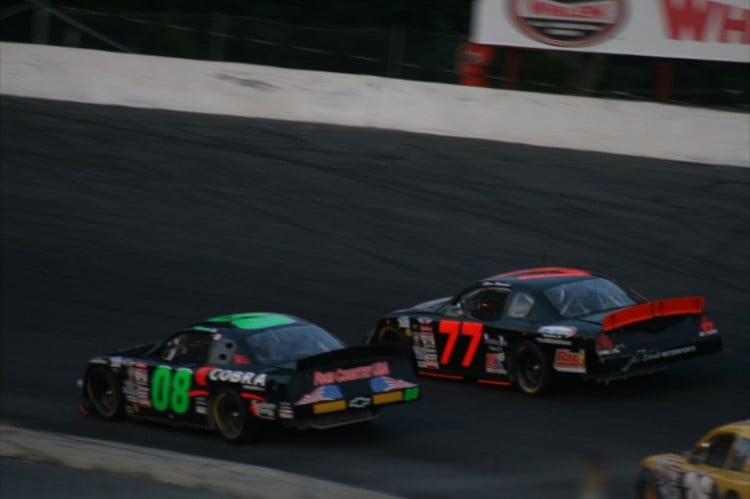 ST. LOUIS, MO (JUNE 26TH, 2012) Sixteen year old Ryan Heavner entered the Caraway Speedway gates for the first time last Saturday. This would be Heavner’s twenty-second time on the CARS Pro Cup Series starting grid and he had set high expectations on both himself and crew leading into the event. The entire team delivered and exceeded expectations, crossing the line fifth at the conclusion of the event.

The Bob Schacht Motorsports crew unloaded the #77 machine and found themselves toward the top of the time sheets in opening practice. As second practice got underway Heavner felt very comfortable with his machine, however driving it just a little deeper into the corner searching for those all important tenths of a second resulted in a meeting with the outside concrete wall halfway through the practice session.

Instantly, the crew rallied together and went to work with repairs on the #77 car. Through the torridness of the day, the team replaced all the parts they could to get it ready for the scheduled qualifying session. They succeeded, however so often with major repairs the car didn’t feel the same to the driver as he laid down his qualifying laps. Heavner was able to grab tenth spot on the grid, setting up for an uphill two hundred fifty lap battle on the half-mile single grooved oval against some of the toughest competitors in the nation.

As the green flag dropped on the main event Heavner found himself feeling out the car searching for what he felt as they unloaded the chassis for practice. He pitted early in the race for much needed adjustments to tighten up the racecar and get it to rotate the center of the corner. After the chassis adjustment he began climbing through the field.

The one hundred twenty five lap halfway mark was reached, Heavner crossed the line in the seventh position. Series regulators then brought the field of cars into the pits to make adjustments and grab a new set of tires. The team took full advantage of the opportunity, changing the height of the track bar.

As the cars were directed back onto the racing surface the top 8 cars from the first segment would be inverted, placing Heavner on the outside pole for the start of the final half of the event. The team was eager to see if the changes made to the car would improve it’s handling performance.

The green flag dropped on the field, Heavner pushed hard on the outside simultaneously pinching the leader down and grabbing the top spot. However, he wasn’t able to open a gap on the second place car and soon found himself slipping through the front of the field. Twenty five laps into the final segment the car began coming to him and he settled in the fifth position. The #77 Bleeding Cross machine would finish out the two hundred and fifty lap event in the top five for an additional solid run with Bob Schacht Motorsports.

At the conclusion of the event Heavner is pleased to have a team that gives 100 percent effort from the time they enter the racing complex. He has learned a lot about the car and is faithfully optimistic that the #77 machine will unload at Dillon Speedway on July 14th. Heavner is still searching for his first Pro Cup victory and feels confident the partnership with Bob Schacht Motorsports can deliver on that goal.

Stay tuned to the Ryan Heavner Racing website throughout the racing season for press, race results as well as track photos. Point your browsers to http://www.RyanHeavner.com to check in on the happenings within the team.