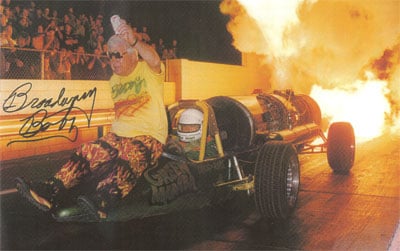 “Broadway Bob” Metzler, the innovative, creative, and beloved owner of Great Lakes Dragaway, died July 27. He was 83 and had been in failing health recently.

Metzler’s Union Grove, Wis., racetrack, which he opened in 1955, was a popular haunt for touring teams of the 1970s and remains a favorite among racers and fans, though he sold his interest years ago. The circus-like atmosphere of his annual Olympics of Drag Racing, a Midwest staple since 1957, was not to be missed. His signature act was to pose on the nose of a jet dragster while it performed its pre-run fire show. Metzler was inducted into the International Drag Racing Hall of Fame and the Jet Car Hall of Fame, quite a coup for a track operator but emblematic of his station in the sport.

A friend reports that in his last visit with Metzler, he said, “Tell all the racers I love them all,” and the feeling certainly was mutual among the legions of racers who answered his siren call to come race at Great Lakes.

In lieu of flowers, memorials have been suggested to the Veterans Assistance Program, 21425 Spring St., Cottage 16, Union Grove, WI 53182, to aid homeless veterans.