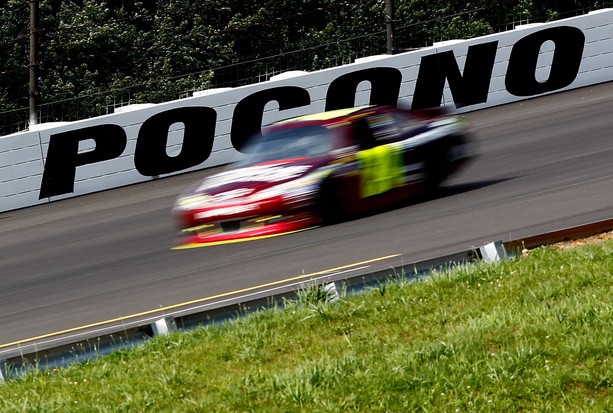 LONG POND, Pa. — Jeff Gordon, one of NASCAR’s biggest rainmakers, got a shower just when he needed it in Sunday’s Pennsylvania 400.

Gordon didn’t lead a lap under the green flag but notched a critically important victory at Pocono Raceway after an opportunistic move to the front after a restart on Lap 91 of a scheduled 160.

Coincidentally, it was a mistake by Jimmie Johnson, Gordon’s Hendrick Motorsports teammate, that enabled Gordon to celebrate in Victory Lane, and, more important, to resurrect his prospects for the Chase for the Sprint Cup.

The victory was Gordon’s first of the season and 86th of his career. It was his sixth win at Pocono and the second there in a rain-shortened race. Gordon took the checkered flag after 106 laps when rain halted the June 2007 event at the 2.5-mile triangular track.

On Sunday, NASCAR parked the cars on Lap 98, after they ran seven laps under caution as rain moved into the area. When what started as a light rain became torrential, NASCAR called the race.

Gordon surged into the lead when Johnson got loose in Turn 1 on Lap 91 and knocked Matt Kenseth’s Ford into the outside wall. Gordon, who had restarted sixth, saw an opening, dodged a handful of cars wrecking around him and took the lead.

“I’ve never seen the seas part like that,” said Gordon, who moved to 13th in the standings and now holds the second wild-card position for the Chase.