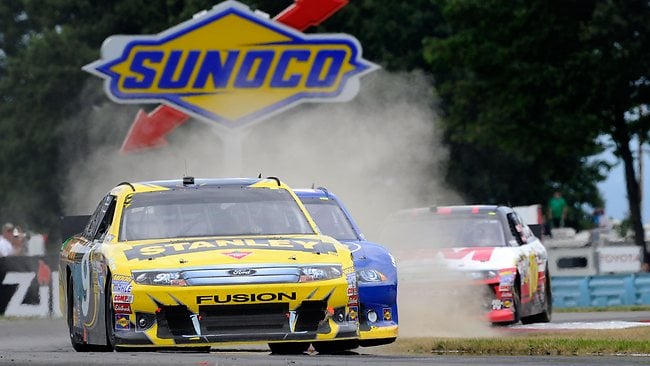 Marcos Ambrose has successfully defended his Watkins Glen NASCAR Sprint Cup Series crown, with the Australian earning his victory after a wild final lap on the New York circuit.

Trading places with Brad Keselowski multiple times throughout the last tour of the oil soaked 3.9km course, Ambrose was only able to pull ahead on the run to the chequered flag.

The result is Ambrose’s sixth career win in the top-two NASCAR tiers, and cements his position in the 2013 Sprint All-Star Race, an event in which Ambrose was a front runner earlier this season.

“Last year was a relief, this year is pure joy,” Ambrose said in Victory Lane.

“You have to take your chances and you have to commit at that point of the race.

“It was great racing with Kyle (Busch) and Brad (Keselowski), and that’s the way racing should be.

“I’m so proud of Todd Parrott (Crew Chief) and all of the Stanley team; they’ve done a perfect job here once again.”

Starting from fifth position, Ambrose lost a spot from the initial green flag, but smartly retook the position from Ryan Newman at the start of the second lap.

By lap four Ambrose had moved past Jimmie Johnson for fourth, before holding station until his first green flag pit stop on lap 20 of 90.

Jamie McMurray brought out the opening caution after 30 laps, with Kurt Busch spectacularly losing a wheel while limping back to the pits.

Staying out under the yellow, Ambrose restarted second, and took the lead on lap 39.

Running away from the field, the Australian led seven laps until pitting for tyres, fuel, and adjustments under green flag conditions. From there, he wouldn’t be scored in the lead until the very last lap.

The second yellow flag for the afternoon flew on lap 58 when Denny Hamlin blew his engine, with the Richard Petty Motorsports crew taking the opportunity to service the car for the third and final time.

With rain closing in, Ambrose restarted from sixth position, but the race soon returned to caution conditions when Jason Leffler stopped on track, as light rain began to fall.

Ambrose aced the restart to jump into fifth, and then passed Kyle Busch and Clint Bowyer in one swift move at turn one.

When Tony Stewart spun into the wall directly ahead of Ambrose with 19 laps remaining, the Stanley Ford was advanced to second position.

Dropping back to third on the restart, Ambrose battled with Keselowski, retaking second for several laps.

With Ambrose’s tyres fading in the closing stages, Keselowski snuck back past on the penultimate lap, with the duo gaining on race leader Kyle Busch as the track became slick.

With Busch spinning out, Keselowski and Ambrose traded positions numerous times on the last lap, often outside the bounds of the race track, with Ambrose gaining the upper hand at the very last turn.

Ambrose moves up one position up in the point standings to sit in 17th after 22 races, and importantly into contention for a wild card entry into the championship ending Chase for the Sprint Cup.

Next weekend the NASCAR Sprint Cup Series returns to Michigan International Speedway, the venue of Ambrose’s first premiere division pole position, which he scored in a record time at the Series’ last visit to the facility in June.