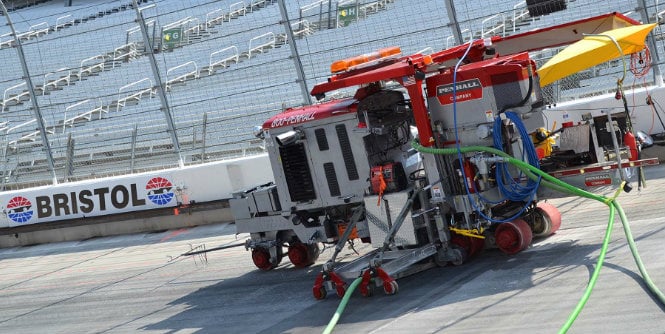 It might seem like a subtle change when fans first walk through the gates of Bristol Motor Speedway this weekend, but a little less concrete should definitely make a big difference to the drivers.

After the race in March, track owner Bruton Smith polled the fans and promised a return to “old-style racing” at Bristol. That put the onus squarely on Steve Swift, senior construction manager for Speedway Motorsports, Inc.

Swift needed to figure out how to accomplish Smith’s stated goal — and how to do it within four months. With that kind of time pressure, the best solution was to grind down the concrete to make it harder to run side by side.

“What we did was looked at how to get rid of the top groove, what would best achieve it with the time we had,” Swift said. “When we redid the track the first go-around, we basically allowed an inch of additional coverage on the rebar for grinding, in case the track was too rough.

“That was foresight we didn’t plan on having to use, but it worked well in putting this plan into place. There’s a 5-inch slab and then a 7-inch slab, and the rebar’s sitting about 2 ½ inches off the bottom.”

Sounds simple in theory, but reality has a tendency to get in the way. Profile grinders aren’t made to work on 30-degree banking, so Swift and the contracting company hired to do the work had to modify heavily the equipment so it would stay safely in place.

“You’re basically defying the laws of gravity and doing things to the machine to make it do things it’s not meant to do,” Swift said. “That was our biggest challenge when we started looking at the machine we had to use.

“At Daytona and Talladega [where the tracks were repaved with asphalt], you’re placing something down, so that’s a little bit easier because you can create equipment to hold it in place. But when you’re removing product and you’ve got to leave the catch fence and SAFER wall in place, it creates a new level of challenges as to how to keep that machinery on that banking.”

Swift said through seat-of-the-pants engineering — and through cutting 4 feet of height off the grinder — the team made enough changes to where they were comfortable that the machine could do the job.

“We went through several modifications and added outriggers,” Swift said. “We basically took a machine that was made to plane bridge decks on a flat surface and put it on a 30-degree slope.”

But how to “recreate” the old Bristol? Much of that came from the data collected by EA Sports when game designers measured the track for their video games.

“Because of the gaming industry today, you have a lot of data as to what the old track was,” Swift said.

Once everything was in place, Swift said the project took six weeks to complete. A tire test shortly thereafter seemed to confirm that cars won’t be able run up top like they had been in recent races. But will it be enough to once again make the fans happy and the drivers mad?

“I think we achieved what we set out to do,” Swift said. “What none of us know — and we’re all anxious to see — is how the drivers and cars actually react to it.