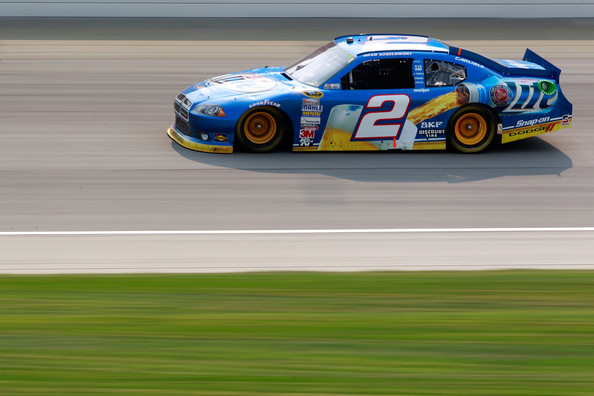 JOLIET, Ill. Brad Keselowski, driver of the Penske Racing No. 2 Miller Lite Dodge Charger in the NASCAR Sprint Cup Series (NSCS), picked up his fourth win of the season by capturing the Geico 400 – the first race in the 2012 Chase for the Championship – at Chicagoland Speedway on Sunday afternoon. The win marked the first Chase victory for Keselowski in his second appearance in NASCAR’s playoffs and his eighth career Cup Series win.

With the victory, Keselowski took over the championship point lead for the first time in his young NSCS career. He now leads the standings by three points over Sunday’s second-place finisher, Jimmie Johnson.

Keselowski began the 267-lap race from the 13th position after his time of 29.793 seconds, or 181.507 miles per hour, around the 1.5-mile oval during the Friday qualifying session. As Sunday’s race began it was evident that Keselowski would be a force to be reckoned with for the rest of the field. He quickly made his way into the top five by the sixth lap of the race. By lap 15, he was turning the fastest laps on the track. As the run progressed, Keselowski radioed to crew chief Paul Wolfe that his car was handling loose on corner entry and exit. However, he was able to claim the race lead for the first time at lap 47, before coming down pit road to the attention of his Miller Lite crew on the next lap. Following a pit stop that included four fresh tires, fuel and an air pressure adjustment, Keselowski found himself running in the sixth position when the pit stops cycled through at lap 50.

With the adjustments having a positive effect on the handling of the Miller Lite Dodge, Keselowski again made his way towards the front of the field. He was still dealing with a loose-handling condition, but it was not enough to impede his ability to turn fast laps around the Chicagoland oval. One of the few times Keselowski fell outside the top five was when he was edged off pit road by several competitors that only took two tires under a lap 68 caution period as Wolfe and the team elected to change all four Goodyears on the Miller Lite Dodge.

Wolfe chose to make his first two-tire call during a lap 102, yellow-flag pit stop. Keselowski restarted the race from the lead and was able to hold off Johnson – who took four tires – at bay throughout the next run. As the race moved past the halfway point, it was clear that this was becoming a two-car race between Keselowski and Johnson. With the balance on the Dodge Challenger now to Keselowski’s liking, it was clear that the race would be won on pit road. The Miller Lite pit crew was up to the task as they got their driver out of the pits in front of Johnson, who had previously held a sizeable lead, on the last stop of the day at lap 230. Keselowski did the rest as he masterfully worked through traffic to beat the five-time champion to the line by over three seconds.

With the result, Keselowski and the No. 2 Miller Lite Dodge team move into the lead in the Chase for the Championship standings.

“I’m just proud of the effort of everyone on the Miller Lite Dodge team and proud of what we were able to do today,” said Keselowski, who was happy to claim victory in the hometown of his car’s primary sponsor, MillerCoors. “It feels like Round 1 of a heavyweight title bout, a 10-round bout. Week 1 is done and we won the round but we didn’t by any means knock them out. We’ve got a lot of racing left to go. We’re feeling good about today but know that we have a lot of work to do.”

Keselowski and the No. 2 Miller Lite Dodge team will next race at New Hampshire Motor Speedway on Sunday, September 23 in the Sylvania 300 – the second race in the 2012 Chase for the Championship. Coverage of the event will be seen live beginning at 1:00 pm EST on ESPN The race will also be heard on the Performance Racing Network and Sirius Satellite Radio Channel 90.