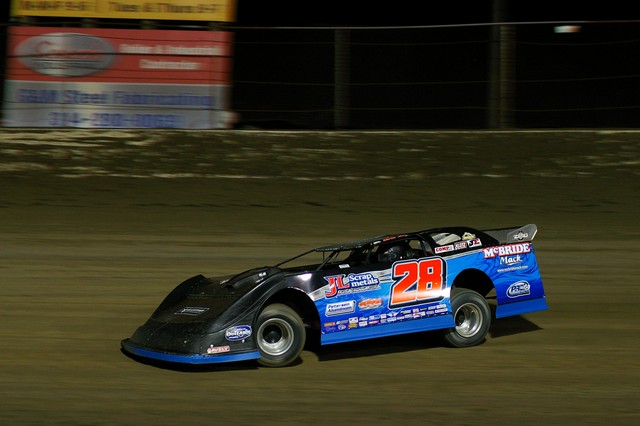 PEVELY, MO – Dennis Erb Jr. of Carpentersville, Ill., pulled off the rarest of feats on the 2012 World of Outlaws Late Model Series in Saturday night’s Pepsi Nationals at Federated Auto Parts Raceway at I-55.

With one of the season’s most memorable drives, Erb outdueled Darrell Lanigan of Union, Ky., for the lead and survived a frantic last-ditch bid from the national tour’s record-breaking driver to emerge victorious in a raucous A-Main that was extended an extra circuit, to 56 laps, by a late caution flag.

Erb, 39, swapped the top spot four times with Lanigan, 42, during the scheduled 55-lap event, with the last lead change coming on lap 36 when Erb dived low in turn three and surged ahead. But the former DIRTcar Summer Nationals and UMP national champion faced tense restarts on laps 48 and 54 before celebrating his second WoO LMS triumph of 2012 and the fourth of his career.

Lanigan offered the strongest late-race challenge, sliding to the outside of Erb off turn two on lap 50 and pulling ahead down the backstretch of the high-banked, one-third-mile oval. But Lanigan skated a bit too high between turns three and four and momentarily rode the outside wall with the right side of his car, damaging his steering and causing him to immediately fall to fourth.

Billy Moyer of Batesville, Ark., snuck by the stricken Lanigan to grab second and was desposited on Erb’s back bumper by a lap-54 caution flag, but the legendary veteran didn’t seriously threaten Erb during the ensuing green-white-checkered finish. He crossed the finish line 0.486 of a second behind Erb, duplicating his runner-up effort in the previous night’s WoO LMS A-Main at Belle-Clair Speedway in Belleville, Ill.

Brian Birkhofer of Muscatine, Iowa, finished third, rallying late in the distance after tumbling out of the top 10 from the fifth starting spot. Lanigan held on to place fourth with a ailing car and 20th-starter Chub Frank of Bear Lake, Pa., charged forward to finish fifth after switching to his backup car because his primary machine was sidelined by a broken rear axle tube during heat-race action.

The race became a showdown between Erb and Lanigan by lap three, when the sixth-starting Lanigan reached second place. Erb had started fourth in his Team Zero by Bloomqusit car and vaulted into the lead on the opening lap.

Lanigan pushed into the top spot for the first time on lap nine. Erb went back ahead on lap 12 when Lanigan was slowed by a lapped car, but Lanigan regained command on lap 18 and stayed there until Erb gained control on the 36th circuit.

“I was feeling pretty good at that point,” said Erb, who earned $10,000 for the win. “I broke away there and I didn’t see anybody for a while and I was hoping that we were gonna be able to finish it. But then we had that last caution there at the end.”

Erb was referring to the lap-48 caution period for WoO LMS Kent Robinson of Bloomington, Ind., whose dream night (fast time, heat win) came to a disappointing end when he slapped the backstretch wall while being lapped by the pacesetter. With his two-second-plus edge over Lanigan wiped out, Erb had to withstand a withering attack from the hottest World of Outlaws driver of 2012.

“I seen Darrell up there getting a run on me and we just kind of kept our line,” said Erb, whose previous WoO LMS victory this season came on Feb. 23 at Volusia Speedway Park in Barberville, Fla. “I just put it to where the car was working and where I could try to get through the corners as fast as I could.

“The car just performed great tonight. It’s been kind of an up-and-down year for us so hopefully this gives us some momentum for the end of the year. This is a good win here tonight.”

Lanigan’s hopes for pushing his single-season WoO LMS win record to 15 were dashed when he slid into the concrete wall between turns three and four just five laps from the finish – a finish that he actually thought was coming that very circuit. He said he mistakenly believed that there were only two laps remaining when the lap-48 caution flew, so he threw caution to the wind in a bid to overtake Erb in dramatic fashion.

Despite a bent front end from his encounter with the wall, Lanigan managed to nurse his car to his 28th top-five finish in 35 A-Mains. He pushed his points lead to 204 points over defending champion Rick Eckert of York, Pa., who finished a quiet 14th.

Shane Clanton of Fayetteville, Ga., finished sixth, rebounding after his night took a turn for the worse following his heat-race victory. Smoke that wafted from his car late in the prelim was determined to be a result of terminal engine problems, forcing him to pull out his backup Kennedy Motorsports car and start at the tail of the A-Main field. He survived a homestretch spin on lap three to come less than three-tenths of a second from cracking the top five at the checkered flag.

Vic Coffey of Caledonia, N.Y., finished seventh; Jesse Stovall of Galena, Mo., settled for eighth after his run from the 13th starting spot to fourth was dulled in the race’s late stages by a crunched rear spoiler on his machine; Randy Korte of Highland, Ill., placed ninth; and Tim Fuller of Watertown, N.Y., rounded out the top 10.

Tim McCreadie of Watertown, N.Y., appeared primed to snap out of a slump after winning a heat race and starting from the pole position, but driveline woes eliminated his Sweeteners Plus car on lap three.

Six caution flags slowed the event, including one on lap 15 for Bub McCool of Vicksburg, Miss., who relinquished eighth place because his car shut off due to a MSD box problem, and another on lap 54 for Pat Doar of New Richmond, Wis., whose homestretch spin marred an outing that saw the struggling veteran climb as high as fourth.

Thirty-six cars were signed in for the sixth WoO LMS event since 2005 at I-55.

Robinson was quickest in Ohlins Shocks Time Trials, earning his first career WoO LMS fast-time honor with a lap of 12.112 seconds. He ripped off the top circuit despite being the last driver to hit the track during qualifying.

Heat winners were Robinson, McCreadie, Clanton and Moyer. The B-Mains were captured by Tim Manville of St. Jacob, Ill., and Michael Long of Quincy, Ill.

The next WoO LMS event will be a history-maker: the Keyser Manufacturing ‘Down & Dirty 100’ presented by NAPA Auto Parts on Sept. 21-22 at Berlin Raceway in Marne, Mich., a famed 7/16th-mile asphalt track that has been covered with clay for a single weekend of dirt action. Time trials and heat races will be run on Fri., Sept. 21, with B-Mains and the $20,000-to-win 100-lapper set for Sat., Sept. 22.


NOTE: Shane Clanton was scheduled to start 8th but was penalized to the rear of the field for the start because he switched to a backup car
NOTE: Scheduled 55-lap race went 56 laps due to a caution that caused a green-white-checkered finish