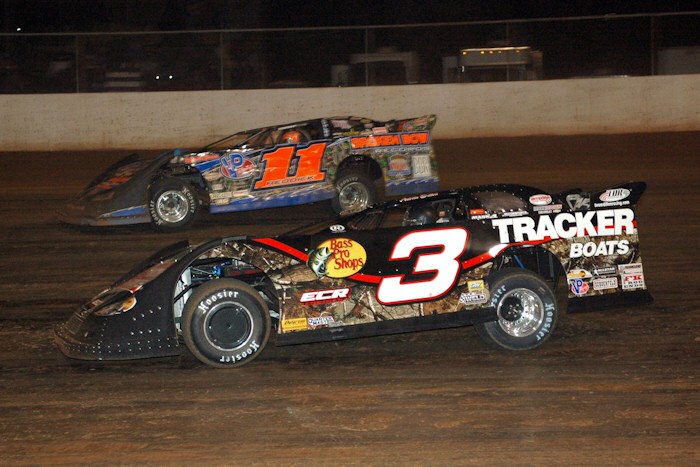 Waycross, GA – The Lucas Oil Late Model Dirt Series and famed promoter Carl Short are pleased to announce that Red Buck has signed on as the title sponsor of the 32ndAnnual Dirt Track World Championship. The Red Buck Dirt Track World Championship featuring Borrowed Blue will take place at Portsmouth Raceway Park in Portsmouth, Ohio from October 18th-20th. This mega event, sanctioned by the Lucas Oil Late Model Dirt Series, will be the final event of the 2012 season and will determine the series national champion.

Red Buck has been a great partner of the LOLMDS for many years, using the dirt late model market and the series as a platform to broaden their brand. By partnering with the series and Carl Short for this event, Red Buck has seized the opportunity to be associated with one of the biggest crown jewel dirt late model events in the country! In addition to Red Buck’s association, series officials are excited to bring Borrowed Blue back to perform a special concert, free of charge, for all the fans that attend the event. Borrowed Blue performed at this year’s Sunoco North/South 100 at Florence Speedway during the after race party. The band entertained all the fans and racers at the party with a great performance.

“Red Buck is happy and proud to team up with the great people at Lucas Oil for the Dirt Track World Championship. Team Red Buck feels fortunate to be part of something that so many people do for the passion of the sport. Our appreciation goes out to all who are involved in the sport of dirt track racing. We look forward to our future relationship with Lucas Oil and the series”, stated Brian Cooper, President of Red Buck and Red Buck Entertainment.

LOLMDS officials and Carl Short are also excited to announce that this year’s Red Buck Dirt Track World Championship, featuring Borrowed Blue will be taped by Lucas Oil Production Studios and will be shown on SPEED this year. This year’s event will be the first time in the history of the event that it will be shown on a TV network. Numerous camera angles, driver interviews, in-car cameras, technical segments, and the 100-lap feature event will be included in the SPEED Channel broadcast. This event is scheduled to air on Sunday November 18th at 2PM EST.

“Red Buck has given so much to the racers and the series. They have worked extremely hard to become such a great icon within the Lucas Oil Late Model Dirt Series and beyond. The wonderful relationship we have with Brian Cooper and Ross Haynes of Red Buck has grown even more within the series by becoming the title sponsor of this year’s edition of the Dirt Track World Championship”, stated Ritchie Lewis.

“These folks also have a very talented band by the name of Borrowed Blue. They are a must-see country music band. We had them come out and play earlier in the year and nobody wanted to leave the concert. The band stayed and visited with the excited crowd and showed there true Borrowed Blue colors by making friends with the crowd and enjoying themselves like people want a band to do when they attend a concert. I was really impressed by their professionalism and the ‘down home feel’ they shared with everyone,” stated Ritchie Lewis, Director – Lucas Oil Late Model Dirt Series.

Borrowed Blue is an up and coming band from Kentucky, sponsored by Red Buck Entertainment, and is set to release its debut single entitled “Porch People” as a formal introduction to radio and its listeners on September 18, 2012. A band of brothers, reigning as self-appointed kings of the Lake Cumberland region, the four member group is made up of childhood friends Matt Cooper (lead vocals), Brandon
Davis (drummer), Jordan Latham (rhythm guitar), and Jay Gregory (on lead electric guitar).

This year’s Red Buck Dirt Track World Championship featuring Borrowed Blue will also include a $3,000 to win Jim Dunn Non-Qualifiers Race for drivers not transferring into the 100-lap feature event. Also on the schedule for the three-day mega-event will be a special $3,000 to win open wheel modified feature as well.

“I’m very excited to be partnering with the Lucas Oil Late Model Dirt Series, Portsmouth Raceway Park, and Red Buck for this year’s event. The staff and folks with Lucas Oil run a very professionally organized show and everyone at Portsmouth Raceway Park have been great to work with. With the added free concert for fans and racers that attend, it should make for a great weekend and a huge event for everyone”, stated Carl Short.

To keep up with all the latest news and to learn more about the Red Buck Dirt Track World Championship featuring Borrowed Blue visit the event website at www.dirttrackworldchampionship.net

To learn more about Red Buck and the band Borrowed Blue visit their official websites at www.tantustobacco.com and www.borrowedbluemusic.com.

World of Outlaws iRacing Series set to debut; Entry list and info for the $1,000 to win show