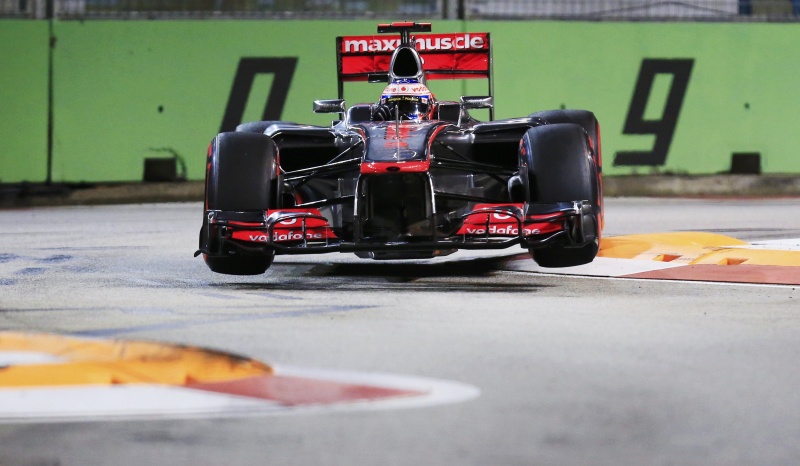 McLaren played down their expectations for qualifying here, but under the lights Lewis Hamilton was fast when it mattered and dominated Q2 and then Q3. Pastor Maldonado’s hot lap came out of nowhere for Williams, while Red Bull’s Sebastian Vettel ended up disappointed to be ‘only’ third after dominating all three practice sessions and Fernando Alonso was philosophical to find his Ferrari not as competitive as it had been at Monza. Qualifying isn’t the race, however, and the winner will be the man who stays out of trouble longest, looks after his tyres the best and whose team minimises the interruption of the almost inevitable safety-car intervention. We take a team-by-team look at qualifying…


Hamilton said his McLaren felt great during his quicker lap, and even though he brushed a wall on his second it was still quick enough to have taken pole. It was McLaren’s 153rd, the first being set by Peter Revson in an M19C for the 1972 Canadian Grand Prix almost 40 years ago to the day. McLaren reported that Hamilton’s car was undamaged. Button struggled on his first run, and said that his car’s rear-end grip went away very quickly.

Nobody saw Maldonado’s best qualifying lap coming – apart from Williams. Lost on set-up early on, they worked tirelessly all through practice to hone the FW34 to suit the Venezuelan’s style, and reaped the big reward as he delivered. In stark contrast, Senna damaged his car in FP3 and again in qualifying and he could yet drop another five grid places if, as feared, the team are forced to change the gearbox as a result.

Red Bull
Sebastian Vettel, 1m 46.905s, P3
Mark Webber, 1m 47.475s, P7
Vettel said he just couldn’t unlock the speed of his Red Bull on his first run in Q3, and that he struggled to improve on his second, though he remained convinced it was in there somewhere. Webber spoiled his first run by messing up sector two, and was later fortunate to escape investigation by the race stewards for alleged impeding of Glock.

Ferrari
Fernando Alonso, 1m 47.216s, P5
Felipe Massa, 1m 48.344s, P13
Alonso and Massa both struggled with their F2012s, which lacked grip in the second and third sectors. It had become clear early in the weekend that the Spaniard’s hopes of fighting for pole would not be realised, but again he got more out of his car than his team mate managed.

Force India
Paul di Resta, 1m 47.241s, P6
Nico Hulkenberg, 1m 47.975s, P11
Di Resta was again in excellent qualifying form and aced Hulkenberg with a strong run which left him fifth until Vettel’s late improvement. What made it more impressive was that his crew had lost their way on set-up and they had had to work together to get back to the right balance after reverting to basics. Hulkenberg said his car wasn’t as good as it had been on Friday either, and that he made too many mistakes in Q2.

Lotus
Romain Grosjean, 1m 47.788s, P8
Kimi Raikkonen, 1m 48.261s, P12
Much was expected of Lotus and a revised aero package here, but neither the returned Grosjean nor Raikkonen was able to deliver. The Frenchman was fastest in Q1, then lucky to survive a half spin in Q2 in which he just missed the wall. He reported that his E20 just generally lacked ultimate grip. Raikkonen was puzzled when he was faster on used tyres than the new set that should have helped him to maintain what at one stage was the fastest time early in Q2.

Mercedes
Michael Schumacher, no time, P9
Nico Rosberg, no time, P10
Both drivers progressed through the early stages of qualifying, with one prime run each in Q1 and two option runs in Q2. Having reached Q3, the team decided not to start a timed lap to enable both to save tyres for the race.

Sauber
Sergio Perez, 1m 48.505s, P14
Kamui Kobayashi, 49.933s, P18
Sauber came down to earth with a bump after their performances in Spa and Monza. Both drivers struggled, Perez after hitting a wall and losing track time in the morning, Kobayashi with oversteer. Making things worse, this was the first time this season that updates haven’t had a beneficial effect on the C31’s performance.

Toro Rosso
Daniel Ricciardo, 1m 48.774s, P15
Jean-Eric Vergne, 1m 48.849s, P16
Ricciardo said his STR7 was better in FP3 than it had been the previous day, but that he was disappointed not to jump both Saubers. But his best lap in Q1 was better than his best in Q2. Vergne said he was dealing with neck pain all weekend after his aviating accident over the Turn One kerbs at Monza which was the result of a suspension breakage. He thus felt reasonably satisfied with the way his qualifying had gone.

Caterham
Vitaly Petrov, 1m 50.846s, P19
Heikki Kovalainen, 1m 51.137s, P20
Much head scratching on the engineering side helped to effect an improvement all through the day as Caterham moved back ahead of Marussia. Petrov reported that it was his Father’s birthday and that immediately after the latter had told him not to push too hard he had crashed his CT-01 in FP3. But he made amends with a better showing in Q1. Kovalainen said that this was one of his toughest weekends as he struggled to find a good balance.

Marussia
Timo Glock, 1m 51.370s, P21
Charles Pic, 1m 51.762s, P22
Marussia were happy that their rear suspension modifications had made the MR-01 much quicker and more consistent, but were very upset that Webber was not penalised for what they felt was impeding on Glock in Q1. They weren’t too impressed either after Pic had been given community service, together with his engineer, after he had overtaken under the red flag for Petrov’s accident in FP3.

HRT
Narain Karthikeyan, 1m 52.372s, P23
Pedro de la Rosa, 1m 53.355s, P24
Karthikeyan was very happy to have achieved what he described as ‘an almost perfect lap’ in qualifying, but De la Rosa said his was not a happy qualifying session as he was struggling with a set if new tyres. His five grid place penalty for a gearbox change made zero difference to his starting position.