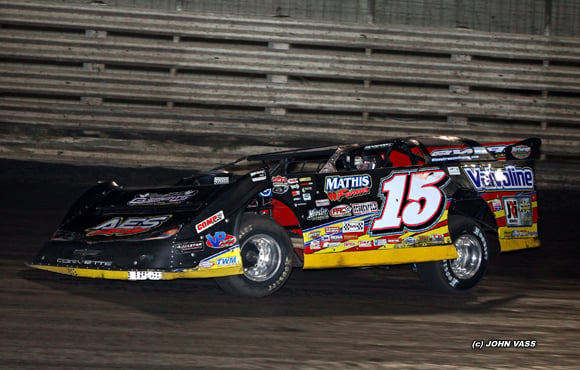 KNOXVILLE, IA – “This is probably the biggest one of my career and like I said I mean no disrespect to the World 100.” Those were the words of Steve Francis in victory lane after he took a late race lead and won the 9th Annual Lucas Oil Late Model Knoxville Nationals. The win paid the Ashland, Kentucy driver a cool $40,000. Francis was clearly headed for this first place finish as he placed 3rd and 2nd in the Thursday and Friday qualifiers respectively.

As the 33-car field pulled away after driver introductions it was apparent that Earl Pearson Jr. was unable to start. Even after he was pushed around the track he was not able to get the car to fire. In his place Jared Landers joined the field. Pearson rejoined the field at the lap 13 yellow and finished many laps down.

Once the race began it was a tug of war between the Scott Bloomquist and Jimmy Owens, the two front row starters. Owens quickly faded and that allowed Brady Smith to duke it out with Bloomquist. Smith was very game in this pursuit and had just taken the lead when the first yellow of the 100 lapper flew for Brian Shirley who was running fourth at the time. Shirley, who started third, ended up going to the pits and staying there.

The restart saw Smith at the point as Brian Burkhofer made a pass of Bloomquist sending him to third. At this point Francis and Owens trailed the front running trio.

As Smith brought the field past the 25-lap mark a yellow was thrown for Landers who had stopped on the track. Smith had pulled away from his pursuers with relative ease and now under the caution those cars were once again right behind him. The ensuing restart saw Birkhofer take his only leading lap as he bested Smith in a blanket finish at the flag stand. That lead was short lived as Smith once again passed and pulled away from “Berkie” on the next go around.

The lap 35 restart saw Francis take the runner-up spot from Birkhofer but each time the race went yellow Smith would pull away from them easily. His race-long line was to power into the turns and at the mid-point he would drift to the top and then power away down the chutes. This worked so well for him that it looked as if no one would be able to replace him at the front.

Winner Francis really came into contention on lap 43 as he replaced Birkhofer temporarily as the second place car. At this juncture the top three cars had come into heavy lap traffic. Bloomquist was still the fourth running car but he never seemed to have that look of a contender. At the half-way point it was Smith, Birkhofer again in second, Francis, Bloomquist, Mike Marlar in the top five spots.

Most eyes were transfixed on the Birkhofer-Francis battle which had broken out early in the race and would not be settled until Francis finally put him away on lap 64. Smith looked like the sure winner as he would always pull away on the restarts.

Lap 71 saw all of that change as Francis caught and passed Smith in lap traffic with the actual pass coming out of turn four. Smith, who had lead so much of this race stayed with Francis, remained close for about five laps then fell back to battle with Birkhofer for the runner-up spot. Francis would later say that he conserved his tires in order to make a late race bid.

The waning laps on this big half-mile oval saw Francis clearly being the car to beat. With these laps going all the way to the finish in green condition, the front runners faced many back markers who were obstacles in the path to victory. Though Smith forged the way, in back of him Smith was able to keep that second place. Birkhofer again battled with Bloomquist and Owens came into contention with both of them.

In the end it was Francis taking the win, his first at this historic racing oval. Smith came across for second and claimed $20,000 while Birkhofer captured third and a $10,000 paycheck. Bloomquist and Owens rounded out the top five finishers.