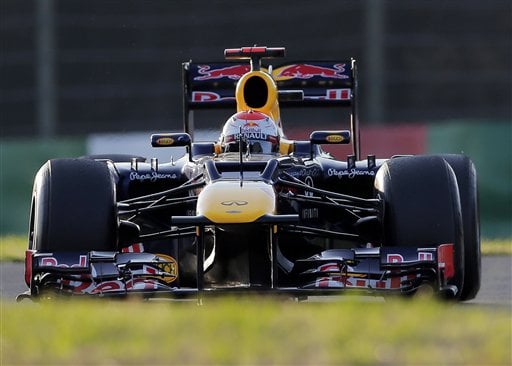 Sebastian Vettel scored a comfortable lights to flag victory at the Japanese Grand Prix to put himself just four points behind Fernando Alonso in the Drivers’ Championship after the Ferrari driver crashed out of the race at the start.

Vettel was followed to the chequered flag by Ferrari’s Felipe Massa, who took his first podium in two years, and Kamui Kobayashi. The third place for the Sauber driver made him the first Japanese driver to stand on a home grand prix podium since Aguri Suzuki in 1990.

The victory, Seb’s third at Suzuka in four years, was defined by the run down to the first corner. Starting from pole, the defending champion got away cleanly and held his lead into turn one.

Behind him, though, things were less cut and dried. Team-mate Mark Webber, starting second was passed by Sauber’s Kamui Kobayashi. Mark then found himself alongside Lotus’s Romain Grosjean, who collided with the back side of Mark’s RB8.

The resultant damage saw Mark detour to pitlane for a safety check and a new nose and tyres at the end of the first lap, leaving him a long road to recovery from the back of the field. The race was re-started before he had joined the back of the pack meaning he was 20-seconds behind.

Meanwhile, at lights out sixth-placed Fernando Alonso found himself under pressure from Kimi Raikkonen who had started just behind. The Lotus driver made a mistake, however, and put a wheel on the grass as he chased Alonso down. The momentary loss of control was enough to send him crashing into the back of the Ferrari and the championship leader was suddenly off and out of the race in a cloud of dust.

Alonso’s woes were all the incentive Sebastian needed. After a brief safety car period he quickly powered to an 11-second lead by the time he dived for the pits for his first stop. He emerged with his lead intact and over the next 20 laps set about extending his advantage as behind him his rivals tussled for the remaining podium positions.

By lap 37 and his final stop, Seb was a whopping 35 seconds ahead of second-placed Felipe Massa and with his lead unassailable, the champion throttled back to cruise to victory, save of course for his almost traditional last-gasp blast in search of the fastest lap of the race.

That was done on lap 52 and with the purple lap in the bag Seb claimed the second grand chelem of his career with pole position, the race win, fastest lap and every lap of the race led. The last was taken in India in 2011.

It was a tougher afternoon for Webber. After his first-lap accident he found himself right at the back of the field in 22nd place but on the hard tyre and primed for a long stint.

He soon began to claw his way through the field and by the time he made his sole regulation stop he was in 10th place and in the points. After that it was all about consolidation and the Australian eventually came home ninth to score two points after a great drive.

With a 27-point haul from the Japanese GP, we’ve extended our lead in the Constructors’ Championship and with 324 points to our credit have a 41-point advantage over McLaren, for whom Jenson Button and Lewis Hamilton finished fourth and fifth today.
The headline news though is that with just five races left Sebastian, with 190 points, sits just four behind Alonso. Since the summer break the defending champion has scored 68 points. There are five more races to go and everything to play for…