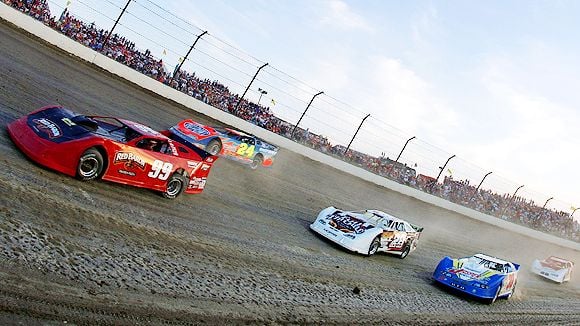 KANSAS CITY, Kan. — The Prelude to the Dream may be taking next season off, but could historic little Eldora Speedway be in line for another major race — like a Camping World Truck Series event?

Track owner Tony Stewart admits he’s had conversations with NASCAR, although the idea has yet to progress any further than that.

“Trust me, I would be ecstatic if we could get any NASCAR race at Eldora. That would be great,” the three-time champion said at Kansas Speedway, site of Sunday’s Sprint Cup event. “I have talked to NASCAR. They have been looking at all kinds of different tracks. It has been brought up in conversation but that is about as far as it has come right now.”

Although NASCAR has released the Sprint Cup schedule for 2013, the Nationwide and Truck series slates for next season have yet to be finalized. Eldora is a half-mile clay oval, and NASCAR hasn’t held a national-series race on a dirt track since a Grand National event at the North Carolina Fairgrounds in Raleigh in 1970.

One thing is for certain — the Prelude to the Dream, the popular charity race that attracts many top NASCAR stars to the Rossburg, Ohio, track, will not take place in 2013. Stewart said an expansion of the Dream, a major late-model race held the same week at the track, made it necessary to put the high-profile exhibition on hiatus for one year.

“It takes a ton of work to put the Prelude on,” Stewart said. “We are changing our format for how we run the Dream, that weekend making it a three-day weekend with that series. We are trying to focus on that a little bit more, and some changes that we think are going to be better for our late-model race. We just needed to take a year off while we focus on that, and make sure that we don’t get overloaded for that.”

The Prelude to the Dream has been held annually since 2005, and during that time has raised millions of dollars for various charities, primarily through pay-per-view television deals. Kyle Busch won this season’s event, which benefited Feed the Children. Stewart purchased Eldora in 2004 from Earl Bates, who built the facility in 1954.

“We have intentions of bringing it back,” Stewart said of the Prelude. “Like I said, we are just changing the format with the Dream this year, so we want to make sure that we have enough resources to focus on that. It made it a little bit harder to try to put the Prelude on the same weekend, so we needed to take a year off with that to focus on the Dream.”