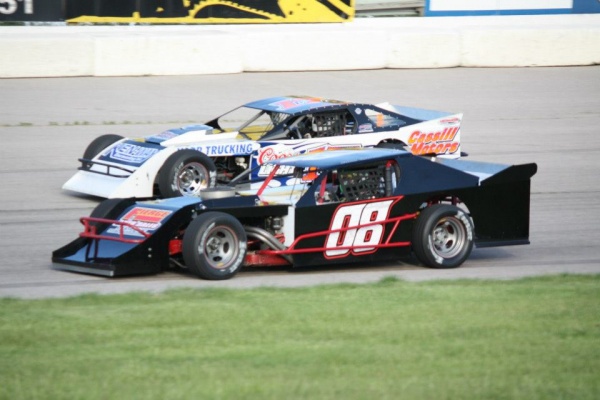 Not only did 14-year-old Jake Griffin’s celebrate a birthday last week, but he also enjoyed a successful debut in the 47th Annual Governor’s Cup, which is one of the toughest, short track races of the year.

The team made the long tow over the weekend to New Smyrna Speedway (New Smyrna, Florida) for the 47th Annual Governor’s Cup at the paved oval. In the American Auto Tire & Service Pro Late Model division with twenty-two entries on hand Jake qualified tenth fastest to earn the tenth starting spot for Friday’s feature. For much of the first half of the event Jake ran just outside the top ten before beginning his march forward. By lap 43 he was up to the tenth position. Over the next several laps he kept working his way forward as he dodged multiple cautions . Late in the race he had one of the fastest cars on the track as he began to reel in the front runners. When the checkered flag dropped on the 100 lap race Jake was credited with an impressive third place finish behind race winner, Brandon Johnson, and Rich Clouser.

In the Super Late Model division, an extremely talented field of thirty entries took to the speedway. Due to Jake’s limited amount of seat time in the car, the team decided to stay in race trim for the duration of practice, and as a result he never practiced on fresh tires, but rather ones with 75 laps on them. Despite being at a disadvantage with only experience on older tires and having to battle tight conditions due to fresh tires, Jake still registered the twenty-second fastest time in qualifications to earn the twenty-second starting spot for the 200 lap race, which marked the longest event of his young career and his 150th start of the 2012 campaign. Early in the feature he raced his way to as high as the twelfth position. At the mandatory lap 100 break Griffin set in the sixteenth position. Unfortunately Jake was collected in a five car incident in lap 19 of the second segment, which ended his night in the 18th position.

Overall it was a great weekend for Jake and the team as they took on some of the best competitors in the nation. Griffin is excited to run more pavement events in the near future as he continues to get more seat time.

The 47th Annual Governor’s Cup wrapped up the 2012 campaign for Jake Griffin Racing. The team now looks ahead to Florida Speedweeks 2013, which will be held in February. Jake will enter a variation of dirt and pavement events during the racing extravaganza. Stay tuned to www.JakeGriffin.net for the latest information as well as a soon to be redesigned website.

Was Cody Sommer surprised with the success of Gateway Dirt in its debut year?