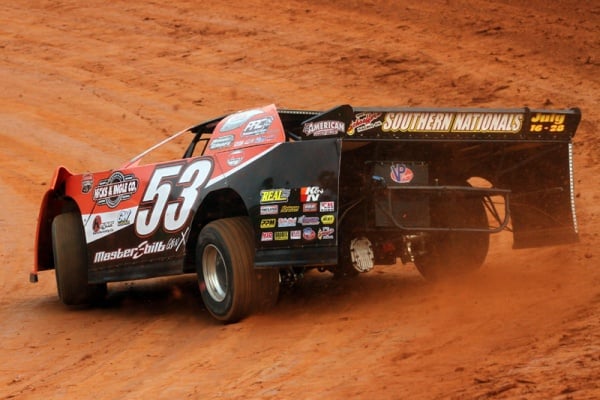 (BRASSTOWN, NORTH CAROLINA) Brasstown, North Carolina star Ray Cook racked up his tenth feature victory and his biggest win of the 2012 campaign in his season finale on November 23-24 at the Swainsboro Raceway in Swainsboro, Georgia! The 12th Annual ‘Turkey 100’ for the Crate Late Models took place over the weekend and a 73 car field converged on the Paul Purvis promoted facility. Ray started his weekend by posting the fastest lap in his group and overall during the qualifying session on Friday night.

The popular driver known as the “Tarheel Tiger” then won his heat race in preliminary action to earn the pole position for Saturday’s 50-lap ‘Turkey 100.’ After trailing outside polesitter Dennis Franklin early in the race, Ray slipped by to grab the point and controlled the talented field through the remainder of the distance. At the end of fifty green flag circuits, Ray was celebrating his $20,000 triumph over Franklin, Michael Page, Mike Marlar, and Walker Arthur. Full results from Swainsboro can be accessed online atwww.swainsbororaceway.com.

“It was just an unbelievable Thanksgiving weekend for us and the Lord has blessed us in countless ways,” exclaimed Cook following the season-ending Crate Late Model win. “The car was just flawless all weekend long and it was so fun to drive that fast of a racecar. I have to thank Keith and Tader at MasterSbilt Race Cars for spending a lot of time with me over the phone at Swainsboro. We all put our heads together and hit on something with our Crate package. All I had to do was not slip up and keep the tires underneath of me for fifty laps and it all worked out for us!”

Ray and the D&R Motorsports team put together a strong fifty-six (56) race season, which was highlighted by the ten (10) feature victories. In addition, Ray also racked up twenty-nine (29) Top Fives and thirty-four (34) Top Tens in the events that he entered this year. Aside from his huge $20,000 win last weekend in Swainsboro, other attention-grabbing victories came in the ‘Ice Bowl’ ($6,000) at the Talladega (AL) Short Track and in night three of the ‘Winternationals’ ($7,000) at the East Bay (FL) Raceway Park. You can access all of Ray’s finishes for 2012 by logging onto www.raycook53.com.

For the latest news and schedule information concerning the #53 team, feel free to visit their official Internet home at www.RayCook53.com.