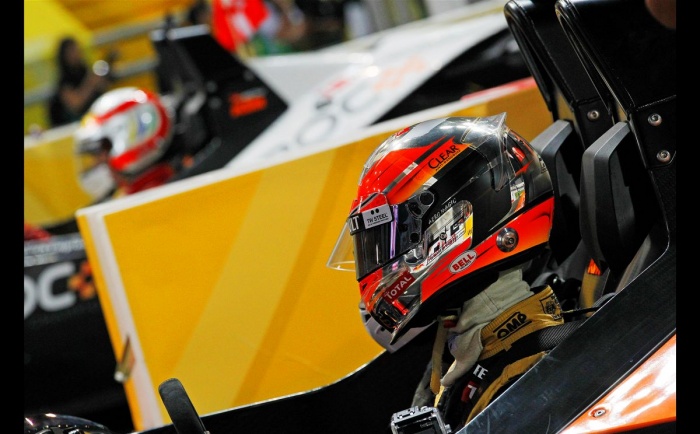 French Formula 1 star Romain Grosjean put in a stunning performance to eclipse 15 fellow superstars of motorsport and win the Race Of Champions on an evening of thrills at Bangkok’s Rajamangala Stadium.

Following Team Germany’s victory over Team France in last night’s ROC Nations Cup, the Race Of Champions pitted many of the biggest names in motorsport against each other in head-to-head combat in a variety of different cars.

In the end Grosjean overcame Le Mans legend Tom Kristensen in the best-of-three Grand Final to become Champion of Champions for the first time. Kristensen, who also reached the final last year, was chasing his own first individual Race Of Champions title at the 12th attempt. But he was thwarted by the young Frenchman, who won both heats to seal glory.

Grosjean said: “That’s what I’d call a crazy day! It got a bit tough in the group stages but I managed to make it through. Then I had to face Sebastian Vettel in the quarter-final before Michael Schumacher in the semi-final – the two Germans who beat us in yesterday’s ROC Nations Cup final. Then I had the final with Tom. We’ve had a good history at this event and I’ve raced him before so it was good to face him in the final. I got a bit of extra luck to be in the right car at the right time but it felt good.

“It’s been a tough end to the F1 season but I finally got back on the podium yesterday, and now this! It’s great to get this win before I head off for a holiday. Thanks to everyone in Thailand because the welcome has been fantastic.”

Beaten finalist Kristensen has competed in 12 Race Of Champions events, more than anyone else in the field. The 45-year-old Dane nonetheless hopes to be back for more.

“This was the 25th year of the race and Romain is a deserving winner,” said Kristensen. “He had a very good Sunday – and I’m getting closer every year! It was a small gap between us in each of the heats and I made small mistakes but that’s the challenge of the Race Of Champions: to jump into different cars. Earlier I had a pretty fun run in the Audi against Ogier. I believe that was the fastest lap of the weekend so that’s what I’ll take away. Even though I’m a bit more than 25 years old like Romain, it shows I’m still pretty fast if I’m in a good car. This has been the warmest Race Of Champions I have competed in – both literally and thanks to the people who welcomed us and enjoyed having us here. I’m still young so maybe one day I’ll get the chance to win it!”

Michael Schumacher seemed to be continuing where he left off last night as he went undefeated until the semi-final stage. There he came up against an inspired Grosjean and his quest for the individual ROC title faltered again. Schumacher’s fellow F1 old-timer David Coulthard was beaten by Kristensen in the other semi-final.

After sharing in Schumacher’s success last night, 2012 F1 world champion Sebastian Vettel was eliminated in the individual quarter-finals for the second year in a row, also by Grosjean. Facing a tight battle, Vettel made a mistake and hit the barrier hard.

Another big scalp at the quarter-final stage was last year’s Champion of Champions Sébastien Ogier, beaten by Kristensen in a reverse of the result of last year’s Grand Final. Coulthard defeated China’s Ho-Pin Tung while Schumacher overcame 500cc MotoGP legend Mick Doohan in the other quarter-finals.

To start the evening the drivers were split into four groups of four, battling for the right to line up in the knockout stages.

Reigning champion Ogier began in dominant fashion, taking three wins out of three in Group A. Coulthard also progressed thanks to his two wins against V8 Supercar king Jamie Whincup and Production World Rally Champion Benito Guerra. Whincup beat Guerra but neither driver made it any further.

Tung was the surprise package of Group B. After falling to an initial defeat against touring car great Andy Priaulx, the Chinese driver recovered to top the group, beating Kristensen and home favourite Nattavude Charoensukawattana. The Thai prompted one of the night’s biggest cheers when he defeated Priaulx, meaning the last quarter-final berth was decided by a shootout between Kristensen and Priaulx. That went to the Dane after Priaulx went off into the barriers.

Vettel made a predictably strong start, romping to three wins out of three including a victory over 2012 MotoGP world champion Jorge Lorenzo. Group C also included another legend of two wheels in Doohan, who defeated Lorenzo in their heat. The Thai crowd went wild as Tin Sritrai beat Lorenzo and crossed the line ahead of Doohan, only to miss out on qualification due to a time penalty.

Schumacher and Grosjean both progressed comfortably from Group D – but it was the German who came out on top this time to keep his undefeated record intact with three wins to Grosjean’s two. 2012 IndyCar Series champion Ryan Hunter-Reay took a single victory against Kazuya Ohshima, Japan’s qualifier from ROC Asia, but it wasn’t enough to keep the American in the competition.

Written By: Race of Champions

F1: Romain Grosjean ‘Did Not Learn’ From 2012 Mistakes Says Villeneuve