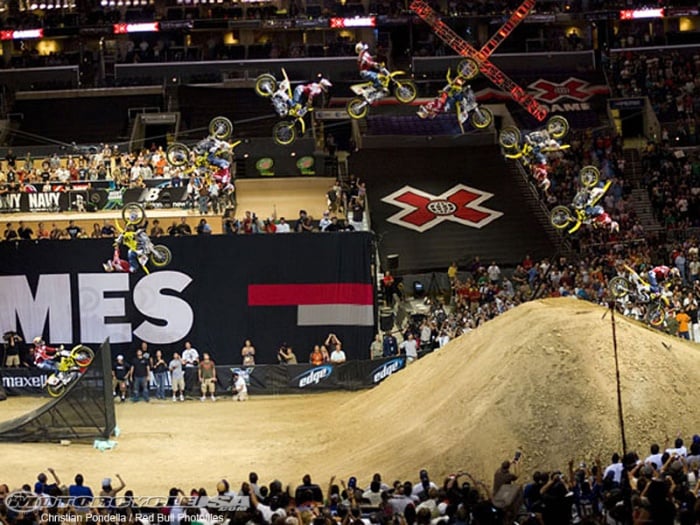 Behind the floppy hair, the easy-going demeanor and the crazy feats on two or four wheels, Travis Pastrana is an athlete who understands the need for structure. He grew up the son of a Marine, and from 4 years old he and his father had an understanding — you want to go to the race track that weekend, you get up before school and run.

“It was just that little extra person looking over your shoulder saying, ‘You don’t have to do this. Nobody is making you race,’ ” Pastrana said Thursday. “But if you want to be the best, you’re going to do this, this and this. I want to do this, plus exceed it.”

It’s a mentality that led Pastrana to take his boldest step yet in NASCAR and agree to a full 2013 schedule in the NASCAR Nationwide Series with Roush Fenway Racing, which has won the last two crowns on the circuit. The X Games legend will pilot a No. 60 car backed by a variety of sponsors, and with Chad Norris as crew chief.

It’s quite a leap, even for an action-sports star who likes to make big jumps. But Pastrana realized if he wanted to succeed in NASCAR, it couldn’t be just a dalliance. That progression required structure, which in turn led him to Roush.

“The last couple of years have just been about fun,” Pastrana said, “and I’m ready to be a racer again.”

Pastrana, 29, made his name in motocross, rally cars and motorcycle stunt jumping, establishing himself as a legend in extreme sports well before he started his first NASCAR race. Slated to kick off a limited Nationwide slate in 2011, he crashed attempting a jump in the X Games and broke his ankle. He made nine starts on the Nationwide tour last season — all but one of them in a car fielded by Robby Benton through an agreement with Michael Waltrip Racing — and recorded a best finish of 13th at Indianapolis Motor Speedway.

His final start of 2012, at Richmond, came in a Roush vehicle, beginning the process that led to Thursday’s announcement. Pastrana said he bonded quickly with the Roush drivers. New Nationwide teammate Trevor Bayne sent him a Christmas card and called him on New Year’s, he struck up a quick friendship with two-time outgoing Nationwide champ Ricky Stenhouse Jr. and he remembered representing the U.S. in the Race of Champions alongside Carl Edwards.

“I feel like I’ve stepped into a family here,” Pastrana said.

Equally as important, he found a team willing to take the step he needed to take to further his NASCAR career.

“Travis is a champion,” Roush said in a statement. “It takes a great deal of drive and determination to reach that level of greatness in any field. He is serious about this move to NASCAR and we are committed to doing everything we can to see his career develop in NASCAR. We would certainly expect to see a great level of excitement brought to the table as he progresses within our sport.”

Pastrana said that between his sponsors and Roush’s sponsors, they cobbled together enough sponsorship to fund most of the 33-race season. If they come out short on funding, they’ll find a way to cover it. “It’s kind of a leap of faith on both our parts,” Pastrana said.

But it’s a leap the driver is more than willing to make.

“This is the first time since 2004 when I was racing Supercross that I’ve really had something to look forward to every weekend, and was judged and criticized and critiqued every single weekend, and that’s what I live for,” he said. “We have the entire season now, 30-something races, to go out there and figure out if I can make it in this sport. And I know I can drive. I know I have car control. But it’s new. It was so frustrating last year to have so many things on the docket. I’d race one weekend and be off four weekends and then come back, and it would be like starting over again. So it definitely should be good.”

It wasn’t always this way for Pastrana. He admits that when he first became interested in NASCAR, he just wanted to see what the sport was all about. He wondered about maybe racing at a road course, maybe racing at Daytona. He settled on the partial schedule, still keeping one (surgically repaired) foot in extreme sports. But he reached a point where he could only go far. “If I want to be competitive with the best in the world … it kind of has to be pounded into your brain a little bit,” he said.

That time is now. Roush wants Pastrana to sit in on both the NASCAR Sprint Cup Series and Nationwide debriefs at the shop each Monday. Pastrana knows he’ll have vehicles tested by someone “probably better than me in every aspect,” he joked, producing detailed information on braking points and lines around the race track. This isn’t just about having fun anymore.

“This is going to change everything about my life,” he said. “This is going to change from have fun every day, no worries, do whatever you want to do, to, I want to go out there, and I want to work my ass off. There’s going to be sleepless nights. There’s going to be crying. You’re going to see a grown man cry. And, figuring out how to be the best again. That’s what we were able to do in motocross, and that’s what we were able to do in rally. I need that in my life. My wife basically sat me down and said, ‘I’m backing you. I love you to death, and we’ll make it work.’ That’s why we’re here.”

Pastrana said Roush reminds him of Roger DeCoster, a five-time motorcycle world champion who was once Pastrana’s team director. He could have fun — as Roush showed Thursday, taking his newest driver for a spin in a World War II-era fighter plane — but he also demanded structure. Pastrana knew, deep down, that if he were going to make it in NASCAR, he needed that all along.

“I knew it beforehand,” he said. “But it takes a while to really sink in and say, ‘What’s this going to take, and what’s this worth for you?’ To me, it’s worth everything. I’ve got a taste of it, and I want to put myself up against the best. I want to see if I can do it.”