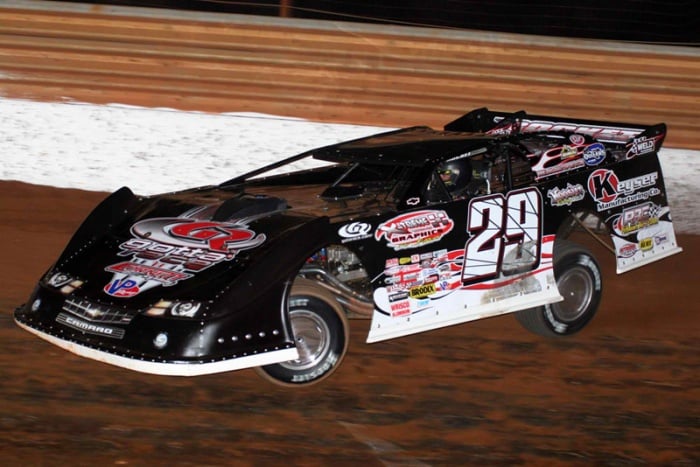 Well, guess again. The ultra-competitive superstar from Union, Ky., basically put his record-smashing season in his rearview mirror as soon as he picked up his $100,000 points-fund check at the national tour’s awards ceremony in early November.

“I never took a day off,” Lanigan said of his off-season itinerary. “Right after the (WoO LMS) banquet we were in the shop and right back at it. We never had any down time.”

There simply was too much work on Lanigan’s docket for the 42-year-old to rest – even for a few short days – on his well-earned laurels. He determined that any break in focus would hinder his preparation for February’s season-opening burst of WoO LMS action, which includes the ‘Winter Freeze’ doubleheader on Feb. 8-9 at Screven Motor Speedway in Sylvania, Ga.; the Bubba Army Late Model Winter Nationals on Feb. 15-17 at Bubba Raceway Park in Ocala, Fla.; and the three 50-lap, $10,000-to-win programs on Feb. 21-23 that comprise half the dirt Late Model portion of the 42nd UNOH DIRTcar Nationals Presented by Summit Racing Equipment at Volusia Speedway Park.

From readying a new hauler to assembling new cars for himself and members of his ‘Club 29’ posse, Lanigan had plenty to keep him busy in the wake of his second career WoO LMS title.

“As soon as the (2012) season ended we sold our truck so that one had to go and I had to go pick up my new one,” said Lanigan, who likes to replace his sharp black race car rig with a new model roughly every two years. “Then we had to work on getting the new truck ready to go and building race cars. We sold two cars (from ’12), built two new ones for myself and redid the car I ran most of the (’12) season, and built a couple cars for (Club 29) customers.

“It’s a pretty short off-season, so if you don’t work hard the whole time you’re not gonna be ready to go racing in February.”

And Lanigan realizes he can’t slack off – not if he expects to have any shot at reliving 2012, a year-for-the-ages that saw him establish numerous WoO LMS records (15 wins, six consecutive victories, three 100-lap triumphs, 228-point championship margin, points leader from start-to-finish) and earn an amazing $426,700. With the drivers he vanquished in ’12 hungry for redemption and two-time WoO LMS champion Josh Richards reportedly planning to return as a regular after spending last season on the NASCAR Nationwide Series, Lanigan just might have to be even better in 2013.

“It’s definitely gonna be tough to duplicate last year, but we’re gonna try,” said Lanigan, who enters ’13 as the alltime winningest WoO LMS driver, with 41 career victories. “Doing what we did last year definitely puts your goals a little higher. I know there’s a lot of guys who are gonna come back stronger to try and beat us, but we’re gonna be as ready as we can be for ’em.

“We’re not changing anything. Our cars (Rocket Chassis), our motor program (Cornett Engines), our crew (Jason Jameson and Adam Logan) – everything is pretty much the same. We’ll just have to see what happens this year.”

If Lanigan needs any extra incentive, he’ll have some when he enters the UNOH DIRTcar Nationals Presented by Summit. While he’s won WoO LMS A-Mains in the past at the two tracks that kick off this year’s tour – he captured last year’s inaugural Winter Freeze lidlifter at Screven and has been victorious once in each of the last three years at Bubba Raceway Park – he’s never triumphed in a World of Outlaws event at Volusia.

Lanigan has certainly enjoyed his share of success at Volusia since tackling the D-shaped, half-mile oval for the first time in 2002. But he’s shined mostly in DIRTcar UMP-sanctioned shows, winning a pair of features (2007 and ’10), scoring three runner-up finishes (twice in ’09, twice in ’12) and placing third on two occasions (’06 and ’09). He owns a pair of second-place finishes in WoO LMS action at Volusia (’05 and ’09), but, in 16 other UNOH DIRTcar Nationals by Summit World of Outlaws A-Mains since 2004, he’s registered just three top-five finishes (fifth in ’05, fourth in ’06 and ’12).

This year Lanigan will have three chances to add Volusia to his list of WoO LMS conquests; after the dirt Late Model portion of the UNOH DIRTcar Nationals Presented by Summit begins with DIRTcar UMP-sanctioned events on Feb. 18-20, the WoO LMS takes center stage for three consecutive nights on Feb. 21-23. The driver known as the ‘Bluegrass Bandit’ is eyeing that World of Outlaws tripleheader.

“I’d like to win every race, but not having won an Outlaw show (at Volusia) makes you want to get one a little more,” said Lanigan. “I know we can do it, because we’ve won UMP shows there before and we like the track. It’s probably one of the better tracks we go to down south – the surface is pretty decent, and it’s usually pretty racy.

“But it’s definitely always one of the toughest weeks of the year. It’s a long week because there’s already a lot of wear-and-tear on your equipment before you even get there, and there’s a lot of good cars there. Everything’s gotta go right to get a win there, and so far we’ve never had one of those nights on an Outlaw night. Hopefully we’ll have one this year.”

“Screven, (BRP) and Volusia should be three good tracks for us to start the year,” said Lanigan, who ended last season’s six-race swing to the three facilities with $42,700 in earnings and a 28-point lead over Richards in the WoO LMS standings. “We run good at all of ’em, so we just need some luck with us.

“I’m really looking forward to that that big show (Super Sunday Showdown) at Ocala. I’m definitely glad to see they’ve put it a $20,000-to-win race on the schedule this year. It should be a real good show for the fans. Ocala definitely can be racy. It’s one of those get-up-on-the-wheel-and-go tracks.”

For more information on the Winter Freeze at Screven Motor Speedway and the Bubba Army Winter Nationals at Bubba Raceway Park, visitwww.screvenmotorsportscomplex.com and www.bubbaracewaypark.com.

Gates will open nightly at 5 p.m. with racing getting the green flag at 7:30 p.m.

For more information on the UNOH DIRTcar Nationals Presented by Summit – including special pricing on advance-sale tickets and details of the ‘Free Pit Pass With Every Ticket’ offer that allows fans to get up-close-and-personal with the race teams every night of the DCN – visit www.DIRTcarNationals.com or call 704-795-7223 or 877-395-8606 (ticket hotline).