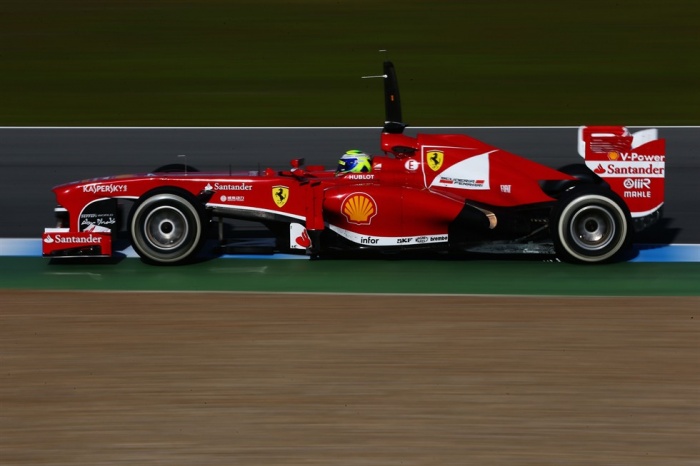 Felipe Massa topped the timesheets on day three of pre-season testing in Spain. The Ferrari driver’s best lap, recorded before lunch, was the quickest that anyone has managed around Jerez this week.

The Brazilian, who will hand the F138 over to new Ferrari test driver Pedro de la Rosa tomorrow, completed 85 laps today to add to the 142 he accumulated over the first two days of running.

Massa spent the first part of the day comparing the various Pirelli tyre compounds and then did long runs in the afternoon.

Mercedes, who were been plagued by mechanical problems on the first two days of the test, were on track nearly all day with Nico Rosberg completing an impressive 148 laps in the F1 W04. His best time was good enough for second place overall.

“I’m very happy with today and I think it was probably a personal record for me to do almost 150 laps,” he said afterwards. “I’ve never been so well prepared physically as I am this season; I feel on top form and it was no problem to complete the programme.

“To drive the distance from Silverstone to Spa in one day with no problems whatsoever is a fantastic achievement from the team. It really made up for the last two days and put a smile on everybody’s face. In terms of driving the car, I have a good feeling, I can push it and feel comfortable – but obviously we still have plenty of work to do to continue improving.”

“It was great to get back in the car, to get rid of the rust and to get back in the groove again,” said Vettel. “The first feeling is good and the car is working well. It’s difficult to judge the speed, but in terms of reliability it looks pretty good.

“For today we accomplished what we set out to achieve – which was to put a lot of laps on the car.”

Also taking to the track for the first time in 2013 was Lotus’s Kimi Raikkonen. After acclimatising himself to the E21 in the morning, the Finn set his fastest lap of the day in the afternoon before a clutch problem halted progress.

“It was good to get behind the wheel of a Formula One car again,” said Raikkonen. “The E21 feels quite good so far, even if the balance isn’t quite to my liking yet. That didn’t stop us going through the programme we wanted to do which had a lot of aero runs in it.

“We know the car can go faster, we were just running through what we needed to achieve. It’s a shame that we had a clutch issue at the end of the day, but that’s why we come testing so we can find these problems and fix them.”

Marginally slower than Raikkonen was Toro Rosso’s Jean-Eric Vergne, who took over the STR8 from Daniel Ricciardo today.

The sixth-fastest time went to Force India test driver James Rossiter who is familiarising himself with the VJM06 to help with his simulator duties for the team. The Briton provided one of the most eventful moments of the day in the morning when he misjudged his braking point coming into the pits and accidentally hit one of his mechanics. Thankfully the mechanic was only bruised in the incident.

“It has been four and a half years since I last drove a Formula One car, but with the simulator experience I’ve built up recently it didn’t take too long to get back up to speed,” explained Rossiter.

“The programme today has been very useful for getting a feel for the car as a reference for the simulator. The cars have changed quite a lot and it was the first time I’ve used KERS. It’s important to know how the tyres behave and we’ve worked hard to try and understand them this week. That will help make the simulator model more representative as a way of exploiting the car’s potential.”

Paul di Resta took over for Force India in the afternoon, but his running was cut short by an exhaust failure after just seven laps.

Jenson Button – quickest on the first day for McLaren – was seventh quickest, whilst Esteban Gutierrez – making his debut for Sauber – was eighth.

“I had the chance to get to know the car and the tyres that are behaving quite differently,” said Gutierrez. “Because of this it was important to understand the warm-up characteristics and the behaviour on long runs with high fuel loads.

“It was very interesting to feel the progress – something that gets me up to speed. I’m positive about the new car and I immediately felt comfortable in it.“

Max Chilton recorded Marussia’s quickest time of the week late in the afternoon for ninth, with Valtteri Bottas (in last year’s Williams FW34) and Charles Pic (in Caterham’s CT03) recording the tenth- and 11th-fastest laps of the day on their maiden outings of 2013.

Testing concludes at Jerez on Friday.