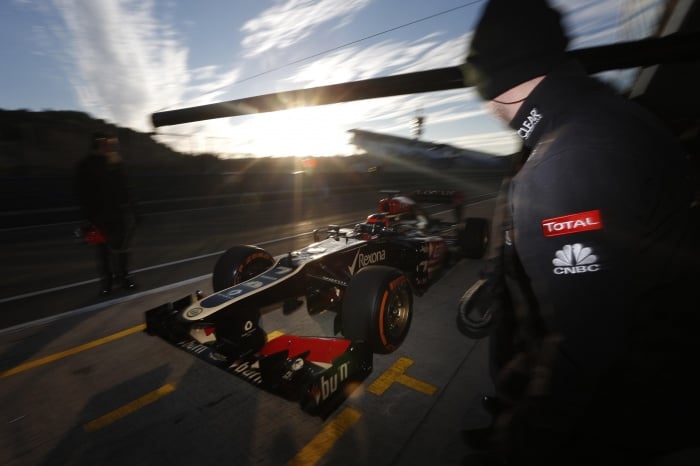 Kimi Raikkonen set the pace on the final day of the opening pre-season test of 2013 in Spain. The Finn’s best lap came on a short run on soft tyres in the afternoon and ensured that Lotus leave Jerez having posted the fastest time on two of the four days of running. Romain Grosjean was quickest on Wednesday in the team’s promising new E21 machine.

“We continued our work from yesterday and made some good progress,” commented Raikkonen. “We’re at the top of the timing monitors, but that means nothing in testing. Our focus has been testing parts on the car, but I’ve been able to get the set-up more to my liking. For sure there’s more work to be done in this area, but that’s what we’re here for. The car feels strong and we seem to have a good idea of where we’re going with improvements.”

The second-quickest time – on a day when running was extended by 30 minutes because of a stoppage for track repairs – was set in the morning by Jules Bianchi for Force India. The Frenchman, who is believed to be under consideration for the vacant second seat at the team, was pleased with his first run in the VJM06.

“My first experience of the new car was very positive and it’s clearly an improvement over last year’s car,” he said. “I spent most of the time on the medium tyres, but I got a chance to run the softs as well and they offered a lot of grip so I enjoyed that.

“It was also nice to do some long runs, so I’ve felt the car on heavy fuel, which is good for my experience. I’m pleased the team asked me to help out this week and I’m happy with how things went today.”

Reigning world champion Sebastian Vettel posted the third-quickest time, although the Red Bull driver spent much of the day putting the RB9 through long runs on medium and hard-compound tyres.

The two busiest drivers on day four were Sauber’s Esteban Gutierrez – who did 142 laps and registered the fourth-quickest time – and Mercedes’ Lewis Hamilton who circulated 145 times. After completing only 15 laps in his first run in the car on Wednesday, Hamilton was far happier after ending the day in sixth.

“Today we managed the kind of mileage that the car is capable of and I think we have a good platform to start working from,” he said. “Now we need to understand the F1 W04 even more: personally, I am learning something with every lap I do and every change I make to the set-up. Overall, I think we are probably at the level we would have hoped to be.

“The team has done a great job to add downforce to the car over the winter and they now need Nico (Rosberg) and me to tell them where we can improve and the direction we need to go. Everybody has been incredibly supportive and I am really building a good bond with the team; they feel energised, ready to go and everybody is working flat out to move us forward.”

Just below Perez on the timesheets was Williams’ Valtteri Bottas and Pedro de la Rosa, the latter marking his first day of testing for Ferrari. The day began badly for the Spaniard as the Scuderia’s F138 came to a smoky halt just three laps into the morning session with a gearbox problem. Ferrari recovered the car quickly and de la Rosa went on to complete 51 valuable laps.

Charles Pic was the third driver to top the 100-lap mark, in Caterham’s new CT03.

“The track was colder this morning than the first three days so it was tricky getting the tyres to work, but we completed all the programs we’d set for the day and we have some very useful information to work on, and some interesting options to look at for the next test,” said the Frenchman.

“One key part of this test was to work on getting the most out of KERS and we’ve definitely made good progress on that. There’s still more to come from that, especially maximising its performance under braking, but I’m really happy with what we’ve worked through and can’t wait to get back in the car in Barcelona.”

The second pre-season test of the year begins on February 19 at Barcelona’s Circuit de Catalunya in Spain.