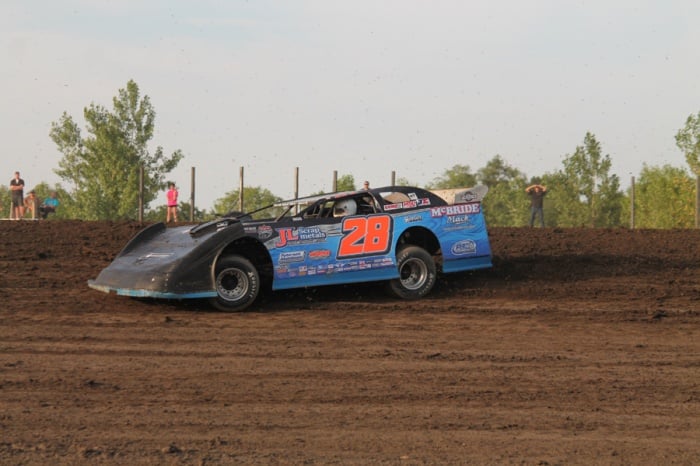 TAMPA, FL (February 11, 2013) – Defending DART Winternationals Champion, Dennis Erb Jr. of Carpentersville, IL kicked off the 2013 Lucas Oil Late Model Dirt Series season with a clean sweep of events on Monday Night. Erb was the Red Buck Fast Qualifier; won his heat race to earn the outside front row starting spot and led every lap to win the main event. He earned $5,000 for the win.

Erb in his J&L Scrap Metals, Kuntz and Company powered Bloomquist Race Cars #28 earned his third career win at the “Clay by the Bay” by holding off 2-time series champion, Scott Bloomquist of Mooresburg, TN at the finish line. Bloomquist made a last-lap dash and came up one car-length short of victory. Don O’Neal of Martinsville, IN held off another veteran, Donnie Moran of Dresden, OH to claim third. Bobby Pierce of Oakwood, IL rounded out the top five in his best-ever East Bay finish.

“What can I say; the car was terrific all night! I didn’t realize I had qualified that fast, they said we nearly broke the track record. To lead the laps we did and to beat Scott, takes a great effort,” said Erb, who also thanked his Crew Chief Heather Lyne for her help. “She does a fabulous job, I couldn’t do this without her, and she knows exactly what to do to the car to make it faster! Tonight was just one of those nights where everything fell into place and was to our benefit.”

“We had a good car all night,” said Bloomquist, who entered the event with five career wins at the 1/3rd mile oval. “The track was exceptional tonight, you could run anywhere on it, congrats to him (Erb), he drove a good race, it was one of our cars and we are happy about that.”

O’Neal barely held off the 12th starting Moran to finish third in the Optima Batteries, MasterSbilt House Car. “Erb and Scott were real good tonight, we just have to go back and make some more adjustments for tomorrow night and come back even stronger, he (Moran) gave me a good-run there at the end, and I don’t know where he came from.”

Pierce mixed it up with the veterans in only his third-career trip to East Bay. The 16-year-old ran as high as third before settling for a fifth-place finish.

The Lucas Oil Late Model Dirt series will be back every night this week with more high-flying action from the 37th Annual DART Winternationals at East Bay Raceway Park in Tampa, FL. For more information on the event or EBRP, log onto www.eastbayracewaypark.com.