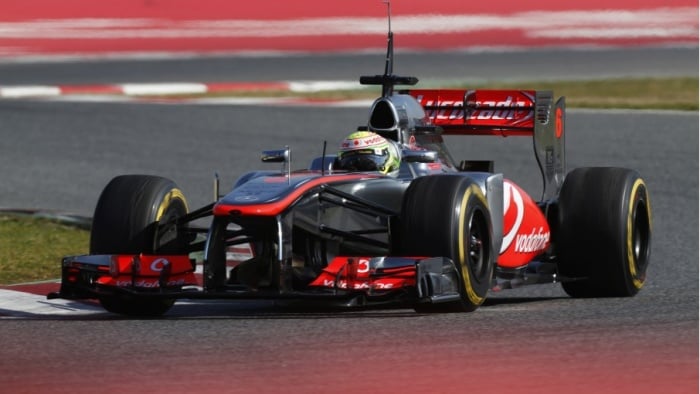 McLaren’s Sergio Perez set the pace on day two of this week’s pre-season test at the Circuit de Catalunya in Barcelona on Wednesday.

Perez completed 97 laps of the Spanish circuit in the new MP4-28 as the Mexican driver worked to improve his understanding of both his new car and his new team.

In the morning he completed shorter runs with the aim of gaining the engineers a better understanding of the car’s track-to-tunnel aero correlation and its reaction to a series of mechanical set-up changes.

Then, in the afternoon, he completed a number of longer runs in order to gain a better understanding of the methods and systems that will be used by the race team during a race weekend, including cockpit switch adjustments and understanding radio messaging. His best run was set during this session using Pirelli’s soft-compound tyres.

Sebastian Vettel clocked the second-fastest time for Red Bull. The reigning world champion had the fastest time when the team’s stopped for lunch, but the afternoon was less successful as a race simulation run was cut short when his RB9 came to a halt on track with a loose wheel after a pit stop, bringing out the red flags.

“Obviously we wanted to run a bit longer – and that didn’t work,” said Vettel. “But better have issues here – after all this is a test – than later on in the season. We’d done several pit stops and obviously at the last one the wheel wasn’t fixed properly. That was the reason I couldn’t go out again. But again, nothing really to worry about.”

The third-quickest time of the day was set by Kimi Raikkonen on medium-compound tyres in the Lotus E21, although his running was significantly curtailed by a frustrating gearbox change.

“If yesterday wasn’t an ideal day then today was more of the same,” said Raikkonen. “Fortunately, once we were able to get a lap in we could see that the car has good pace. We test to find any problems so in that respect we’re doing a good job, but it’s frustrating.

“It’s no secret that we want to get more laps on the board and that’s the target for the rest of this test and the final sessions next week.”

Lewis Hamilton set the fourth-fastest time as Mercedes focused on comparisons between exhaust configurations on their F1 W04 machine in the morning and longer runs in the afternoon. The British racer completed 121 laps – the most of anyone and nearly twice the length of the Spanish Grand Prix which will be held in Barcelona on May 12.

“We had a good day today and it was nice to get so many laps in,” said Hamilton. “We’re making continual steps forward in terms of our understanding of the set-up and the tyres. The hard compound work in particular was pretty good today, although all of tyres are showing degradation so looking after them isn’t easy.”

Fernando Alonso set the fifth-quickest time in his second outing in Ferrari’s F138. He added 76 laps to the 110 he completed on Tuesday, although an exhaust problem prevented him from completing the Scuderia’s planned test programme.

Williams had another productive day testing their new car, the FW35. Valtteri Bottas completed 98 laps and set the sixth-fastest time on his first outing in the Renault-powered machine.

“Once we completed the aero work this morning I was able to complete my first proper run to feel the FW35 and the improvements we have made,” said Bottas. “Straight out of the box I knew we had made a step forward from last year, and I am looking forward to working to develop the car even further.”

“My second day in the car in Barcelona was a positive step from yesterday but we still have work to do to get the car’s performance to where we want it to be by Melbourne,” said Pic.

“After losing some time on day one it was important to get as many kilometres done as possible and completing 102 laps gives us a lot of data to work through and will help us progress over the next two days of this test, and to prepare for next week.”

Testing continues at Barcelona on Thursday.