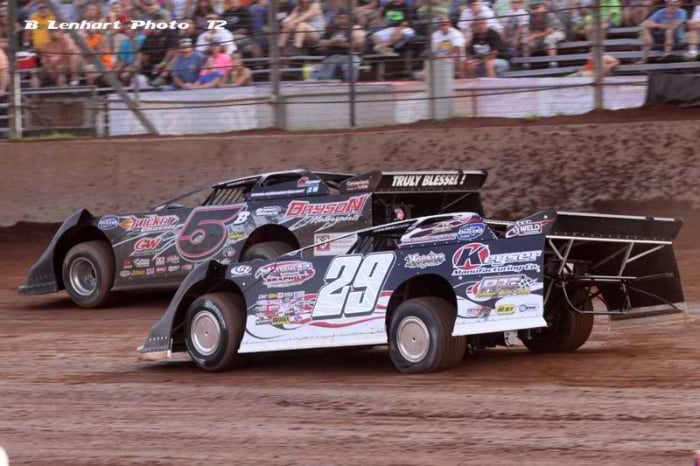 The defending WoO LMS champion outdueled Tim McCreadie of Watertown, N.Y., to assume command for good on lap 17, but he was challenged repeatedly during the race’s second half by both McCreadie and Josh Richards of Shinnston, W.Va., before pulling away following a final caution flag on lap 41.

Richards never seriously threatened Lanigan over the last nine circuits, crossing the finish line 0.990 of a second behind the victor. The runner-up finish sent Richards home with the WoO LMS points lead after a season-opening burst of eight events and he also was named the Late Model champion of the 2013 UNOH DIRTcar Nationals by Summit, earning himself a unique bronze gator-shaped trophy.

McCreadie, who paced laps 3-11 and nosed ahead of Lanigan to lead lap 16, settled for a third-place finish. Shane Clanton of Fayetteville, Ga., placed fourth – his sixth top-five finish of the young WoO LMS campaign – and Clanton’s Kennedy Motorsports teammate Tim Fuller of Watertown, N.Y., scored a season-high and career-best Volusia finish of fifth.

Rick Eckert of York, Pa., placed sixth after starting 14th and Bub McCool of Vicksburg, Miss., was seventh from the 16th starting spot, completing a sweep of the top seven finishing positions by WoO LMS regulars.

Lanigan, 42, earned $10,150 for his series-leading third win of the season. It was his tour-record 44th career win but first at the Volusia half-mile, where he had previously won twice in DIRTcar UMP-sanctioned Late Model action during the UNOH DIRTcar Nationals by Summit but never in 18 previous WoO LMS starts dating back to 2004.

“It’s awesome to finally get a World of Outlaws win here at Volusia,” said Lanigan, whose last visit to Victory Lane during the UNOH DIRTcar Nationals by Summit came in 2010. “We’ve been trying to win one here for a long time.”

The checkered flag certainly didn’t come easy. For starters, Lanigan and his crew had to put in overtime just to prepare the Rocket machine he drove to victory after it was damaged heavily in an accident during Tuesday night’s DIRTcar UMP-sanctioned feature.

“I gotta thank my crew, Jason (Jameson) and Adam (Logan),” said Lanigan. “They worked hard all week to put this thing back together. We put it on the jig (on Friday) to straighten it out and it was awesome tonight.”

In the A-Main, Lanigan had to repel McCreadie and Richards in a face-off of three former WoO LMS champions. After gaining control of the top spot from McCreadie on lap 17 and then turning back several challenges from T-Mac between caution flags on laps 19 (for the slow car driven by Scott Bloomquist of Mooresburg, Tenn.) and 25 (for Clint Smith of Senoia, Ga.), Lanigan found Richards hot on his rear bumper beginning on lap 28.

Richards, 24, drew his Valvoline-sponsored Rocket Chassis house car close to Lanigan during an extended green-flag stint following a lap-27 caution for Bobby Pierce of Oakwood, Ill. But just as the returning WoO LMS regular appeared primed to bid for the lead the race’s fourth and final caution flag flew on lap 41 for fifth-place Stormy Scott of Las Cruces, N.M., whose first-ever WoO LMS A-Main start came to an end with mechanical trouble after he led laps 1-2 off the pole and ran in the top five throughout the distance.

The late caution was a godsend for Lanigan, who cooled his tires and took off on the restart.

“I knew we were softer (with tire-compound choice) than those guys,” said Lanigan, referring to Richards and McCreadie. “We were on (Hoosier LM) 20s and they were on 30s, so I knew I had to save my stuff as much as I could. When I seen that caution with nine to go I just said, ‘Oh yeah, here’s my baby here.” That’s what I needed to help me hold on.”

“For the last five laps I found a pretty good line right through the middle there (in turns three and four) and my car just worked awesome.”

Richards, meanwhile, knew his chances were likely dive-bombed for the late caution flag.

“I knew Darrell was softer on the right-rear tire so I didn’t really want to see that caution,” said Richards, who started 12th after missing the A-Main redraw because Lanigan passed him on the final lap of the fourth heat to finish second. “I think we might have had a chance to get by him if the race went green all the way to finish, but we’ll take a second. It’s been a great week and it’s an honor to win the (UNOH DIRTcar Nationals by Summit) championship.”

Finishing in positions 8-10 were Brady Smith of Solon Springs, Wis., who also started eighth; Scott James of Bright, Ind., who advanced from the 25th starting spot after using a WoO LMS points provisional to gain entry to the A-Main; and Dale McDowell of Chickamauga, Ga., who was scheduled to start 19th but was penalized to the rear of the field for the green flag because his crew changed a tire on his car after it was presented in the staging area.

Forty-six cars were signed in for the evening’s action.

For the third consecutive night Ohlins Shocks Time Trials were split into ‘A’ and ‘B’ groups, with the first half competing for starting positions in heats one and two and the second half racing against the clock to align heats three and four. Kenny Pettyjohn of Millsboro, Del., earned his first-ever WoO LMS fast-time honor, registering the fastest overall lap of the evening at 15.790 seconds.

Heat winners were Fuller, Billy Moyer of Batesville, Ark., Scott and Clanton. The B-Mains were captured by Pat Doar of New Richmond, Wis., and Dennis Erb Jr. of Carpentersville, Ill.

The WoO LMS is idle until embarking on a three-race Southern weekend March 22-24. The tour will visit I-30 Speedway in Little Rock, Ark., on Fri., March 22; Whynot Motorsports Park in Meridian, Miss., on Sat., March 23; and Duck River Raceway Park in Wheel, Tenn., on Sun., March 24.