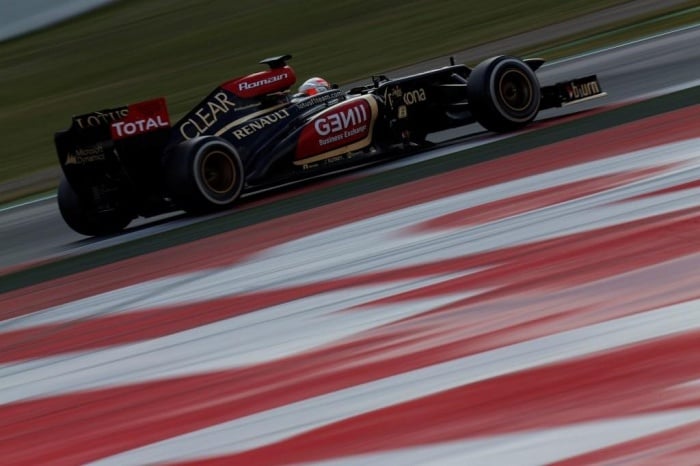 Romain Grosjean clocked the fastest time on day two of the final pre-season test at the Circuit de Catalunya in Barcelona, Spain on Friday.

The Lotus driver, who recorded his best lap on soft tyres in the afternoon session, became the first man to top the timesheets more than once this year, having previously set the quickest time on day two of the first 2013 test at Jerez.

After heavy rain on Thursday night, the drivers had to contend with damp track conditions as the morning session began. Jenson Button was fastest at the lunchtime break, but Grosjean – who’d earlier brought out the red flags when his E21 machine stopped on track – bettered the McLaren driver’s time with just under an hour and a half of running remaining.

“Even though the weather was far from ideal it was a pretty good day for us and it’s certainly a better feeling to end the session with the fastest time on the board rather than the slowest!” said Grosjean.

“We had strong reliability again today and the E21 feels good in all conditions, which is very promising for the season ahead. Of course, I wish I could have more time in the car before the season starts, but if we’re in the same position on the monitors when we get to Australia I’ll be very happy indeed.”

Button, who completed 72 laps in the MP4-28, ended the day in second, having set his best time on medium-compound tyres. McLaren concentrated on aero mapping in the morning before attempting some longer runs to evaluate upgrades in the afternoon. They ended the day with a series of live pit-stop simulations.

Pastor Maldonado ensured Williams had another productive day of running with their new FW35 machine. The Venezuelan was third fastest, having set his best lap on Pirelli’s soft tyres.

Reigning world champions Sebastian Vettel and Red Bull set the fourth-quickest time of the day. Sauber’s Nico Hulkenberg was fifth, with the recently-appointed Adrian Sutil showing strong form on his way to sixth for Force India.

“We knew day two of this test would be another stop/start day with the weather forecast being bad for at least half the day and the forecast wasn’t wrong,” said Van der Garde. “Despite that we went out early for an installation lap and then ran through more setup work on the wet and intermediate tyres in the morning session.

“The weather cleared up a bit in the afternoon but we had a technical issue that cut into our runplan so we switched from the full race simulation we were going to run to more setup work and tyre evaluation.

“Unfortunately the rain came back again with half an hour to go, which again meant we had to change the plan but the forecast for the last couple of days is better so hopefully we can get back to the original run plan and finish the tests as we’d planned.”

The bottom two drivers on the timesheet were Mercedes’ Nico Rosberg and Ferrari’s Fernando Alonso, who were both concentrating on longer runs.

“It was great to run in the wet today which I have not done so far during our pre-season testing programme,” said Rosberg who completed the most laps of any driver – 120. “The car felt good in those conditions and it’s important to have had this experience as there is always the chance of rain in Melbourne.

“This afternoon, we did some race simulation work which was very productive. I am happy with my mileage today as every single lap is important for the learning process, and so overall it was a positive day for me here in Montmelo.”

Testing continues at the Circuit de Catalunya on Saturday.