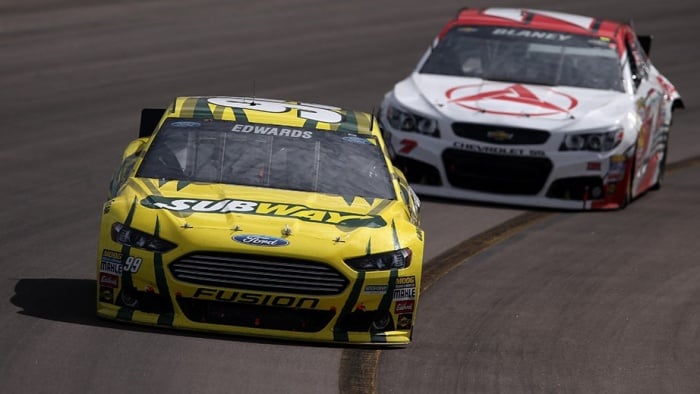 Edwards led 122 of 316 laps to end a 70-race winless skid dating back to the March 6, 2011 event at Las Vegas Motor Speedway. His second triumph on the 1-mile track in the desert was his 20th in NASCAR’s top series.

Johnson was bidding to be the first driver to win the first two races of the season since Matt Kenseth accomplished the feat in 2009. After the race, Johnson voiced some displeasure over the jumps Edwards took on the final two restarts, saying the winner slowed below pace-car speed before hitting the gas on the green flag. He still left Phoenix with an eight-point lead in the standings over Keselowski and Earnhardt, his Hendrick Motorsports teammate.

Pole-starter Mark Martin led the first 49 laps before surrendering the lead in a round of yellow-flag pit stops. He lost a lap just 12 laps later during an unscheduled pit stop to change right-side tires, but regained his lead-lap standing as the free-pass beneficiary when Dave Blaney crashed on Lap 64.

Martin returned to the lead by staying out after getting off cycle in pit stops. He wound up 21st.

Kyle Busch, who dropped to the rear of the field at the start because of an unauthorized pre-race engine change, lost a lap after a solo spin and brush of the wall in the 48th lap. After bringing out the second caution period of the race, Busch recovered to finish 23rd as the last driver on the lead lap.

Danica Patrick, who made history in her eighth-place performance last weekend in the Daytona 500, was uninjured after smacking the wall hard when a right-front tire exploded in the 186th lap. Her car collected the No. 34 of David Ragan, ending her day with damage on every side of her Stewart-Haas Racing Chevrolet. She finished 39th.

“It was a little unexpected,” Patrick said after she was evaluated and released from the infield care center. “I took a hard hit to the right, and then on the left. I’m fine. The cars and the tracks are so safe. As a driver that’s a nice feeling. It doesn’t change the fact that we aren’t going to get any points really coming out of today, and it would have been nice.”