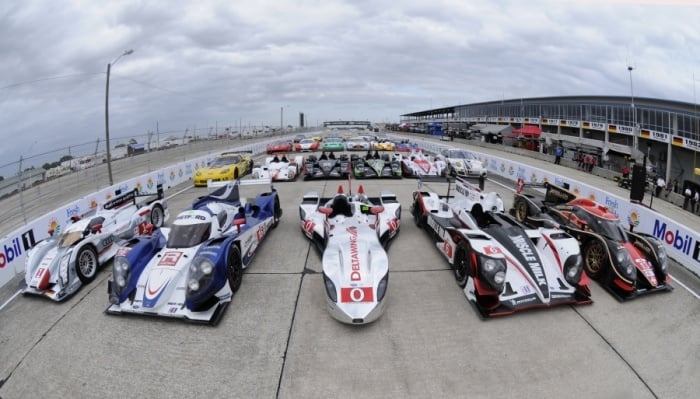 SEBRING, Fla. – With uniqueness and modernity at the forefront, the new United SportsCar Racing platform was revealed (#TheReveal) today at Sebring International Raceway, resulting from the merger of GRAND-AM Road Racing and the American Le Mans Series presented by Tequila Patrón.

United SportsCar Racing will debut in 2014 with the season-opening Rolex 24 At Daytona.

“The new name says it all,” said GRAND-AM President and CEO Ed Bennett. “In only six months since we announced the merger, GRAND-AM and the ALMS have taken huge strides to become one organization that will redefine sports car racing in North America. United SportsCar Racing reflects the fundamental spirit of how we are working together toward a common goal.”

Today’s announcement culminates a four-month project that involved New York-based SME Branding, one of the nation’s leading agencies with a client list that includes the NFL, NHL, UFC, the New York Yankees, Kentucky Derby, Madison Square Garden and NASCAR. SME conducted stakeholder research as well as fan input to develop the series’ name, logo and brand identity. The selection of United SportsCar Racing was derived from a submission by Cocoa, Fla.’s Louis Satterlee in GRAND-AM’s “Name The Future” fan contest.

The logo, with its race helmet-like imagery, was developed to be an icon with a modern feel, representing a part of motorsports that is immediately recognizable.

A historic backdrop, indeed, for discussion of the future of North American sports car racing.

“When it came to the branding of our newly merged entities, we felt we had one chance to get it right – and now we believe we have done just that,” Atherton said.

“We began the branding process by listening to everyone – manufacturers, corporate partners, drivers, teams, tracks – and of course, the fans. The input was invaluable and helped lead us to today’s milestone announcement.”

O’Hara said the goal of the new name and logo is “to be modern, aspirational, authentic, unique and obviously, exciting. We want fans and the sports car industry to feel like they ‘own’ this new brand.

“We also want them to feel like that ownership is a long-term proposition. This new brand is made to order for the future, without a doubt.”

United SportsCar Racing also launched today a microsite, www.unitedsportscar.com, where fans can enter to win two tickets to the 2014 Rolex 24 At Daytona as well as official merchandise.