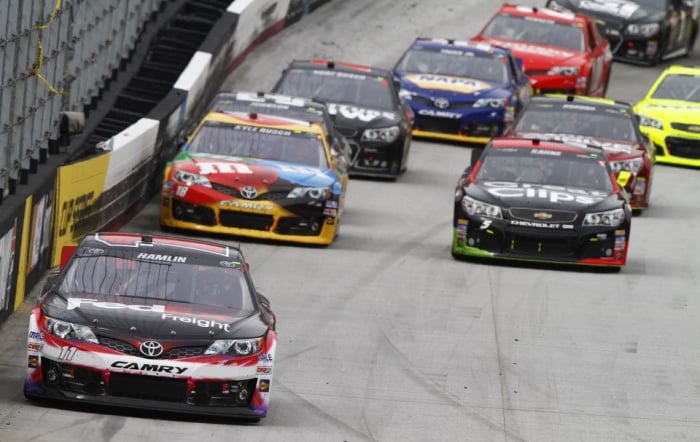 Take a look at the full Food City 500 results from Bristol Motor Speedway below.

BRISTOL, Tenn. — After dueling door-to-door with Brad Keselowski, Kasey Kahne got the jump on the final restart and went on to post his first Sprint Cup victory at Bristol Motor Speedway in Sunday’s Food City 500.

“I don’t think I had anything for Kasey. I’m not sure anyone did,” said Kyle Busch, who finished second after dominating much of the weekend. Keselowski, the defending race champ, finished third.

Kahne, who had finished no better than fifth in any of his previous 10 Cup races at Bristol, assumed the lead after his Hendrick Motorsports teammate Jimmie Johnson blew a tire, bringing out the race’s 10th caution of the race.

Busch, who had won the pole in track record time on Friday, posted the fastest laps in both of Saturday’s practice sessions, then won Saturday’s Nationwide Series event, led the first 55 laps before pit road speeding violation under caution shuffled him back to 32nd. He was undaunted in his recovery, battling his way back to 16th in the next 40 laps. He was second to teammate Denny Hamlin on Lap 155 after the race’s fourth caution.

Hamlin led 117 of the first 189 laps before surrendering the lead in the pits to teammate Matt Kenseth.

Joey Logano, who started 10th, had been making steady progress and was challenging leader Jeff Gordon on Lap 348 when Hamlin, his former JGR teammate sent him spinning into the outer wall. That led to a post-race exchange between Logano and Hamlin.

Asked if he and Hamlin had a problem, Logano replied: “If we didn’t we do now.”

A crash on Lap 391 of 500 took out race leaders Gordon and Kenseth.

Gordon climbed the track with a right-front tire going down and Kenseth had nowhere to go, slamming into the rear of Gordon, totally demolishing the front end of his JGR Toyota.

“Not a lot either one of us could do about that,” Kenseth said.

Keselowski’s third-place finish vaulted him to the lead in the Sprint cup point standings, nine points ahead of Dale Earnhardt Jr., who finished sixth after qualifying 32nd. Kurt Busch finished fourth (his best finish for Furniture Row Racing) and Clint Bowyer was fifth.

The Doobie Brothers to Sing in 2016 Food City 500 Concert

Operating a dirt track in a city – Well populated city

City of Nashville turns down bid from Bristol Motor Speedway