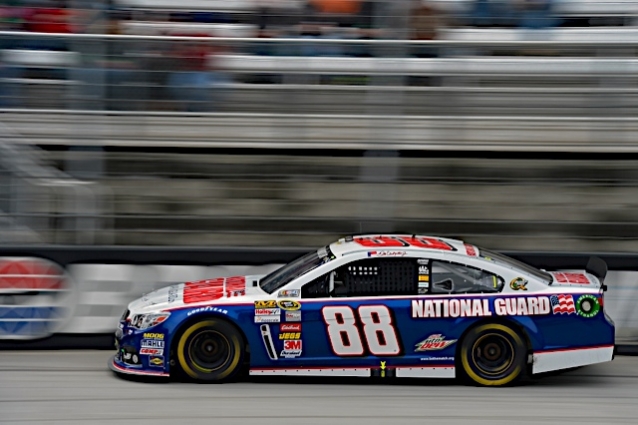 BRISTOL, Tenn. – Kasey Kahne earned his first career victory at Bristol Motor Speedway and the 15th of his NASCAR Sprint Cup career on Sunday at the .533-mile oval.

Hendrick Motorsports now has 10 career victories at Bristol, making the track its 10th with double-digit wins.

The driver of the No. 5 Great Clips Chevrolet SS lined up on the front row after a caution period on Lap 455 and took the lead on the Lap 460 restart. He held off hard-charging competitors and successfully maneuvered lapped traffic to lead 109 total laps and win his first Bristol trophy.

Dale Earnhardt Jr. joined Kahne in the top 10 with a sixth-place finish, his fourth straight of the season. Jimmie Johnson and Jeff Gordon sustained late-race incidents and finished 22nd and 34th, respectively.

Here is the breakdown by team:

Kasey Kahne, No. 5 Great Clips Chevrolet SS
Race finish: First
Standings: Seventh.
Recap: Kasey Kahne opened Sunday’s race from the outside pole position, his second of the 2013 Cup season and third of his career at Bristol Motor Speedway. The driver of the No. 5 Great Clips Chevrolet SS struggled to find the right groove, but remained within the top five as the race unfolded. After a two-tire pit stop, Kahne returned to the front row for a Lap 63 restart and was leading the race within the following circuit. Kahne worked with crew chief Kenny Francis, and the No. 5 team made the necessary adjustments as his Great Clips Chevy occasionally developed experienced tight-handling conditions throughout the race. Happy with the handling of his No. 5 Chevy, Kahne lined up fourth for the Lap 353 restart and was running second within two circuits. Kahne chased teammate Jeff Gordon as the laps ticked down at Bristol’s .533-mile oval. Roughly 35 laps later, Gordon blew a right-front tire and made contact with the wall, bringing out the caution flag and sending him behind the wall for repairs. Kahne moved into the leader spot and began battling with front-runner Brad Keselowski during the ensuing green flag period. Lapped traffic affected the leaders’ positions, and Kahne alternated leading with Keselowski until the caution flag was waved again – this time for teammate Jimmie Johnson, who blew a tire on Lap 455. Lining up from the inside of the front row, Kahne sped to the lead as Keselowski spun his tires. Kahne attempted to stretch out his lead, but had to battle a hard-charging Kyle Busch and recovering Keselowski. Kahne held onto the top spot through a caution-free finale and won his first Cup race at Bristol.
Jeff Gordon, No. 24 Drive to End Hunger Chevrolet SS
Race finish: 34th.
Standings: 21st.
Race recap: Jeff Gordon rolled off the grid 11th on Sunday at Bristol Motor Speedway and remained inside the top 15 as the race unfolded. He utilized pit strategy with crew chief Alan Gustafson and moved into third on Lap 145. Running lap times similar to the leaders, Gordon put himself in position to take the lead. He finally secured the top spot after a swift stop by his No. 24 pit crew. During the caution period on Lap 321, Gordon hit pit road for left-side tires and fuel. The left-side tires seemed to help the handling of the No. 24 Chevy, and Gordon was able to speed out to the lead on Lap 324 restart next to teammate Kasey Kahne. Gordon stretched out an .8-second lead, but when he started to navigate lapped traffic and attempted a move to the bottom, he blew the right-front tire and that momentum carried his No. 24 Chevy into the wall. Gordon also sustained contact from behind from a competitor. The collision sent Gordon and his No. 24 Chevy behind the wall, where the No. 24 team attempted to make repairs to send him back onto the track for much-needed points. He was scored with the 34th-place finish.


Jimmie Johnson, No. 48 Kobalt Tools Chevrolet SS
Race finish: 22nd.
Standings: Third
Recap: Jimmie Johnson started 13th on Sunday at Bristol Motor Speedway and moved into 11th by Lap 40. The driver of the No. 48 Kobalt Tools Chevrolet SS continued to work his way through traffic and by Lap 122 was running sixth contending with a tight-handling condition exiting the corner and in the center. Crew chief Chad Knaus directed the No. 48 team to address the handling condition, and Johnson moved into fourth on Lap 147. He continued to search for the best line and gambled with tire strategy as the race unfolded, taking two tires instead of four on various pit stops. With the car operating where he liked it, Johnson continued to run inside the top 10. He lined up sixth for the Lap 258 restart, but was held up as the inside line stalled. Knaus coached Johnson to find his rhythm, and the driver of the No. 48 Chevy was running fourth behind teammate Jeff Gordon (first) and Kasey Kahne (third) when the caution flag was waved on Lap 390 because Gordon blew a tire. “That was close,” Spotter Earl Barban told Johnson, who pitted for left-side tires and lined up sixth for the Lap 405 restart. Misfortune struck on Lap 455, when Johnson blew a tire and made contact with the wall. Nursing the No. 48 Chevy was a priority after the collision, and Johnson crossed the finish line 22nd.

Dale Earnhardt Jr., No. 88 National Guard Chevrolet SS
Race finish: Sixth.
Standings: Second.
Recap: Dale Earnhardt Jr. lined up 32nd for Sunday’s race at Bristol Motor Speedway and worked his way into 11th by Lap 70. He cracked the top 10 on Lap 136 and hovered inside the top 15 as crew chief Steve Letarte addressed various handling conditions. Earnhardt and Letarte opted to gamble during the caution period on Lap 351 and hit pit road for four tires, fuel and adjustments. The stop shuffled Earnhardt’s Chevy back into the field, but Letarte was banking on historically promising late-race cautions that would give Earnhardt the advantage in the closing stages of the 500-lap event.  History in fact repeated itself, although the next caution flag was waved for teammate Jeff Gordon After the Lap 455 caution flag, Earnhardt returned to pit road for four tires, fuel and a wedge adjustment. The fuel would ensure Earnhardt could reach the finish line. Earnhardt restarted 17th on Lap 402 and climbed his way into the top 10 to finish the 500-lap event sixth. Earnhardt now has four straight top-10 results to start the 2013 Cup season; his best career start in the Cup series.