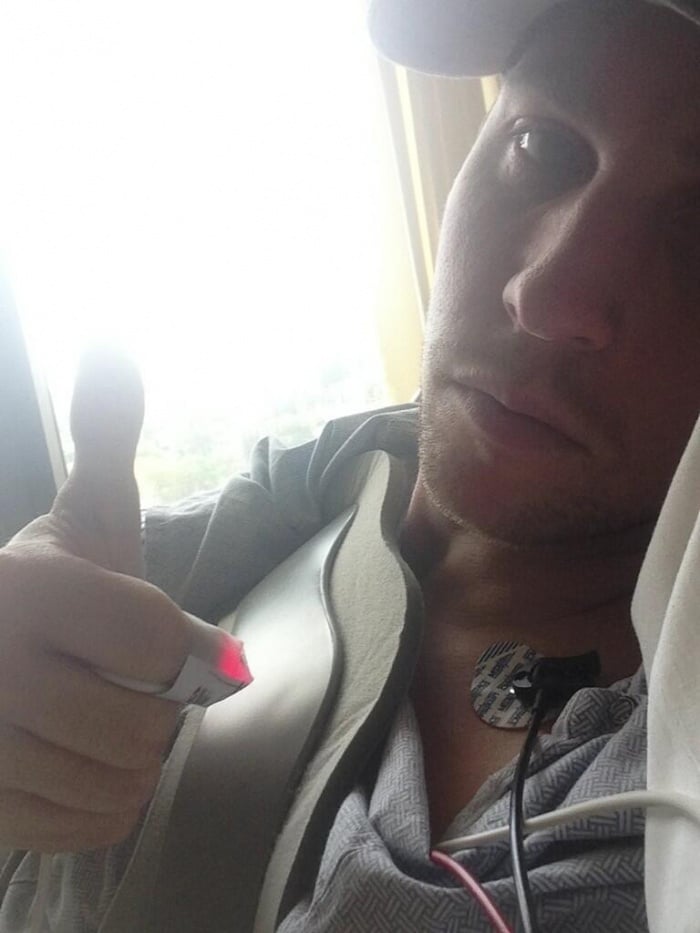 Here’s a Denny Hamlin update after the crash at Auto Club Speedway with Joey Logano. As Denny Hamlin recovered in the hospital from Sunday’s horrific crash in the Auto Club 400, he received an outpouring of support from the NASCAR community.

But one person was noticeably absent from the roll call of those checking in on the driver, the one who was also in the wreck –Joey Logano.

Asked specifically if Logano had tried to call him, Hamlin said, “No.”

“I’ve heard from pretty much all my peers – which has been humbling to say the least. It makes me really happy and keeps your spirits up when you hear from all your peers and everything,” he added. “That part of it has been very encouraging.”

Hamlin walked gingerly out of the California hospital Monday night, more than 29 hours after a crash during the NASCAR Sprint Cup race with Logano at nearby Auto Club Speedway that left him with a compressed fracture in his lower back.

The Joe Gibbs Racing driver was ready to fly home to North Carolina, saying that he was feeling “as good as I can be at the moment — definitely better than I was yesterday for sure.”

Hamlin will meet with a specialist later this week, and cannot even begin to consider when he will return to racing yet, but Monday night he was thinking about getting home.

Still, he was visibly hurting from his injury, admitting that this injury and the pain associated with it was something new to him.

“I never felt this before,” he said after being released from Loma Linda University Medical Center, which is about 15 miles east of the track. “Really, my first reaction is I felt something pop in my back and that’s why I was really trying to get out of the car as soon as I could because the position I was in . . . I couldn’t breathe at all. Still having a hard time breathing. When I felt it pop, I couldn’t move at all and I knew I had to get flat to my back to be able to breathe again — so that’s why I rushed out and then just lay flat on the ground to try to start breathing at that point.”

Hamlin’s accident started when he was racing Logano for the lead on the final lap on Sunday. The two made contact and Hamlin’s car slammed into the wall.

The driver initially climbed from his car then collapsed onto the track. He was airlifted to the local hospital and spent the night there.

After previously having issues with a bulging disc in his back, Hamlin knew right away that something was wrong.

“I knew it wasn’t good because I’d been through so much back stuff before that I know when something is really, really wrong,” he said. “And that was a moment that took two seconds and I knew I was in big trouble.”

Hamlin was holding his ribs as he talked, explaining it was because of the difficulty he was having breathing.

He explained that he needs to keep his body 100 percent straight, with no bending or anything like that, to help.

Yet he still maintained a sense of humor.

“I run out of breath and I’m just on medication a lot,” he said with a laugh.

Hamlin’s next step is to meet with Dr. Jerry Petty of the Carolina Neurosurgery and Spine Associates. He said that he thinks the preliminary meeting with Dr. Petty will be on either Wednesday or Thursday.

“We’re kinda leaving the analyzing for him on what to do either surgery-wise or just stick with a brace and let it heal itself,” he said. “Obviously, both of them take a lot of time.”

Hamlin shied from even trying to assess whether or not he might be able to race at Martinsville Speedway on April 7.

The Sprint Cup Series is entering an off week after the opening five-race stretch.

Hamlin said that right now he’s taking things slowly — and will take the time to make sure he heals properly.

“It’s so tough to say,” he said when asked about Martinsville. “I’m discharging (from the hospital) sitting in a chair putting my feet up and my hands up to see what I can do. But with NASCAR’s substance-abuse policy, you’ve got to be clear for a few days with no medication and everything. At this point, that’ll be very tough for me to see where I’m going to be.

“Just from yesterday to today I’m a lot better, but I don’t know how long this process takes. I read up on it a little bit and nothing I read sounds too encouraging on what my next couple of months is going to be like.”

For now, he just needs to focus on his recovery.

He’ll worry about the rest of it when the time comes.

“This one is tough because it’s your core — it’s your whole center piece of your body and it really takes a lot of G’s anyway, so I just don’t know how my body will react to being in the car,” Hamlin said, explaining the way acceleration feels like weight against the body in races. “Obviously we’ve got some big obstacles as far as getting in a car with the bracing that I need because there’s no way at this point I could get in a car with no bracing. I have to be perfectly vertical – I can’t be twisted in any kind of way. Along with that, if we don’t do surgery then we’ve got the fracture and you can’t — I don’t want to make it worse. It’s not worth that.”

This isn’t the first incident for Hamlin and Logano. The two engaged in a minor Twitter exchange after the season-opening race at Daytona International Speedway, then were displeased after the Bristol race on March 17.

In that race, Hamlin made contact with Logano as the two were chasing the leader, contact that sent Logano into the wall. Logano confronted Hamlin briefly as Hamlin sat in his car after the race, then the driver’s Joe Gibbs Racing crew pushed him away. Logano then offered some cutting remarks to media members about Hamlin and again issued a Twitter comment.

And then the two were involved in the incident fighting for the lead on Sunday.

So, does he view the incident as the product of hard racing or as a part of the rivalry between the two?

“I think it’s a little bit of both if I had to characterize it,” he said. “I really went out of my way throughout the day to give the No. 22 (Logano) room in a lot of places. He raced me really hard for really the entire event — and obviously other guys as well. But at the end I think he saw I was going to win and wasn’t going to let that happen.”

Hamlin also addressed the hard hit that he took. A proponent of SAFER barriers at tracks even before his crash, Hamlin hit an area of the track not protected by those walls.

The impact was so hard his car actually left the ground. Hamlin says he expects that area will be covered in the future — a lesson others will take from his crash.

“Yeah – we just find every hole that there is,” he said of crashes where the barriers are not placed. “There’s just no safe place that a SAFER barrier shouldn’t be. I know that there’s protocol between NASCAR and the tracks to distinguish where SAFER barriers should be because they do cost a lot of money and they cost the tracks a lot. But I’m sure when we go back (to Auto Club Speedway) they’ll be (a SAFER barrier) there. It’s unfortunate it takes wrecks here and like what we saw (with Jeff Gordon) at Watkins Glen for them to refigure these tracks into where they need to be safety wise.”

That’s all we have on the current Denny Hamlin update.