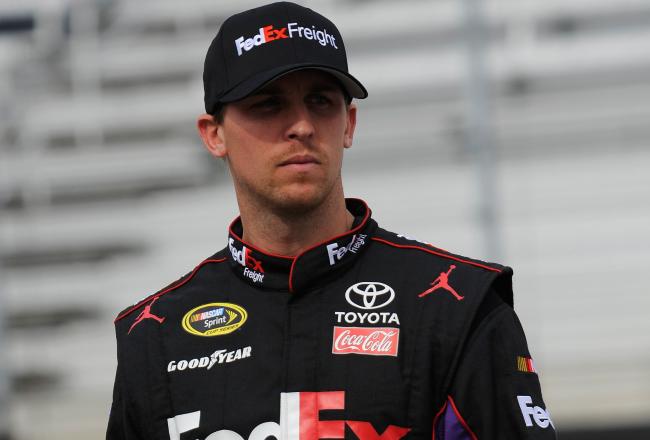 Here’s an update on the Denny Hamlin Injury after his crash last week. The NASCAR driver will miss at least five races but won’t require surgery after being evaluated on Tuesday after his last-lap crash on Sunday at Auto Club Speedway.

In the impact with the inside wall, Hamlin suffered a compression fracture of his L1 vertebra. Joe Gibbs Racing said in a statement Tuesday night that Dr. Jerry Petty determined that Hamlin would need approximately six weeks to heal. Petty will make the decision to clear Hamlin to resume racing activity when he is fully healed.

Because of the Sprint Cup Series off weekend this week, the minimum five races Hamlin will miss are Martinsville, Texas, Kansas, Richmond and Talladega. The race following Talladega is the grueling Southern 500 at Darlington before the non-points Sprint All-Star Race and the Coca-Cola 600.

A replacement driver has not been named for the No. 11 for Martinsville or any other races. The logical in-house option at JGR would be Elliott Sadler, who is running for the team in the Nationwide Series. The team’s other full-time Nationwide Series driver, Brian Vickers, is scheduled to be in the No. 55 at Martinsville.

Before you ask, it’s highly unlikely that Hamlin will be able to make the Chase in 2013. And, as it should be, that’s likely the furthest thing from his or the team’s mind.

I wish I got good news today.. I didn’t.