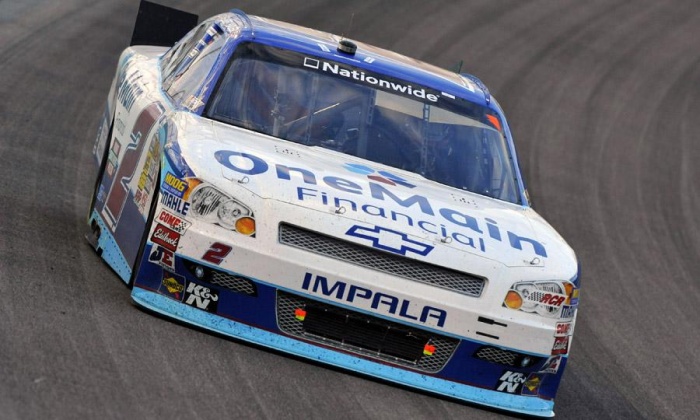 CHARLOTTE, N.C. — A search for the Denny Hamlin Replacement is in action. Joe Gibbs Racing is looking at several driver scenarios, including fellow Toyota driver Mark Martin, to replace Denny Hamlin while he recovers from a back injury.

Multiple sources told ESPN.com that one scenario JGR has considered is Martin driving all five races in the No. 11 car while Hamlin is out. Brian Vickers would pick up Martin’s schedule in the Michael Waltrip Racing No. 55 that includes Texas, Kansas and Richmond. Michael Waltrip is in the 55 at Talladega.

Another scenario, according to sources, is that Vickers would be the Denny Hamlin Replacement for four races after next week at Martinsville, where he is scheduled to drive the No. 55 for Martin. Martin or Elliott Sadler would drive at Martinsville.

Sources said another scenario would have Sadler as the Denny Hamlin Replacement the entire way, although that is the most unlikely option.

Both Vickers and Sadler drive a full-time Nationwide Series schedule for JGR.

Team president J.D. Gibbs would not comment directly on whether Martin is a candidate, but he didn’t deny the possibility.

“We’re talking through everything,” Gibbs said during a Thursday conference call. “There’s several guys. We’re trying to figure out what would be the best fit.”

But Gibbs said for the sake of continuity, he would prefer to go with one driver versus multiple drivers.

“We’re open to either,” he said. “We rather would have someone do all those races. That consistency will be real helpful.”

Martin, 54, is not scheduled to compete in the April 7 Martinsville race in his part-time schedule for MWR, so he would be available. Sources said there have been discussions about letting Vickers pick up Martin’s schedule in the 55 until Hamlin returns, likely at Darlington on May 11.

Waltrip, the owner of MWR, would not discuss scenarios but acknowledged “we would love to help our Toyota partners.”

Gibbs said Hamlin, crew chief Darian Grubb and sponsor FedEx would be involved in the Denny Hamlin Replacement decision. He said the goal is to keep the No. 11 in the best position to win races and remain alive for the owner’s title.

Gibbs also said, based on scenarios he’s seen, Hamlin still has a shot at making the Chase as a wild card and making a run at the driver championship.

“Our goal is each and every week, whether it’s Denny or somebody else in there, we want to encourage FedEx and say this is why this program is valuable for their team,” Gibbs said. “We’re going to do whatever we can to make sure they have good experience week in and week out.”

MWR, according to sources, would like to keep Vickers in the 55 for as much as possible because he is the likely replacement for Martin next season.

Hamlin suffered a compression fracture in his lower back during a last-lap wreck involving former JGR teammate Joey Logano on Sunday at Auto Club Speedway in California.

After an evaluation by Dr. Jerry Petty of Carolina Neurosurgery & Spine Associate, it was determined that Hamlin would need about six weeks to recover. Because the series is off this weekend for Easter, Hamlin would miss five races, beginning with Martinsville.

“If me getting back in a car was based on pain tolerance, then I would be in the car next week,” Hamlin tweeted on Monday. “There’s just more to it that I can’t control.”

Gibbs said Hamlin is “frustrated” and wants to get back in the car as soon as possible. He did not rule out that at some point during the healing process that Hamlin could begin the race to collect points and then give way to a replacement driver.

He said the good news is that the fracture was not major, which might have required surgery and extended Hamlin’s time away from the car.

“Really, we don’t know how long it will take,” Gibbs said. “It’s kind of up to Denny’s body. He’s been through it before [with knee surgery and back issues]. He’s a tough dude. He’s fighting to get back in that car as fast as he can.”