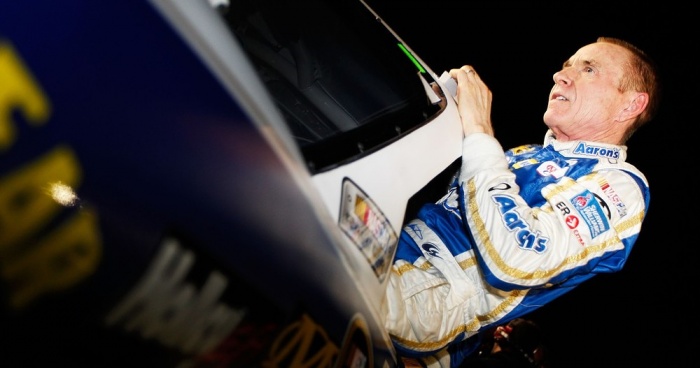 Mark Martin (54) was already committed to drive Michael Waltrip Racing’s No. 55 car for several races during the six weeks Hamlin is expected to miss. But with MWR trying to evaluate Brian Vickers for the ride next year, it made sense to give Vickers some more seat time and move Martin to the No. 11 Toyota.

MWR did not immediately comment on its plans for the No. 55 car now that Mark Martin has temporarily moved to JGR.

Mark Martin will run all races while Hamlin is out except for Talladega, according to a person familiar with the situation.

The person spoke to USA TODAY Sports on condition of anonymity because the person is not authorized to discuss the matter.

Denny Hamlin has a fractured vertebra suffered during Sunday’s race in California and is expected to be out at least six weeks.

J.D. Gibbs, president of Joe Gibbs Racing, told reporters in a conference call earlier Thursday that the team would take its time, and was vague about a plan, saying the team has never had to go through this in 22 years of existence.

“I just hate not being able to be in the car right now, but I really appreciate Mark being able to fill in for me,” Hamlin said in a statement. “Like everyone in NASCAR, I have a tremendous amount of respect for Mark and I know he will keep that FedEx Camry up front until I get back behind the wheel.”

Gibbs said the organization was “really pleased” to know it had someone of Martin’s caliber to drive the car in Hamlin’s absence.

“Obviously we’re not exactly sure how long that is going to take, but Mark’s career speaks for itself and our team knows it will have the opportunity to compete for a win every week,” he said.

In the past six years, Martin has driven for all three of the sport’s current manufacturers – Ford, Chevrolet and Toyota.

Now driving a partial schedule, he hasn’t slowed; he has five pole positions in his last 27 starts.

Martin is a future NASCAR Hall of Famer with 40 career wins. He’s never won the championship, but has finished runner-up in the season standings five times – most recently for Hendrick Motorsports in 2009, when he won five races. He’s also second on the all-time Nationwide Series wins list with 49.

“Hopefully I can keep those guys up front and compete for wins while Denny heals up,” Mark Martin said.

Crew chief Rodney Childers tweeted that due to the No. 55’s “stacked house of drivers,” he knew it was possible for the lineup to be affected in some way.

Still, he said the arrangement would be difficult.

“This will be like me loaning my girlfriend to my best friend for 4 weeks to see if I like this other girl moving fwd..” he tweeted. “It will be very hard.

“But overall, this will show a lot of people that we work a lot closer with JGR than most people think we do.”