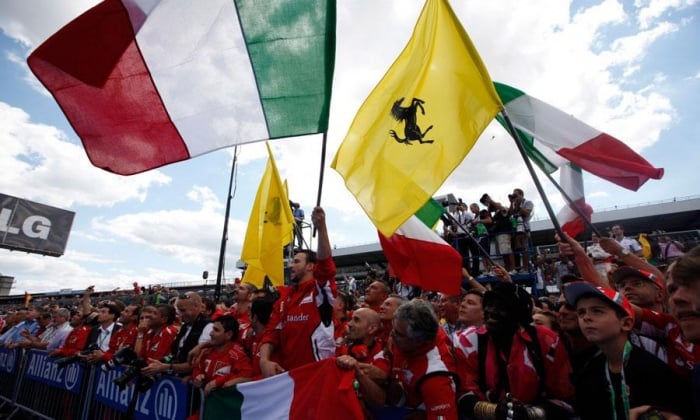 (April 1, 2013) The rumours about Ferrari Formula 1 having a veto over changes to Formula One’s regulations and receiving more prize money than other teams are almost urban myths. No direct evidence has ever been presented to prove them. Until now.

A few weeks ago Italian newspaper Corriere dello Sport shed new light on one of the longest-running rumours in the history of Formula One. It claimed that Ferrari has a veto over any change to F1’s regulations and it added that Max Mosley, former president of motor sport’s governing body the Fédération Internationale de l’Automobile (FIA), awarded the privilege to the team in 2005 to prevent it leaving. It certainly wasn’t the first time that this kind of rumour has been reported but it may well be the last because evidence has come to light which at last proves that Ferrari does indeed have a veto.

F1’s new season got underway last month in Australia despite the expiry at the end of 2012 of the Concorde Agreement, the contract which commits the teams to race. This was signed by the teams, the FIA and F1’s rightsholder the F1 Group, which is controlled by private equity firm CVC and run by Bernie Ecclestone. The teams lined up on the grid in Australia and the race went ahead as usual largely due to the existence of several crucial contracts.

In 2001 the F1 Group paid $313.6m for the rights to host the ‘FIA Formula One World Championship’ for 100 years from 2011. The contract which grants the rights is not as well-known as the Concorde but is still important and is called the Umbrella Agreement. It grants the F1 Group the rights to F1 which in turn enables Ecclestone to do deals with circuits and television stations to allow the races to go ahead and be seen.

The FIA draws up the Technical Regulations which the teams must abide by and it also grants them entries to the championship. Without the Concorde, Ecclestone has no guarantee that the teams will attend every race. The Concorde also ratifies the technical regulations that the teams will race under and confirms the commercial terms of their involvement with F1 such as the amount of prize money they will receive. So why did the first two races take place as normal despite the Concorde being unsigned?

The answer is that although the teams have not signed a joint contract with the F1 Group, ten of them have committed separately by signing up to what are known as ‘Team Agreements’, with all the teams signed up except for Marussia. Each contract runs from the start of this year until the end of 2020 and some confer different benefits to the signatories. Ferrari’s is by far the most lucrative.

The extent of Ferrari Formula 1 power is buried deep in the 498-page prospectus for the flotation of F1 on the Singapore stock exchange which CVC has said it hopes will take place later this year. On page 179, in the section about the Team Agreements it states that “in respect of Ferrari only, Ferrari may terminate if the regulatory safeguards agreed between the FIA and Ferrari do not allow Ferrari to veto any change to the regulations already announced or introduced (subject to certain exceptions).”

It proves the rumours to be true but there is more. The prospectus, and reports by financial analysts, also reveal that Ferrari gets more prize money than any other team. The main prize fund is distributed to the top ten teams depending on their position in the standings and it is comprised of 47.5% of the F1 Group’s underlying profit which is known as Earnings Before Interest, Taxes Depreciation and Amortisation (EBITDA). The F1 Group’s latest financial statements are for 2011 and they show that the main prize fund came to $557.1m.

Page 176 of the prospectus confirms that under the Team Agreements two additional percentages will be shared out. However, crucially, only certain teams benefit from them. The first is “the greater of 7.5% of our Prize Fund EBITDA, and US$100 million (the ‘CCB Fund’).” The prospectus adds that “The CCB Fund shall be shared amongst the CCB Teams meaning each of the top three Teams determined primarily on Events won in the four seasons prior to 2012.”

Until the end of last year Ferrari got an additional 2.5% of F1’s profits to itself but according to page 176 of the prospectus, and the analysts’ reports, this now comes to “the greater of an amount which is capped at 5% of our Prize Fund EBITDA and US$62.2 million.”

It gets preferential treatment because it is the only team which has competed every year since F1 began in 1950 and has won more titles than any of its rivals. Ferrari is also the only car manufacturer involved with F1 which directly signs contracts with the F1 Group rather than using a subsidiary company to do so. This gives recourse directly to Ferrari itself if the contract is breached whereas a subsidiary company could easily be shut down.

So important is Ferrari Formula 1 status as the longest standing team that it even has control over the race weekend. Page 177 of the prospectus reveals that the F1 Group has “agreed to give to the Longest Standing Team, if it is a manufacturer of GT racing cars, a right of first refusal to run an international motor sport series for its cars as a support event (i.e. to be included in the track programme of an Event as a support event to the World Championship) on terms and conditions no less favourable to the Longest Standing Team than those granted to other entities.”

Ferrari’s chairman Luca di Montezemolo also benefits directly from having steered the manufacturer to success in F1. He has been granted an option on a 0.25% stake in F1 if it floats and in March last year he was appointed a non-executive director of the F1 Group’s ultimate parent company Delta Topco.

Di Montezemolo now has a say in shaping F1’s future as he sits on its remuneration and nomination committees. The former approves the policy for determining how much directors get paid and the latter recommends which directors should be re-appointed. Ecclestone’s contract has no fixed term so it falls outside the remit of the nomination committee which goes to show that there are limits to Ferrari Formula 1 influence after all.

Although there is no doubt about whether Ferrari Formula 1 has a veto, the next matter of great speculation is sure to be whether it has used it.