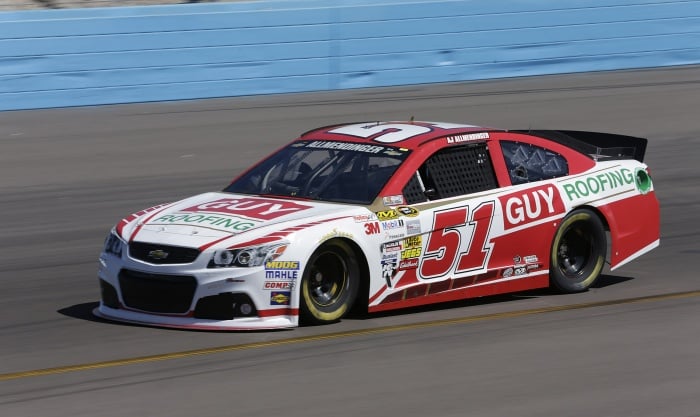 Its driver had left for another team. Its 18-person workforce faced updating a fleet of race cars. And its sponsor-strapped owner was talking about potentially shutting down the Phoenix Racing stable.

That was the situation Phoenix Racing faced prior to the 2013 Sprint Cup season, one that promised to tax the little organization like never before. Kurt Busch had moved on to Furniture Row Racing. The implementation of the redesigned Generation-6 car meant a lot of work for a team without a lot of employees. And owner James Finch openly wondered how much longer he’d be willing or able to fund everything out of his own pocket.

And indeed, this season has had an impact on Phoenix Racing — just not the one so many expected. Two weeks ago at Auto Club Speedway, there was the No. 51 hauler parked in between those of title contenders Denny Hamlin and Kasey Kahne. Heading to Martinsville Speedway this week, Finch’s car stands ninth in Sprint Cup owners’ points, a rather unexpected position for a team that doesn’t have a permanent driver, and competes at a distinct disadvantage in terms of sponsorship and personnel.

“It’s been really good,” general manager Steve Barkdoll said from the team’s shop in Spartanburg, S.C. “Our little group of 18, we basically work seven days a week. We may take a half a day off for travel, but you still have to travel that day. But when the guys come in here on Monday, we’re trying to figure out what we can do. If you can run consistently in the top 15 like we’re doing, you give yourself that ability to maybe have a chance at the end to make that pit call to be up front, to win a race if you’re running up front. But all our guys believe in what we have, and they believe in our drivers that we’re working with, too.”

This wasn’t supposed to happen, not in the season after former Sprint Cup champion Busch moved on, not in a year requiring a total overhaul of all the race cars, not with Finch using his own checkbook to make up for sponsorship shortages. But the team’s rotating cast of drivers has consistently brought the car home in one piece, a very big deal for an organization that dealt with more than its share of crashes last season. And for a small outfit like Phoenix Racing, the manufacturer-supplied stamped parts of the Gen-6 allow for a faster turnaround rate and more time to fine-tune the vehicle for that weekend.

“One thing about this car, even though the parts and pieces came a little bit late, this car doesn’t have to be at the body hanger’s (as long). It’s more like a model kit,” Barkdoll said. “So it’s there less time, which allows a smaller organization like ours to be able to work on it in the shop more. And then not tearing stuff up this year is helping us also.”

No small detail, given that Phoenix Racing crashed out of seven races last year, a rate sure to tax a program with such a small workforce. This season, drivers haven’t only kept the car clean, but also competitive — Regan Smith opened with a seventh-place run in the Daytona 500, and AJ Allmendinger hasn’t finished worse than 16th in his three starts. The team’s lowest finish to date is 21st by Nationwide Series regular Austin Dillon at Las Vegas.

Sponsorship remains an issue. “We don’t have anything for the majority of the races,” Barkdoll said. That puts an even greater emphasis on the positives — drivers staying out of trouble on the race track, Hendrick Motorsports engines, a Gen-6 car that in this case seems to be delivering on its promise of leveling the playing field. However it’s happening, Phoenix for the moment is successfully competing with teams that have millions more in sponsorship dollars and hundreds more employees.

“I have to think it makes some of the bigger owners take a look at their organizations, because we have 17 full-time employees,” Barkdoll said. “That’s counting the secretary, two truck drivers, and myself. Now you’re talking 14 people that work on the race cars, basically. To be able to do that with such a small group, you couldn’t come in here and tell people we couldn’t do it, because everybody here believes we can do it. Certainly working with Hendrick and getting their engines, knowing we have the same power as Jeff (Gordon) and Jimmie (Johnson) and Dale (Earnhardt Jr.) have, makes us believe in what we do. But everybody’s very proud of what we’re doing.”

Can they keep it up? Small, physical Martinsville looms as a challenge, given that Phoenix has historically run better on bigger tracks. Smith is back behind the wheel this weekend, and then on standby at Texas for Allmendinger, who recently inked a limited IndyCar deal with Penske Racing and will be undergoing Indianapolis 500 rookie orientation the same week. But Barkdoll expects Allmendinger to be in the seat at Fort Worth, and then it’s likely Smith again at Kansas given that Allmendinger might be running the open-wheel event at Long Beach the same weekend.

At Richmond, Ryan Truex — a Camping World Truck Series driver and younger brother of Martin Truex Jr. — will make his Sprint Cup debut in the No. 51. Barkdoll said Finch and Truex’s father Martin Truex Sr. are friends, and that the driver also brings some sponsorship.

“We just have to look at being creative right now to find sponsors, and he has some sponsors,” Barkdoll said. “And James is always willing to take a chance on young drivers. (Truex) has done some testing for some of those organizations. If we had our best-case scenario, we’d love to find a full-time sponsor and just race full-time with AJ, because Regan has his full-time Nationwide thing. But right now that’s just not the case.”

Smith, who has a full-time Nationwide Series ride with JR Motorsports, will return to the car at Talladega and Darlington as Allmendinger begins Month of May activities at Indianapolis. Juggling drivers is becoming routine for a team that so far has remained competitive despite its disadvantages, and now faces the test of sustaining that success through the rest of the year.

“It’s certainly a money-driven sport, and right now there are no plans to change course,” Barkdoll said. “We just have to figure out how to get a sponsor in here that can help us help James. He hasn’t called up and said, ‘Hey, don’t buy brake pads this week. Use the ones you used last week.’ He’s never done that. But two years in a row without a primary sponsor is pretty tough on somebody.”