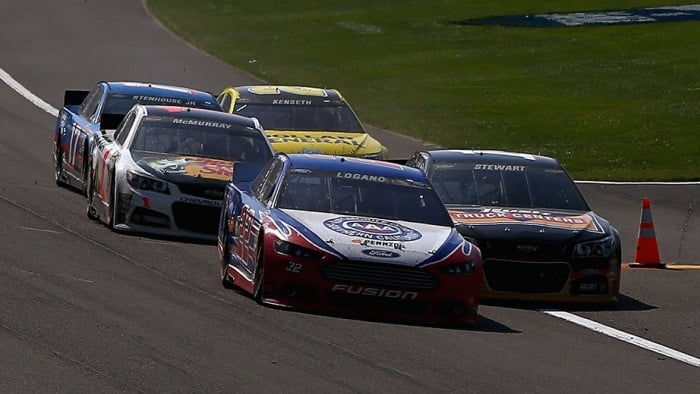 NASCAR blocking Newman calls tactic a “chicken” move; Dale Jr. not so much.

NASCAR blocking or impeding the progress of a trailing competitor while attempting to maintain or improve one’s on position on the track. It’s hardly new to NASCAR.

Ryan Newman describes it as “chicken.”

Dale Earnhardt Jr. says he expects it and accepts it.

The issue of NASCAR blocking returned to the spotlight when Tony Stewart took exception to Joey Logano’s efforts to keep Stewart behind him during a late-race restart at Auto Club Speedway.

“I think blocking is a chicken way to drive,” Newman said April 2 during a NASCAR national teleconference. “It’s just something I don’t do.

“If you’ve got a run on me, take it. If I can get through the corner better than you, then we’ll race, but blocking is … an open-wheel type move, it seems like.

“You’re there to race; you’re not there to block. … It’s just a chicken way of driving and not very respectful for the guys around you.”

Stewart’s frustration following the Auto Club 400 led to an altercation between the three-time NASCAR Sprint Cup Series champion and Logano, who eventually succeeded him at Joe Gibbs Racing.

“What the hell do you think I was mad about?” an angry Stewart said when asked about the incident moments after it occurred.

Logano, the leader with 11 laps remaining when the race resumed following a caution period, moved low on the track to block Stewart’s advances once the green flag reappeared.

Logano said he “had to throw the block there.

“That was the race for the lead,” the 22-year-old said afterward. “I felt if the 14 (of Stewart) got underneath me, that was going to be the end of my opportunity to win the race.”

He was “protecting” his spot, he said.

Neither won the race — Logano tangled with Denny Hamlin on the final lap and finished third while Stewart, simmering, eventually took the checkered flag in 22nd.

Shortly thereafter, things got a bit heated around Logano’s No. 22 Penske Racing Ford as it sat on pit road.

“My opinion is that … I might block in certain situations,” Earnhardt Jr. said April 2. “I would expect and accept to be blocked in certain situations. But you’ve got to give me race track. You’ve got to give me somewhere to run. You can’t just run me up into the fence. … If you give me a reasonable amount of race track to race on, then I really can’t complain in regards to what you’re trying to do to maintain the position.”

Was Logano wrong for blocking Stewart? Given the number of times blocking occurs, did Stewart overreact?

If it is acceptable for a driver to use his car to move a fellow competitor out of the way in the closing laps of a race, is it any different when a driver in front uses his car to slow another’s progress?

In the aftermath of a 24-car pileup on the final lap last fall at Talladega, it was Stewart who said, “I just screwed up. … It was my fault blocking to stay where I was at. So, I take 100 percent of the blame.”

How blocking is viewed by competitors is often determined by when it takes place. Just as intentional contact is often viewed differently when drivers are “going for the win.”

“Tony is one of the best, but I have to say he tried to block us at Talladega in the fall and wrecked the entire field. That’s racin,’ ” Michael Waltrip Racing crew chief Rodney Childers tweeted a day after the California incident.

“If my driver didn’t try to hold his position on the restart for the chance to win, I would be really pissed.”

Strip away the last-lap mentality and drivers often see such incidents in a different, less forgiving light.

“Is the position that important at that moment in time?” Earnhardt Jr. asked. “Everybody will have a different opinion.

”I’m not going to say I’ve never blocked anybody because I have. … Being in certain situations, that’s your only alternative.”

Newman, a teammate of Stewart’s at SHR, said he did not know if Stewart and Logano had spoken to one another since the post-race incident.

“I don’t know if they talked, plan on talking or won’t ever talk again,” he said.

Brad Keselowski frustrated with blocking at Daytona; Hamlin chimes in