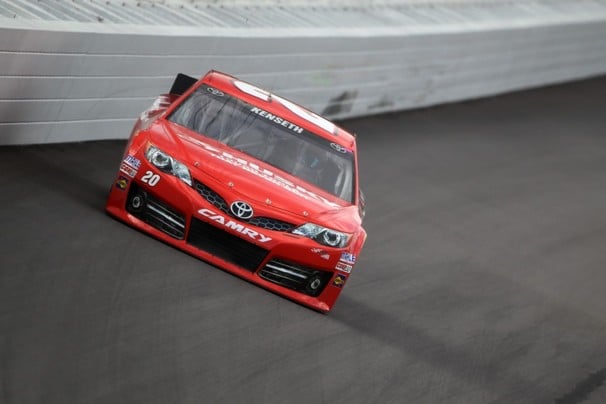 Matt Kenseth might as well have skipped the race at Kansas Speedway after NASCAR Penalties.

Matt Kenseth got to keep his shiny new trophy for winning at Kansas Speedway last weekend, but not much else as he now faces harsh NASCAR Penalties.

NASCAR crushed Kenseth’s No. 20 team with massive penalties on Wednesday for running an engine that contained a part that was too light.

Regardless of the intent, that’s illegal.

And if  have been consistent on one thing over the years, it’s that teams should not mess with the engines under any circumstances.

Kenseth’s win and bonus points no longer count toward qualifying for the 10-race Chase for the Sprint Cup or one of the two wild card slots awarded, nor does his pole position earn him a spot in next season’s Sprint Unlimited, which features pole winners.

So basically, Kenseth would have been better off had he not shown up to Kansas at all.

Of course, Kenseth didn’t know that. Neither did Joe Gibbs Racing, which now faces the sudden possibility that two of its three drivers — including Kenseth and the injured Denny Hamlin — could unexpectedly miss the Chase. JGR’s engines are supplied by Toyota Racing Development, which is responsible for the parts that go into them.

TRD acknowledged its role in a statement shortly after the penalties were issued, but claimed there was no performance advantage or intent to deceive. It was just a “simple oversight,” the statement said.

But TRD and Joe Gibbs Racing, which has said it will appeal the penalties, will soon learn that doesn’t matter.

NASCAR has repeatedly said it does not judge intent — only whether the parts were legal or not. In this case, even TRD is acknowledging one small engine connecting rod was three grams too light.

Appealing might be some sort of Hail Mary with hopes that JGR can seek sympathy by saying it wasn’t responsible, but that’s a longshot. Rules are rules, especially when it comes to the engines.

Crew chiefs can continue to risk suspensions and fines by playing in NASCAR’s gray area — like Penske Racing did two weeks ago at Texas. But something relating to the engine’s black-and-white rules — intentional or not — means NASCAR has no choice but to wield its powerful hammer of justice with NASCAR Penalties.

Unintentional or not, Kenseth’s race-winning car had an illegal engine. In that regard, Wednesday’s penalties were harsh but appropriate.