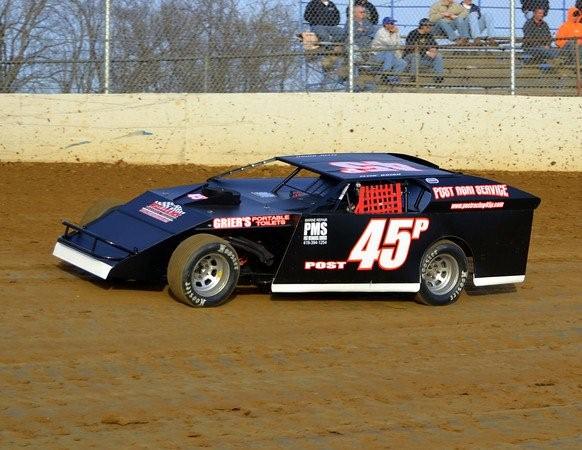 Dubbed Saturday Night SpeedFest, it was the historic track’s third attempt to race this season.  Mother Nature tried to intervene again, as light rain fell several times throughout the night, but the teams rallied and the entire show was completed in two hours and eight minutes.

The score sheets may show Post leading all 18 laps, but the replay video shows a host of drivers on his bumper the entire distance.  Five cautions and one red flag bunched up the field behind Post, yet each time he was able to maintain control. The final slow down, a red flag, came with three laps to go as Schuyler Nahre’s front tire made contact with another driver’s front tire, sending him barrel flipping high in the air before slamming hard to the track. He walked away under his own power but was later transferred to Community Health Center in Coldwater, OH for observation.

On that last restart, Post pulled away from Jeff Babcock and Jerry Bowersock – two veteran drivers who have a combined 32 Modified wins between them — down the backstretch and won by 0.748 seconds.

“This is our first time in this car so this is awesome to come out here and beat the best Modified drivers in the country,” said Post, who pumped his fist in the air in celebration after taking the checkered flag. “I want to thank the fans for coming out and my dad for believing we could win, especially here.”

Yelton was equally excited in his Tuff Truck victory. He wrestled the lead away from Danny Kelly after eight completed laps, and then fought off bumper-to-bumper, door-to-door challenges from Jerry Sawmiller, Roy Miller and Mike Sawmiller.  Able to throw a blanket over those top four cars the final seven laps of the 15-lapper, Yelton received a bump draft push of sorts from Miller to keep him out front. Yelton then pulled off a veteran move in the final turn. Jerry Sawmiller pulled an Eldora slide job and got underneath Yelton in Turn 3, but Yelton returned the favor and went low in Turn 4 to beat Sawmiller to the finish line by 0.158 seconds.

“Man, I thought he had me. I took a chance and just dove,” Yelton said of that winning slide job. “That’s good racing by Jerry, by everybody. … We just got the truck put together this morning. I couldn’t have asked for a better night.”

In the Stock Cars, Craig opened defense of his 2012 Eldora track title with a comfortable victory. Craig needed just three laps to leap from third to first, and never relinquished his lead once he got there. With two laps complete Craig used a slide job to take second away from Shawn Phillipi, then set sail for leader Chris Douglas. He caught him on the next lap and went high in Turns 3-4. Craig used the momentum to drag race Douglas to the finish line and grab first.

Craig stretched his lead to 3.1 seconds over the field after nine laps but a caution grouped the field behind him. Douglas went low on the restart and nearly got underneath Craig. But the momentum of running high helped Craig hold off the challenge.

“The track was heavy, it was hammer down and I did what I had to get it to the front,” Craig said of the win.

Eldora Speedway 2013 returns to action with the World of Outlaws STP Sprints on May 3-4. The Eldora Stock Cars join the Outlaws on Friday and the UMP DIRTcar Modifieds on Saturday. Complete event and advance ticket purchase information for the World of Outlaws weekend, along with the other exciting race events on the 2013 Eldora calendar, is available on the track’s website www.EldoraSpeedway.com. Race fans and race teams can get behind-the-scenes access by following @EldoraSpeedway on Twitter, hitting ‘Like’ at Facebook.com/EldoraSpeedway and view video highlights at YouTube.com/EldoraSpeedwayInc. The new Eldora Speedway app for the iPhone, iPad and Android is now available for download via iTunes and Google Play.