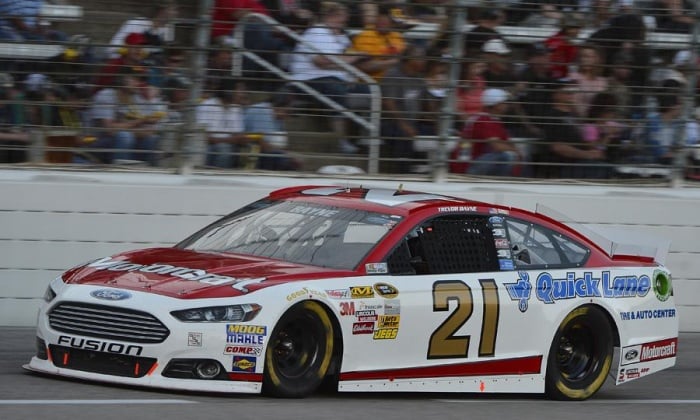 Like nearly everyone in America this week, Eddie Wood and his fellow members of the Motorcraft/Quick Lane team have had the weather on their minds, especially after the heart-breaking death and damage that massive tornados caused in Oklahoma on Tuesday.

Eddie Wood and his crew also have been keeping an eye on the forecast for Charlotte on Thursday, when qualifying is scheduled for Sunday’s Coca-Cola 600, and there’s a chance of rain.

Eddie Wood is hoping for clear skies and a fast Ford Fusion so his family team can reach a milestone 1,400 Sprint Cup starts, dating back to Glen Wood’s first appearance in NASCAR’s elite division, at Martinsville Speedway on May 17, 1953, driving a 1953 Lincoln. Should there be rain, enough rain for qualifying to be cancelled, the team would miss the race. By competing on a limited schedule, the team has made fewer attempts to qualify for races this season than the other teams not otherwise locked into the starting field.

In rainouts, the final starting slots go to teams based on the number of attempts to qualify.

“Considering the tragedy and loss the people of Oklahoma have suffered, our weather concerns don’t seem that important,” Wood said. “But the Wood Brothers have run 1,399 races, and we plan to run a lot more in the future. If we miss Charlotte, we’ll make our 1,400th start somewhere else.”

Charlotte would be an appropriate venue, as the team got its first superspeedway victory there in the 1960 National 400 with Speedy Thompson at the wheel.

Crew chief Donnie Wingo also is hoping the weather works out in the team’s favor, as he and driver Trevor Bayne are looking forward to getting the No. 21 Motorcraft/Quick Lane Ford Fusion back into Sprint Cup action.

“We’re taking the same Ford Fusion we ran at Texas and Las Vegas,” Wingo said. “It was our best chassis last year, and we’ve done a lot of work on it since.”

Wingo, Bayne and the Motorcraft/Quick Lane crew also are hoping to keep up the momentum from two recent test sessions, at Indianapolis Motor Speedway and Michigan International Speedway.

“We tested with a different car, but you always pick up things that can help you at other places and with other cars,” Wingo said.

The veteran crew chief will be putting his experience – recent and long-term – to work should the team make the field for NASCAR’s longest race.

“I like the challenge of 600 miles,” he said. “It requires a lot of preparation, and you have to build a lot of adjustability into the car because the race goes from daytime into night, and Charlotte is one of the most heat-sensitive tracks we race on.”

Qualifying for the Coca-Cola 600 is scheduled for Thursday at 7:10 p.m., and the race is set to get the green flag just after 6 p.m. on Sunday with TV coverage on FOX.