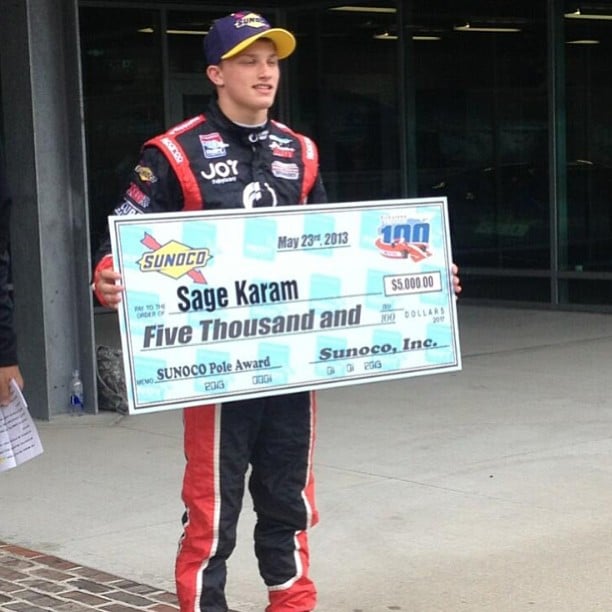 Sage Karam Starts On Pole For Freedom 100 In Indianapolis Debut

Freedom 100 competitors are quick to let Sage Karam (SageKaram.com) know that over 40 laps on a 2.5-mile oval it’s not so much where you qualify as where you’re set up for the final sprint.

The Freedom 100 race will be broadcast live at noon (ET) on NBC Sports Network and on the IMS Radio Network on www.indycar.com.

Karam, driving the No. 8 Comfort Revolutions car for Schmidt Peterson Motorsports with Curb-Agajanian, is in his first season in the series after placing third in the Pro Mazda Championship in 2012. He has a pair of podium finishes in the three races on road/street circuits.

“It’s definitely a big confidence-booster,” said Karam, who was quickest in the truncated morning practice session. “The fact that we really didn’t even work on qualifying setup, it was a big surprise. We were really just working on race setup the whole month. The rain really threw us a curveball and the crew responded really well.”

Freedom 100 qualifications were delayed three hours because of a persistent light rain that cut short the morning session. The 11 drivers will face a green track when they line up.

“It’s going to be a lot of strategy,” Karam continued. “I know this race comes down to the last 10 laps, there’s a lot of draft here. Getting the pole is awesome but it’s really not as important as other tracks. Definitely it’s going to be strategy, it’s going to be a big mental thing, and like I said, I know we have a good race car so I’m really stoked about it.”

Series championship points leader Carlos Munoz, who recorded a two-lap average of 189.276 mph, will start second in the No. 26 Dialy-Ser Andretti Autosport car. He was .0703 of a second off Karam’s cumulative time over the five miles. Munoz also will start second in his maiden Indianapolis 500 Mile Race on May 26.

“It was totally different as I was used to the IndyCar (and) to go back to Indy Lights,” said Munoz, who’s won two of the three races this season. “They have a great car, and we will focus on the race. Here in Indy Lights, the qualifying is not as important as the tow in the race. Here (at the Indianapolis Motor Speedway) the race is really amusing. We had so much fun last year in that race because we were overtaking all the time. But I am going one by one. I am focusing first with Indy Lights – then I will focus on the Indy 500.”

“We had a good run, qualified fifth, the car was pretty decent and we’re pretty happy with it,” Hawksworth said. “The Freedom 100 qualifying round doesn’t mean too much so we can’t read too much into it. It’s going to be about what happens (in the race). I was very happy with the race care the last time we ran it so I think we’re in for a good race.”