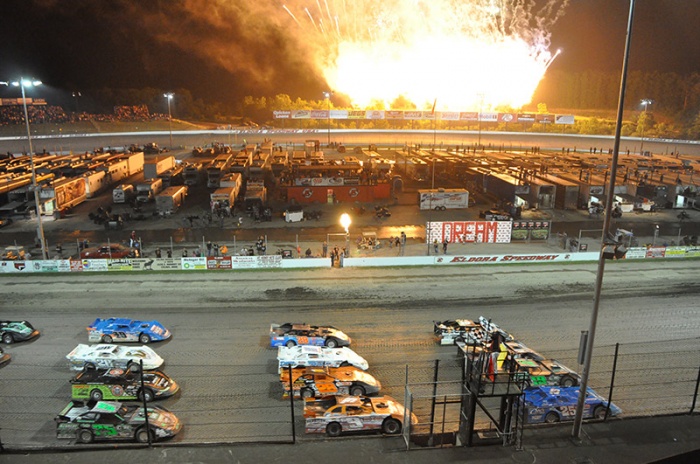 It was vintage Scott Bloomquist at Eldora Speedway on Saturday night as the Mooresburg, Tenn., driver, known for his classic late lap charges through the field, replicated that effort to pocket another $100,000-to-win, 100-lap victory at the historic .500-mile clay oval. It was Bloomquist’s sixth Dream victory and first since 2008.

“That about as sweet of a handling car, I could do anything with it. I could run middle, bottom, high,” said Scott Bloomquist, who started sixth in the field. “Overall, I was in such control I felt real comfortable the whole race no matter how close we ran to the wall. They key was to be able to pull off the wall. I can’t say enough. The car was awesome.”

The field had no answers for Scott Bloomquist, even with a tension-filled restart with two laps left. Scott Bloomquist rocketed from the pack on that green-white-checkered restart and put the wild racing for second place and beyond in his dust. Scott Bloomquist crossed the finish line 1.527 seconds ahead of Dennis Erb Jr. (Carpentersville, Ill.) and Josh Richards (Shinnston, W.Va.). Those two had waged an impressive duel as the closing laps ticked off.

“We just used everything we had to get up to the front. We had a good run,” said Erb, who started 17th and claimed the $20,000 reward for his runner-up spot. “It’s pretty tough when it’s a long race out there. No matter where you start it takes a lot out of you.”

As Scott Bloomquist was rolling onto the victory lane stage, Richards — who charged from his last-place starting spot of 28th — came up 32 pounds light at the scales. He was disqualified after failing to meet the 2,300-pound minimum. That moved Brian Birkhofer (Muscatine, Iowa) up to third. Dale McDowell (Chickamauga, Ga.) and Jimmy Owens (Newport, Tenn.) rounded out the top five.

“They key was having a good enough car to take off on the restart,” Scott Bloomquist said. “I was confident enough I could restart and control the race again. Confidence was high.”

Tyler Reddick, a 17-year old from Corning, Calif., bolted to the lead from the pole. He led the first 21 laps by forcing the tempo. He caught the back of field in just six laps, but appeared to push it a little too hard when he tagged the wall in turn four on a slide job and damaging his spoiler. He retained the lead until lap 21 when the field reeled him in.

“I got a little too aggressive and I hit the wall. It was driving different but it was still pretty good,” said Reddick, who finished 24th.

Jimmy Mars (Menomonie, Wis.) inherited the lead on lap 22 when Reddick fell off pace rolling out of turns 3-4. Mars paced the field with Tim Fuller, Duane Chamberlain, Scott Bloomquist and Birkhofer giving chase. Mars clicked off the lead laps but Scott Bloomquist was quietly making his traditional charge through the field. He moved into third with 47 laps complete and second with 54 down.

“The race track right now is a good as it’s ever been. I just did not want to spend the tires so I let them go,” Scott Bloomquist said. “I knew I was running a fast enough pace not to get (lapped). That’s definitely what made it feel like the old days. We used to wait for the last 30 laps and everybody had already burned their stuff up.”

Scott Bloomquist peeked under Mars on lap 59 and several times after. He finally built enough momentum to get past Mars to lead lap 65. His lead escalated to seven seconds with 20 laps to go. It remained comfortable until nine laps remained with a caution. Scott Bloomquist , choosing to go high on the double-file restarts, ran away and hid from the field until that final restart.

“You hate to see those cautions at the end like that. But the car felt so good. The car just took off,” Scott Bloomquist said. “I could run any line around this race track. We stayed up high and tried to keep the heat out of the tires and not burn them up too early … then make a charge at the end.”

The victory at Eldora was Bloomquist’s first since 2008. It was also his 11th top-five finish in the Dream in a record 17 starts.

“It’s a lot tougher than people think,” Scott Bloomquist said of what had been a difficult season for him until Saturday night. “We’ve had a lot of bad luck on a lot of rough race tracks. I told everybody all this bad luck means we’re just going to come into the Dream and win it. It’s time to turn this thing around and that’s what we did. It’s tough being an owner and driver combination. There’s not too many of us left. It’s expensive to go up and down the road.”

Matt Miller (Whitehouse, Ohio) entered the Dream feature winning two of the three preliminary features in the new format that included Twin 25 features on both Thursday and Friday. He gave chase early and worked his way up to second on lap 87 but pulled off just four laps later with mechanical trouble.

Tickets and campsites for that event, and others on the busy Eldora slate, may be purchased online at www.EldoraSpeedway.com at any time of the day or night; or by calling the speedway office (937) 338-3815 during normal business hours.