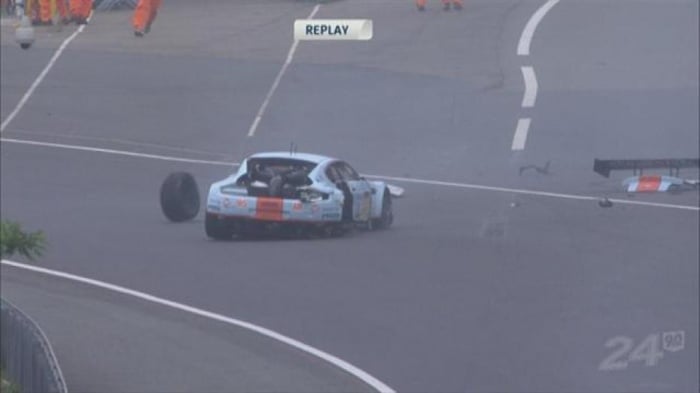 After a gorgeous start with all 56 cars in formation it wasn’t long before the challenging Circuit de la Sarthe started claiming victims, however the Allan Simonsen crash was fetal. The number 95 Aston Martin Racing Aston Martin Vantage GTE of Allan Simonsen, Christoffer Nygaard, Kristian Poulsen suffered a massive shunt at Tetre Rouge, ending the championship leaders day and life only minutes after it started. After the Allan Simonsen crash the driver was found in the car in serious condition, and was transported to the infield care centre, where he died as a result of injuries sustained in the accident.

The guard rail was damaged, making for a long safety car period, but the consequences are now moot, as the racing world has lost another member.

Aston Martin commented once the news of Simonsen’s death had been announced: “… at the specific request of his family, the team will continue to participate in the 24 Hours of Le Mans in tribute to Allan.”

In the LMP1 class, the #1 Audi of Marcel Fässler, Andre Lotterer, Benoit Tréluyer is leading over his other two team cars. The Toyota of Alexander Wurz, Nicolas Lapierre, Kazuki Nakajima is sitting fourth, but has been having major electrical issues causing the engine to shut off. The team is working on the issue.

Conditions on track are tough around the Dunlop Curves, as on-and-off rain is causing cars to slide off track each lap. Not enough rain has fallen to warrant rain tyres.