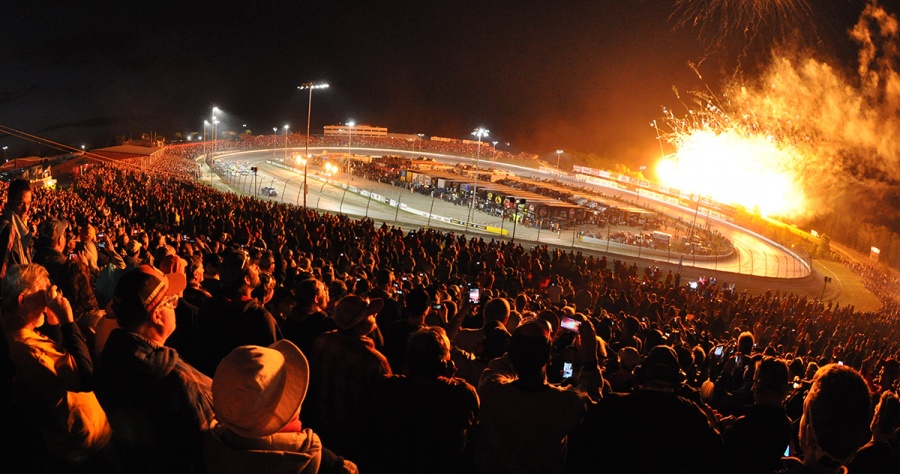 Racing in the series for the first time since winning the 2011 championship, Dillon pulled away during a green-white-checkered-flag finish to win Wednesday night’s CarCash Mudsummer Classic at Eldora Speedway, the first dirt-track race in any of NASCAR’s top three series since Richard Petty triumphed at the North Carolina State Fairgrounds in Raleigh, N.C., on Sept. 30, 1970.

But the real winners were those who took the leap of faith to stage a mid-week race on dirt, those who came to rural Ohio to see it and those who consumed it through broadcast media.

“It feels amazing,” said Dillon, who started 19th and quickly worked his way forward. “Going into this week, I was just really focused on doing whatever it took to make sure we had a good show for the fans and NASCAR so we could come back again…

“I think it was a success. It was such a great show… This is real racing right here, and that’s all I’ve got to say.”

Adroitly using his dirt-track experience to work his way through traffic, Larson charged from his 13th-place starting position to the lead during the first 60-lap segment of the race. On Lap 39, Larson passed Timothy Peters for the top spot and pulled away to a lead of more than 3 seconds.

On Lap 54, NASCAR called a caution after debris from Scott Bloomquist’s Toyota landed in the racing groove, and that yellow carried over through the end of the first segment.

Larson led the field to green to start the second segment of 50 laps, but on Lap 89 Austin Dillon grabbed the top spot in heavy traffic. The segment ended with Larson in hot pursuit of Dillon but unable to complete the pass.

To Larson, Dillon’s pass in traffic on Lap 89, and a caution a lap later — moments after Larson had regained the top spot — were decisive. Dillon kept the lead for a restart on Lap 97 because Dillon had been in front at the last scoring loop before the yellow.

“I was getting through traffic really good, and I spent a few laps behind that truck — I think it was the 77 (German Quiroga),” Larson said. “I was just getting a little bit impatient, and I got into his left rear with my right front. It kind of jerked the wheel right out of my hand and got me all out of shape.

“Austin was able to scoot by. I got back by right as the yellow came out, and that’s what kind of killed the race for us.”

After pit stops, Dillon and Larson took the green side by side to commence the final 40 laps.

Though a series of five heat races determined the starting order for the main event, Ken Schrader, 58, earned the distinction as the Keystone Light Pole winner during time trials that preceded the heats. Benefiting from an early draw, Schrader covered the half-mile distance in 19.709 seconds (91.329 mph) to become the oldest pole winner in any of NASCAR’s top three touring series.

That distinction had belonged to Dick Trickle, who in 1999 won a NASCAR Nationwide Series pole at Dover at age 57.

Schrader won the first heat race from the pole, holding off fast-closing J.R. Heffner, to lock himself into the top starting position for the 150-lap main event. The NASCAR veteran clearly was excited about his effort after the first heat race.

Schrader edged dirt-track ace Jared Landers (90.891 mph) for the top spot in time trials. Landers, who was driving a NASCAR Camping World Truck for the first time, is the current Eldora track record holder in Dirt Late Models, having turned a lap in 14.922 seconds in that classification.

Most emblematic of the occasion, however, wasn’t Schrader starting up front. It was 61-year-old Norm Benning taking the green from the back of the field — and the fight he put up for the privilege of doing so.

Slamming and banging with Clay Greenfield in the final three laps of the last-chance heat, Benning refused to give up the fifth and final transfer spot into the main event. Drivers who already were locked into the race stood and cheered as Benning and Greenfield pounded each other through the final corner, with Benning prevailing.

Afterwards, crew members and fellow drivers alike congratulated the veteran racer. Yes, Benning had just finished fifth in a last-chance qualifier, but the way he did it captured perfectly the mood at NASCAR’s first national series dirt-track race in 43 years.