CARS CARS: New Ferrari 458 Speciale The Most Powerful V8 Ever 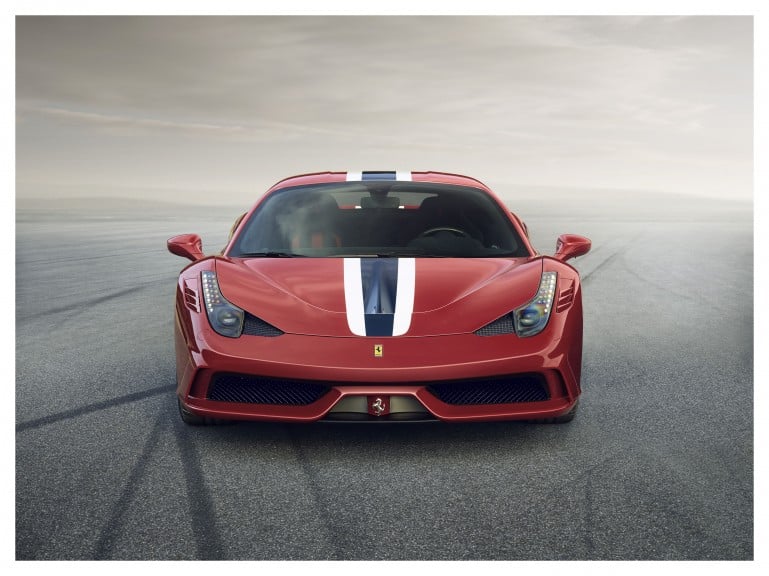 Ferrari has prepared an upgraded version of the venerable 458 Italia for debut at the Frankfurt Motor Show. The Ferrari 458 Speciale Prancing Horse has covered the 458 in improvements, from enhanced aerodynamics to increased power. This special variant promises to add an extra dose of excitement to a sports car already considered one of the best of the best by many a driver and publication.

Ferrari has been using the term “most powerful” an awful lot lately. The 730-hp F12 Berlinetta took on the role of most powerful road Ferrari ever back at the 2012 Geneva Motor Show, ceding it rather quickly to the LaFerrari a year later. The LaFerrari gets its 950 horses from a hybrid powertrain, part of which is Ferrari’s most powerful naturally-aspirated road engine ever, a 789-hp 6.3-liter V12.

The all-new Ferrari 458 Speciale can’t lay claim to “most powerful Ferrari or engine ever,” but since both the F12 and LaFerrari are motivated by a dozen cylinders, it can rightfully boast about the most powerful Ferrari V8 ever. As usual, Ferrari isn’t shy about advertising the claim. It further claims that the 135 cv per liter achieved by the 605-cv (596-hp) 4.5-liter engine is the highest ever put out by any of its road cars.

The Ferrari 458 Speciale upgraded vehicle systems give the driver better control and confidence when rallying the near-600 horses available at his toe tip. The electronic Side Slip angle Control (SSC) keep the car stable and responsive. The SSC system uses a new algorithm to compare the car’s current side slip with a targeted number, adjusting torque management and distribution as needed. Michelin Pilot Sport Cup2 tires apply all that feedback to the ground below.

They will reveal the Ferrari 458 Speciale under the bright lights of the Frankfurt Motor Show on September 10. We anticipate having more in-depth information then.