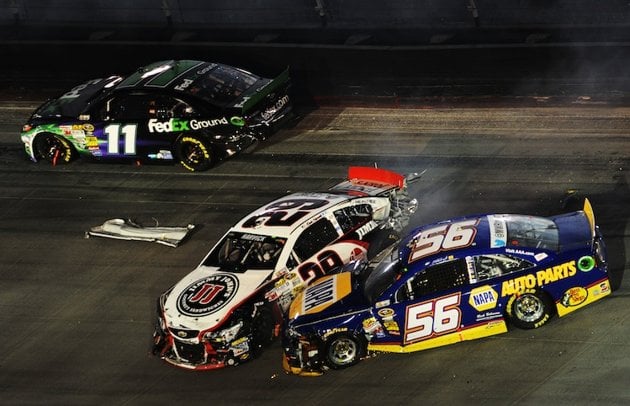 Doctors fitted Truex with a special cast Tuesday he’ll wear indefinitely. The cast enables him to better grip the steering wheel and compete in Sunday’s NASCAR Sprint Cup race at Atlanta Motor Speedway as well as the 11 remaining races.

Truex worked closely with NASCAR this week and has been cleared to race.

A multi-car crash collected Truex on lap 448 Saturday sending the NAPA AUTO PARTS Toyota into the outside wall. Truex was treated in the medical center Saturday.  MWR has yet to determine if a stand-by driver is needed for this weekend.

Truex is 14th in the points and holds the first of two wildcard entries as he seeks his second consecutive berth in NASCAR’s Chase the for Sprint Cup.

Martin Truex Jr. (born June 29, 1980) is an American stock car racing driver. He drives the No. 56 Toyota Camry for Michael Waltrip Racing in the NASCAR Sprint Cup Series. Truex is a two-time Nationwide Series champion; having won the title in 2004 and 2005. His younger brother, Ryan is a champion in the K&N Pro Series East division, while his cousin Curtis raced for JR Motorsports.

Truex had high and low notes in 2013. He had a few top five finishes at a few races. His first best run of 2013 was Texas, when he led during the final 55 laps of the race but came up short losing to Kyle Busch, who passed him to win with 19 laps left in the race. He also had low notes, including an accident at Martinsville and a blown engine at Dover. However, at Sonoma, Truex broke a 218 race winless streak, starting 14th on the starting grid and working his way up to win by over eight seconds over Jeff Gordon. The 218-race winless streak is second only toBill Elliott, who went winless in 226 races between 1994 to 2001. It is only the second time a car number 56 won in NASCAR’s highest division, the first being Jim Hurtubise in a 1966 Atlanta race. Martin Truex Jr Bristol Crash on Lap 448 that resulted in his suffering a broken right wrist; he intended to continue racing despite the injury.