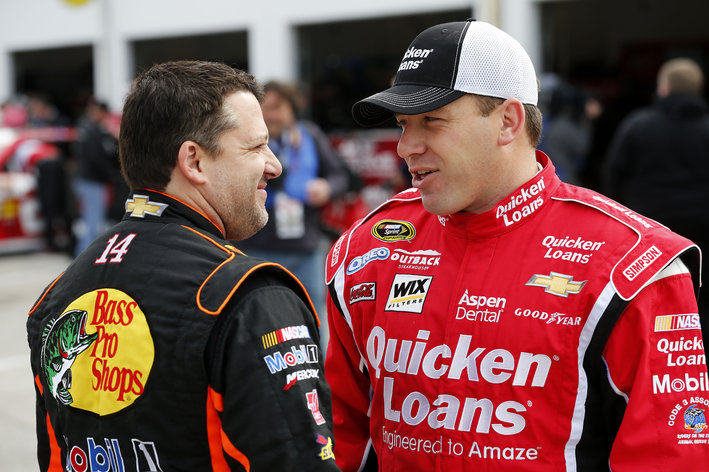 At the time of the July announcement at New Hampshire, Stewart said the organization didn’t have room for four drivers. A little more than a month later, Kurt Busch was offered a contract to join the team.

Furious fans have accused Stewart of lying to his longtime friend, which Newman said Thursday he does not believe was the case.

“I don’t think Tony at all lied to me,” Newman said at Richmond International Raceway. “I don’t have any of that feeling or emotion, and I don’t think any of that matters because the plans that they made are for 2014 and I am not a part of that. I don’t think there were any hidden agendas on Tony’s behalf. I’ve had a good relationship with him, and have been open with him, and my communication has been mostly with him in my whole relationship at Stewart-Haas Racing.”

It was SHR co-owner Gene Haas who did the deal with Busch without Stewart’s knowledge, and most of it was completed while Stewart was incapacitated with a broken leg following his Aug. 5 sprint car crash.

“I don’t have any hard feelings,” Newman said. “I know a lot of things became very tough for Tony once he became injured, and that (the Busch deal) kind of happened at the same time. That’s kind of like what we do in our business. You’ve got to get through the tough times.”

Stewart has been bothered by the notion that he was not truthful to Newman, and said during his first news conference since the accident this week that he stopped watching all the NASCAR talk shows when former driver and current analyst Kyle Petty weighed in on the topic.

“I was pretty disappointed to hear Kyle Petty say that we basically lied to Ryan and deceived Ryan,” Stewart said. “Deceived was the word that he used actually. They said we deceived him … in doing this.”

Although Ryan Newman and Tony Stewart have started some conversations, he hasn’t had a chance to have the talk he’d like to about the Busch hiring.

“Ryan and my relationship is still the same. Since this has happened the last week, I really haven’t had time to sit down with a heart to heart,” Stewart said. “The biggest thing is I want him to focus on what we’re trying to accomplish this year, and even when we spoke earlier this year before we made the announcement at Loudon, we were both very adamant to each other that our friendship was going to stay the same and we both knew where each of us stood as far as the business side of this and understanding that it wasn’t emotionally driven, that it was business driven, and that through this our friendship would stay the same, and this won’t change that.”

For now, the focus is on Newman trying to make the Chase for the Sprint Cup championship for SHR. He heads into Saturday night’s deciding race ranked 14th in the standings, 20 points behind 10th-place driver Busch, but with a win and a shot at claiming a wild card.

Newman is trying to balance earning a spot in the Chase and putting together a plan for 2014, which he said Thursday he’s close to announcing. He’s believed to be in line for a ride at Richard Childress Racing, and a deal likely became closer to completion this week with Wednesday’s announcement that Jeff Burton won’t return to the team next year.

Newman admitted he spent time this week working on his 2014 deal, and also spent time on his farm, which was a nice distraction.

“I spent some time this week working on next year, which I can’t really talk a lot about, and some time on my farm because it was the first time it didn’t rain,” he said. “To me that helps balance out some of the mental sanity of dealing with next year. I’ve actually watched and heard and saw some of Kurt’s comments on how he’s focused on the race and how he’s focused on the other stuff during the week, and I’ve actually been the same way during the week.”