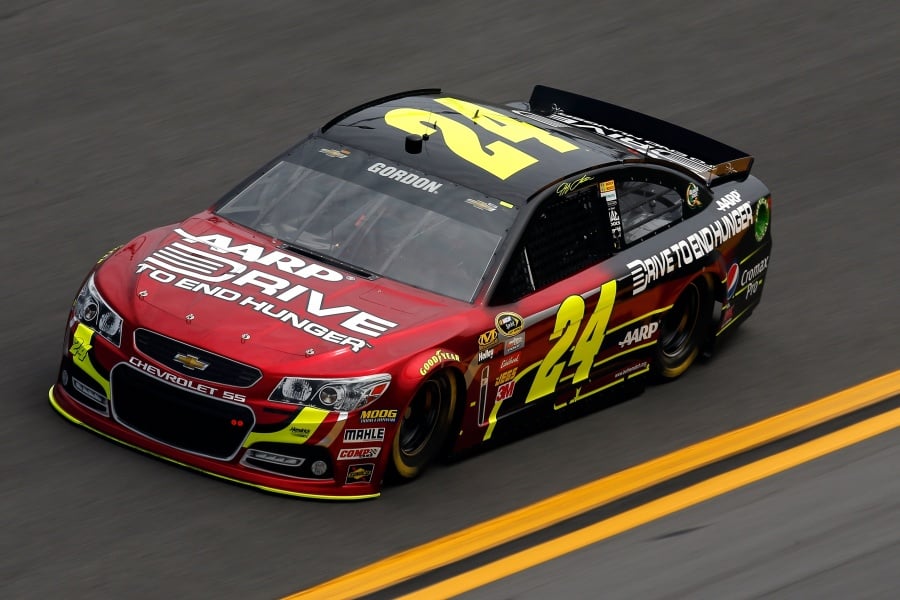 Jeff Gordon Added To The Chase As 13th Driver

OLIET, Ill. — Saying it was “the right thing to do,” NASCAR Chairman and CEO Brian France announced Friday that four-time champion Jeff Gordon added to the chase for the NASCAR Sprint Cup field.

The decision means there will be 13 drivers in this year’s field for the 10-race playoff, scheduled to begin Sunday here at Chicagoland Speedway.

“More than anything, it’s the right thing to do,” France said during a joint press conference with NASCAR President Mike Helton held at the track. “There were just too many things that went on Saturday night that gave a clear disadvantage to the 24.”

Gordon, driver of the No. 24 Chevrolet for Hendrick Motorsports, failed to make the Chase field after falling just short of a top-10 points position. Because he had no wins through the season’s first 26 races, he also was not in position to earn one of the two Wild Card berths.

But in a scenario that has brought forth a week’s worth of repercussions, Gordon’s addition is just the most recent twist. On Monday, officials announced that Michael Waltrip Racing, which fields three NASCAR Sprint Cup Series teams for drivers Clint Bowyer, Martin Truex Jr. and Brian Vickers, had been penalized for actions that occurred in the waning stages of Saturday’s Federated Auto Parts 400 atRichmond International Raceway.

The points swing — the three drivers were docked 50 points each — resulted in the removal of Truex Jr. from the Chase field, and elevated Ryan Newman into the final Wild Card position.

“But cumulatively they were just overwhelmingly, in our view, in such a way that that just wasn’t fair. We needed to try to see if there was a way that ‑‑ we can’t go back and run the event again, but we also are trying to be as fair and equitable as we can with all the teams. And this is an example of that.”

Meanwhile, reports of alleged collusion between the No. 22 team of Penske Racing and the No. 38 of Front Row Motorsports at Richmond surfaced two days after the MWR penalties were handed down.

In addition to announcing Gordon’s inclusion to the Chase field, officials also said the Penske and FRM organizations have been placed on probation for the remainder of the year.

The decision to add Gordon was “based on the totality of the events that were outside” of the No. 24 team’s control, according to France.

“We believe in looking at all of it that there were too many things that altered the event and gave an unfair disadvantage to Jeff and his team, who would have qualified, and I have the authority to do that,” he said. “We are going to do that.

“What occurred at Richmond was not of their making, and they’ve had to wrestle with some very difficult decisions throughout the week,” Hendrick said in a statement issued by the four-team Cup organization. “I know everything done by NASCAR has been a sincere effort to be fair and ultimately do what’s best for our sport and our fans.”

“Wow we just gained 1250 points! Very appreciative of @NASCAR consideration on this matter as well as fans overwhelming support,” Gordon responded via Twitter.

Helton said in light of the incidents that took place at Richmond, NASCAR officials will meet with drivers, crew chiefs and team owners Saturday at Chicagoland to “address and make more clear the path going forward as it applies to the rules of racing and the ethical part of it.”

Concerning the Penske and Front Row probation, France said officials “did not conclusively determine that Penske Racing and Front Row Motorsports actually did anything in terms of on the track that we can conclusively say there was a quid pro quo or altering of the event.  … We’re looking at the radio discussions, who had those discussions, the idea of a bargain that is completely off limits in our view.

It was, he said, “a set of extraordinary circumstances in multiple ways with multiple drivers and multiple teams that impacted the race.

“And the only way to address it, we believe, is the way we have, punishing the teams that participated in that in some form or fashion, and trying to see if there was a way to, in this case, make Jeff Gordon have an opportunity to race for a championship, which we believe he deserves that in an effort of a fair playing field.”

“I applaud NASCAR for taking the time for a full review. What occurred at Richmond was not of their making, and they’ve had to wrestle with some very difficult decisions throughout the week. I know everything done by NASCAR has been a sincere effort to be fair and ultimately do what’s best for our sport and our fans.

“We’re extremely proud to have all four cars in the Chase for the second consecutive season. Jeff (Gordon) and the No. 24 team earned this spot, and we’re going to leave everything on the racetrack during these last 10 (races). The support this week from our fans and partners has been incredible, and I’m proud of everyone at Hendrick Motorsports for the effort that’s gotten us here. The Chase is going to be exciting.”

Jeff Gordon Added To The Chase