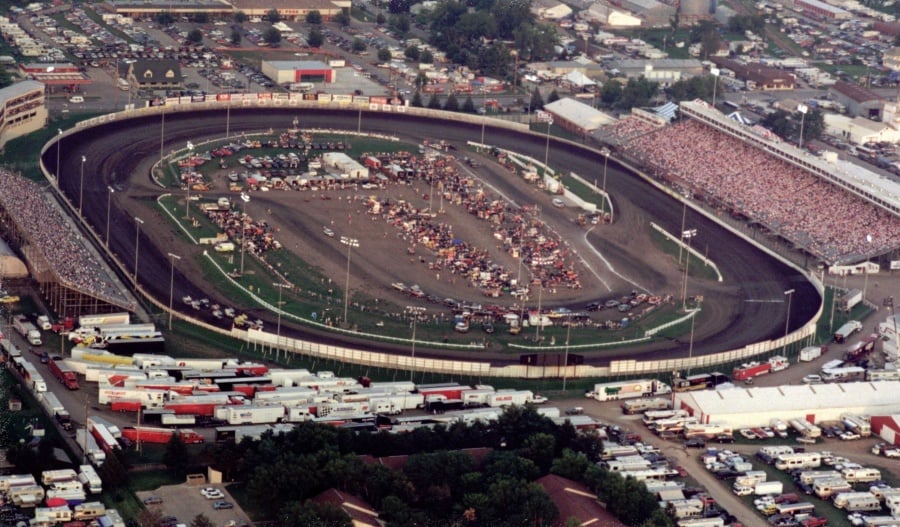 WAYCROSS, GA (September 24, 2013) – The excitement and anticipation is building for one of the biggest dirt late model events of the year with the running of the 10th Annual Lucas Oil Late Model Knoxville Nationals this weekend at the famous Knoxville Raceway. With the history and tradition of the famed Knoxville Raceway and a total purse over $270,000 up for grabs, racers and fans are looking forward to an exciting weekend of racing and the crowning of this year’s Lucas Oil Late Model Knoxville Nationals Champion. Knoxville Raceway, located on the Marion County Fairgrounds in Knoxville, IA, is considered one of the nicest facilities anywhere in the country. With a racing surface that produces thrilling racing action, a huge purse up for grabs and plenty of off-track activities, this is a must see event for any race fan.

Steve Francis of Ashland, KY won last year’s exciting event that drew a talented field of 80 drivers from all over the country. Francis has a storied career with a resume filled with series championships, crown jewel event victories and over 200 career feature wins. But Francis was quick to acknowledge in last year’s post-race press conference that he considers his win at the 2012 Lucas Oil Late Model Knoxville Nationals as one of his biggest accomplishments and wins of his career. “This is the best track for Late Models in the country, no disrespect to any other track, but this is just a phenomenal place to race, the payoff is awesome, you can start anywhere here and win. I’ve won several crown jewel events, including the World 100, but winning here at Knoxville is just amazing, an unreal feeling and probably the biggest win of my career”, stated Francis.

Francis will come into this year’s 10th Annual Lucas Oil Late Model Knoxville Nationals with a new team and a new sponsor. After piloting his own car and team in 2012, Francis now pilots the NASCAR driver Clint Bowyer owned team, Georgia Boot #15 Barry Wright House Car. Francis has two wins on the LOLMDS in 2013 and currently sits in second place in the series national championship points standings behind Jimmy Owens. Francis is coming off a 23rd to 5th place finish in last weekend’s Jackson 100 in Brownstown, IN. During his heat race, Francis’ car bicycled up on two wheels, nearly flipping over, after hitting a rut in turn one and slammed back down hard. Francis was transported to a local hospital after his heat race to be checked out after feeling severe pain in his lower back. Francis was cleared by the doctors with a lower back sprain and returned to the track and posted a remarkable drive to a top five finish that had the fans on their feet.

“That was a painful experience last Saturday at Brownstown. But we got lucky and it was lower back sprain and I was cleared to return to the track and still compete in the feature. I’m feeling better, but we went to a specialist in Indy and I have a cracked tail bone and two bulging disks in my lower back. I’m still consulting with doctors this week to make sure I do everything to heal properly but I’m cleared to race. I’m looking forward to this race and I am very excited to be going back to Knoxville. It’s my favorite racetrack, my favorite event and we’re going to try and win what I feel is the biggest event of the year for our sport’, stated Francis. To learn more about Steve Francis visit www.stevefrancisracing.com.

The award winning Lucas Oil Production Studios will be on hand to film this crown jewel event that will air on three different TV Networks in 2013, including FOX Sports 1, NBC Sports and MAVTV. The main event from Saturday night will air a total of five (5) times in 2013 with re-airs on both NBC Sports and MAVTV. The Lucas Oil Late Model Dirt Series TV package is a joint effort by Lucas Oil Products, Team Lucas Partners and the series sponsors to make it possible to bring dirt late model racing to multiple TV Networks in 2013.

Many off-track activities are surrounding this year’s Lucas Oil Late Model Knoxville Nationals, including the fan friendly Midway and Trade show – open all three days from 1PM till 7PM. The National Sprint Car Hall of Fame and Museum will be open all three days for fans wanting to visit and see the history of the Knoxville Raceway. The NSCHOF will also be the place for a special forum /sit down interview on Friday at 11:30 AM with hall of fame driver Billy Moyer of Batesville, AR. Veteran journalist and motorsports TV commentator Dave Argabright will conduct the interview that will be open to the public. Saturday’s activities include an Auction held at the National Sprint Car Hall of Fame & Museum and a special meet and greet driver autograph session in the Dyer-Hudson Hall building directly behind the main grandstands at 3PM. Last year’s driver autograph session ran for over two hours, as hundreds of fans lined up to meet, talk and get pictures and autographs from more than 25 drivers. Fans are encouraged to bring their favorite apparel and photos for the drivers to autograph.

“The series is excited and personally I’m pumped about going back to the hallowed grounds of Knoxville Raceway this coming weekend. It is one of the nicest facilities in the country with incredible racing for our loyal fans to enjoy. This year’s event is shaping up to have one of the most talented and accomplished field of drivers in the history of the Late Model Knoxville Nationals. This three day event continues to grow and is always great for our series, drivers, fans and sponsors to be involved with. We look forward to working with the many great staff members at Knoxville Raceway and just being a part of this great tradition and history of the Knoxville Raceway”, stated Ritchie Lewis, Director – Lucas Oil Late Model Dirt Series.

For ticket information on the 10th Annual Lucas Oil Late Model Knoxville Nationals go to the track’s website at www.knoxvilleraceway.com or you can call the track office during normal business hours at (614) 842-5431.

For the latest breaking news on the Lucas Oil Late Model Dirt Series log onto: www.lucasdirt.com.

Be sure to visit the series on our social media outlets as well at: http://www.facebook.com/lucasdirt and http://twitter.com/#!/lucasdirt.