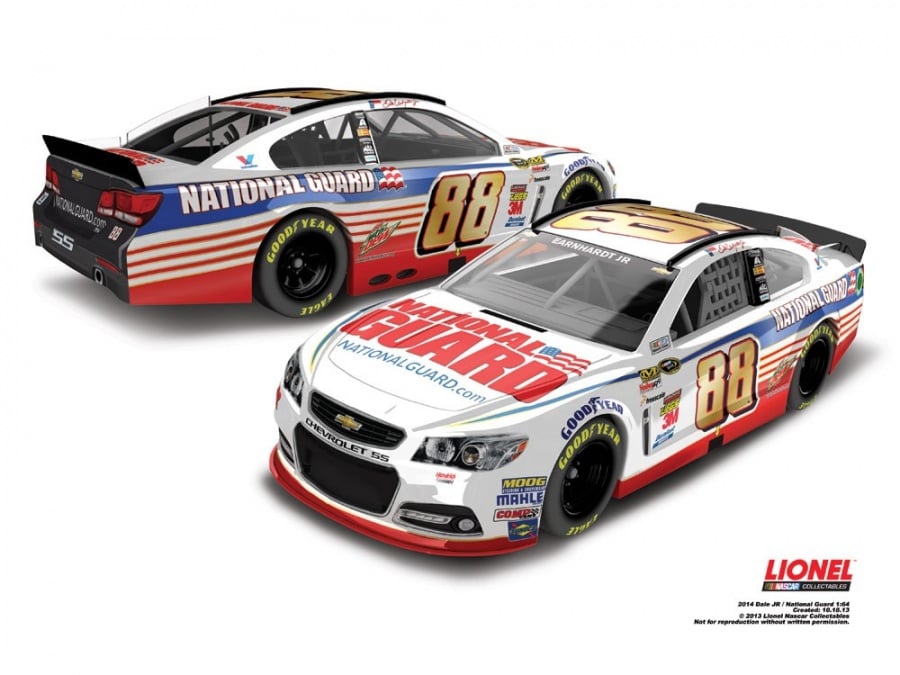 NASCAR driver Dale Earnhardt Jr 2014 paint scheme has been released. The NASCAR Sprint Cup images surfaced from Lionel Racing. Lionel provides collectable diecasts for NASCAR fans worldwide. Check out the Dale Earnhardt Jr 2014 car above to get a look at the new season ahead for Hendrick Motorsports and primary sponsor National Guard.

He’s driven. He’s determined. He’s one of the most distinguished drivers on track. Dale Earnhardt Jr 2014 will be delivering wins as he returns to the NASCAR Sprint Cup Series™ piloting the No. 88 National Guard Chevrolet SS. With added stripes on the rear quarter panel and a “dusty” 88 on the side, heads will turn as Earnhardt sweeps out the competition in his renovated ride. Earnhardt fans don’t want to miss the Action Racing Collectables die-cast of the No. 88 National Guard Chevrolet SS. With over 180 parts and pieces, each die-cast is crafted with incredible detail and is officially licensed by NASCAR®. Don’t miss out – place your order today!

Dale Earnhardt, Jr. (born October 10, 1974) is an American stock car racing driver and team owner. He is the son of NASCAR Hall of Famer Dale Earnhardt, Sr. He is also the grandson of both NASCAR driver Ralph Earnhardt and stock car fabricator Robert Gee, the half-brother of former driver Kerry Earnhardt, the uncle of driver Jeffrey Earnhardt, the stepson of Earnhardt Ganassi Racing team co-owner Teresa Earnhardt and the older half-brother of Taylor Earnhardt-Putnam. Earnhardt, Jr. has won the Most Popular Driver Award ten times (consecutively from 2003-2012). He has an estimated net worth of $300 million.