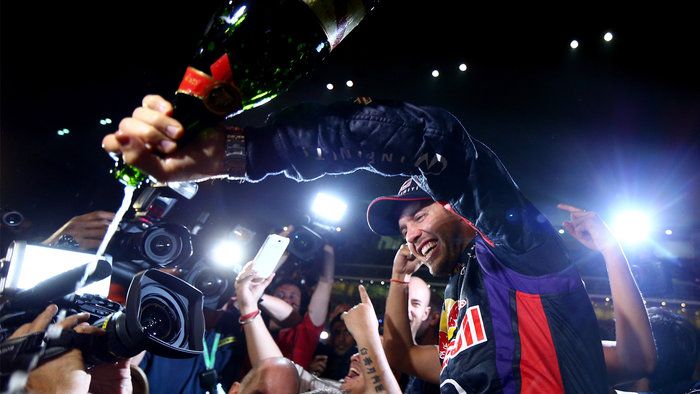 Sebastian Vettel is your 2013 F1 Champion after claiming both pole position and the win at the Buddh International Circuit in India.

“First of all I would love to say thank you to the crowds, it was an unbelievable reception today and it’s a shame we are not racing here next year. I’m speechless. I crossed the line and I was empty. I took ages to think about something to say. It’s one of these moments where you want to say so many things but you can’t. It’s been such a phenomenal season. I think the team and the spirit inside the team is so strong; I said it on the radio already – it gives me so much power. It’s a pleasure to jump in the car and go out for the guys and girls and try to give it all I have. The car was fantastic today. I didn’t think about the do-nuts before the race today – it just happened. My engineer directed for the usual procedure, but I said ‘not this time!’. There are so many people on the main grandstand here, I just had to do it. I want to say a big thank you to the team to all the people behind us. It was for sure not an easy season and even though people on the outside thought we had it in our hands, I think it was difficult. It a was tough season for me personally, to receive boos even though we haven’t done anything wrong; to overcome that and give the right answer on the track and get acceptance makes me very proud. To join people like Prost, Fangio and Michael is unbelievable. I think this is one of the best days in my life so far. There are so many people that I have to thank; I’ve always tried to listen and learn and it’s incredible to race some of the best drivers in the world.”

I THINK THIS IS ONE OF THE BEST DAYS IN MY LIFE SO FAR. THERE ARE SO MANY PEOPLE I HAVE TO THANK- SEB

ADRIAN NEWEY, Chief Technical Officer:
“It’s difficult to verbalise what these Championships mean to be honest. Coming into the weekend we knew we had a good chance for both titles, but it’s one thing thinking you have a good chance and quite another to achieve it. It’s almost a relief that we’ve done it, it’s going to take a while to sink in. It’s a tribute to all the hard work, talent and focus of the guys and girls back in Milton Keynes. We started off with a very good season in 2009, against all expectations, and to have built on that with four consecutive doubles is absolutely stunning. More than anything I’d like to thank every single member of the team for that. Sebastian must now be considered one of the all-time greats. He makes mistakes sometimes, but he always learns from them; he’s very humble and the success and fame he has achieved over the last few years has never gone to his head; he remains with both feet firmly on the ground. The atmosphere we have in the team is very good; we’re just a straight forward team and we don’t pretend to be anything we’re not. These four Championships are a result of all the hard work, creativity and enthusiasm of everyone in Milton Keynes. ”

“Seb showed his capacity to be very, very quick yet again and to come back to the front despite a very early pitstop. That was a demonstration. Mark pushed very hard from the beginning and was a serious rival to Seb until his failure. A huge result for the team today, with the quadruple double finally done and dusted! It’s a very proud moment for us to have contributed to these titles and to see the partnership go from strength to strength. It was not a perfect day with the alternator issue for Mark, but it doesn’t have to sour the celebrations for too long.”

Sebastian Vettel then climbed out of the car the 2013 F1 Champion and bowed to the machine that has brought him 10 wins already this season and made him just the fourth driver in F1 history to take four titles, alongside Juan Manuel Fangio, Alain Prost and Michael Schumacher.